I have never waited this long for a pupusa.

Then again, I’ve never done anything at the old Downsview military base in north Toronto. Well, that’s not entirely true: Five years ago, I toured its two residential streets, John Drury Drive and Robert Woodhead Crescent, to say goodbye to the little tract homes that Canadian Forces personnel had lived in since 1953. Unrenovated, Leave It To Beaver-like, and surrounded by weeds, it was a surreal experience.

But back to that pupusa: I’m a sucker for mom-and-pop ethnic cuisine, so I’ve been standing in the colourful, slapdash food court in the Merchant’s Market (40 Carl Hall Rd., launched in 2005) for 20 minutes, watching and salivating as two tiny Salvadoran women slap tortillas by hand, slowly, and cook them over a griddle jury-rigged to a residential stove. They’re chatty, smiley, and in no hurry.

Then again, neither am I. I’ve come to what is now called Parc Downsview Park, transformed by the federal government over the past dozen years, to poke around, since I’ve heard both good and bad things.

First, the bad things: It’s old news now, but many design aficionados are still smarting that “Tree City,” the 2000 competition-winning design of Rem Koolhaas and Bruce Mau, never fully took root (reasons are myriad and would take this entire space to explain). More recently, there has been considerable opposition by local groups over the new residential neighbourhoods being built around the park. Approved by Ottawa and the Ontario Municipal Board, area residents feel betrayed: They were expecting a massive, accessible green space, not a Florida-style homes-around-the-golf-course model.

I’d started my tour at the corner of Thomas Mulholland Drive and Stanley Green Boulevard. Now known as the Stanley Greene neighbourhood – the Toronto Star’s Christopher Hume called it “right out of the suburban playbook” – it’s the first of three residential communities to sprout. According to a City of Toronto staff report from 2014, 1,356 housing units “in a variety of forms” have been approved for this 25.6-hectare piece of land.

To my eye, the designs by Mattamy Homes aren’t suburban at all: flat roofs, black brick and angles abound – details I rarely see in Markham or Vaughan. Unlike those desolate neighbourhoods of McMansions, there seems to be street life here, as kids hop on their bikes and ride the short distance to the Circuit Path in the park proper.

I wanted to see the swoopy-roofed Orchard Pavilion, but I wasn’t able to figure out how to get to the Circuit Path without leaving my car and walking through a gap in some construction fencing, so I instead drove north on Keele Street to Sheppard Avenue (there are no vehicle entrances along Keele) and entered the park at John Drury Drive. While some heritage buildings and hangars have been demolished over the years, the old smokestacks of the power plant at Canuck Avenue caught my eye, so I hopped out to take a look.

Next, I drove east along Carl Hall Road and noted the enormous building that houses the Merchant’s Market (where I would later line up for pupusas) and stopped when I reached the former De Havilland administration building at No. 65. Built in stages starting in 1929, this building and Plant No. 1 behind it, where Tiger Moths and Mosquitos were manufactured during the Second World War, will soon house Centennial College’s Centre for Aerospace and Aviation.

Across the road, I ducked into a maze of white, shed-like buildings and found the Toronto Wildlife Centre, which bills itself “Canada’s largest and busiest” rescue organization. Unaware it was located here, I asked the nice lady at the counter if I was alone in my ignorance: “The [way-finding] signs that you saw when you came in, those just went up in the last year,” she said. “And since Downsview Park [subway] station was built, there’s a lot more accessibility in terms of getting here – there’re a lot more people hoofing around.”

After hoofing it back to my car, I drove past Scotiabank Pond (hockey rinks) and parked at the Hangar. Absolutely massive, this building houses indoor soccer fields, basketball courts, two go-kart tracks, Blyth Academy’s School for Elite Athletes, a rock-climbing gym, the Toronto School of Circus Arts, and probably more. On a Saturday afternoon, it’s buzzing with activity.

After pupusas and a look at the weird-yet-earnest antique and vendor mall, I found a network of nature trails – if there was a sign to help park-users located them, I didn’t see it – close to a playground featuring a whimsical, climbable Tiger Moth and airport control tower. Shady and cool, the even, soft ground of these trails made for an enjoyable walk.

While I could’ve picked my way south to the Orchard Pavilion, I had no idea these trails connected to the larger Circuit Path (again, signage would’ve helped), so I drove back to the southwest corner of the park. Here, after admiring the serpentine pavilion structure, I viewed orderly rows of haskaps and currants, then, beyond those, the enormous “lake” and fountains that help with storm water management. Lovely.

I’ve heard everything from “missed opportunity” to “mess” to “Toronto’s Central Park” used to describe Downsview Park. Unlike Central Park, the population density in this part of the city is low – it’s mostly single-family bungalows – so I welcome the new neighbourhoods; I’d even go out on a limb and champion mid-rise buildings (this may happen, as Bombardier Inc. will soon abandon the airstrip portion of the site).

As for more cohesive planning, it’s not easy when dealing with the site’s existing roads and military buildings; Frederick Law Olmsted’s only obstacles in creating Central Park were shanties owned by pig farmers. And I like the old military buildings; they give this place a past. There are also a great many things to do that root visitors in the here-and-now, like rock-climbing or eating great ethnic food. Perhaps, when attendance swells in the future, a real restaurant with table service and a view of the water will be built.

Speaking of which, when Downsview Park’s trees have grown as tall as Central Park’s and north-of-the-401 stigma has vanished, this might well become one of the most happening spots in the city … and not just for the pupusas. 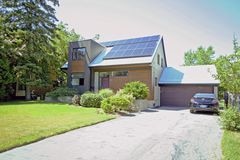 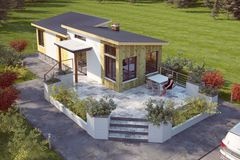 Taking architecture app Driftscape for a stroll around Toronto
June 26, 2018 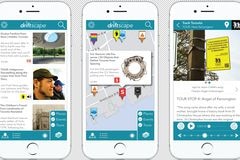