When Anai seeks a place to think, work, or even celebrate her daughter’s 19th birthday, she leaves her apartment on 275 Bleecker St. in Toronto’s St. James Town.

In early March, her balcony – along with the rest of the units in her building, owned by Toronto Community Housing Corporation – became a construction site.

Inside her home, there is no fresh air or natural light. The only window in the apartment, like most of the units in the building, is on the balcony door. If she wants privacy from construction workers, she has to keep the curtains closed.

For 14 years, ever since she moved to Canada, Anai has lived in the St. James Town building. She is a member of Community Matters Toronto, an organization that strengthens relationships between neighbours of 60 different cultures living in the area.

But, at a time when public health officials encouraged people worldwide to stay indoors, her kids left the apartment to do school work. Often, they sat on a patch of grass outside of a nearby grocery store to participate in class video calls.

Construction in downtown Toronto is not a new or rare problem. But in St. James Town, the pre-existing conditions of exceptionally high density and minimal green space have made this particular situation dire.

In the area, there is only one public park, located between Bleecker Street and Sherbourne Street.

More than 36 per cent of people who live in the neighbourhood are within the low-income bracket, according to Statistics Canada’s most recent data. In the mid 1950s, the area became a hub for newcomers and many immigrants from the Philippines, Nepal, India, Iran and many other countries gravitated to St. James Town. The downtown location and affordable housing were significant factors. Today, nearly 60 per cent of residents are immigrants.

More than 2,000 households have insufficient bedrooms for the number of people in a dwelling and fall below the national standard, the city profile states. Over the past decade, two major fires at apartments on Wellesley and Parliament Streets, have resulted in the displacement of thousands of residents, in the later case, for nearly two years.

In 2018, a master plan was developed to improve St. James Town. One of the key goals was to create more open and safe green space. Before the pandemic, Ward 13-city councillor Kristyn Wong-Tam had promoted plans to build a new park adjacent to 200 Wellesley St. E., but the project has been put on hold.

“Across the city, low-income neighbourhoods are being disproportionately impacted,” Ms. Wong-Tam says. “[These] buildings and neighbourhoods were never designed to handle a pandemic.”

Daniele Gauvin, TCHC’s senior communications advisor, says the construction at 275 Bleecker St. is “urgently required” because many of the balcony railings are “structurally unsafe.” The work also includes other repairs, such as replacing window ledges in poor condition.

The project was scheduled in 2018 and should be completed in late 2021. TCHC has a significant cumulative backlog of repairs, which amounted to approximately $1.6-billion last year. Balcony work has been slated at TCHC apartments throughout the neighbourhood, one of which is ongoing across the street from 275 Bleecker.

In June, balcony construction began on Darlene Hopper’s unit at 325 Bleecker St. “I thought I was going to have a nervous breakdown,” she says.

During the pandemic lockdown, the 74-year-old stayed inside for two months, as advised by health officials. But when construction began on her unit, she was desperate to escape the noise and started going on daily excursions with her sister to McDonald’s.

“I am under no illusions that this work, despite likely being necessary, creates a tremendous hardship on tenants in the best of circumstances,” Ms. Wong-Tam says.

In April, Ontario Premier Doug Ford announced that construction projects that began before April 4 were deemed essential and legally permitted.

“Either you can have the construction or have public safety. They made their choice,” says Maazin Aljahma, a 19-year-old who has grown up in 275 Bleecker St.

If he wants fresh air, the alternative to his balcony is venturing outside, which requires taking the elevator with other tenants. Then, he has to cram into a narrow lobby where the front entrance is blocked off by construction, filtering the entire 22-storey building’s population through the back door. Not ideal in a pandemic.

He lives with three family members in a two-bedroom apartment. The balcony is a crucial part of their shared space and has been even more vital during the pandemic.

“I rely on my balcony for so much right now,” he says.

During the lockdown, Mr. Aljahma was working towards completing his final credit of high school. But in his apartment, the walls, floors and ceilings shake while the sound of jackhammers clang through the walls. When he opens his window, dust and noise seeps in.

If it wasn’t for the empathy of his teachers, he says, he might not have completed his last credit.

“All I wanted was for them to postpone it,” Mr. Aljahma says. “I understand redevelopment … but at what cost?”

Editor’s note: A pseudonym has been used in this article to protect the safety of an individual. 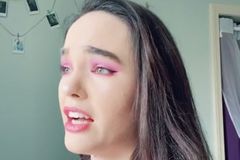 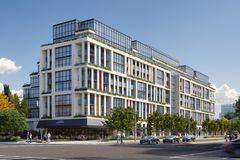 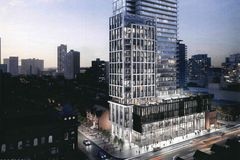