It’s no wonder the early, less-is-more Modernists – and indeed the neo-Modernists practising today – rejected the gable roof: In Western countries, it’s one of the oldest architectural forms. Worse, it was often decorated with scrollwork, urns, statuary and a lot of other unnecessary ornament.

But, to some enlightened folk practising today, the gable need not generate panic. In fact, done correctly, the gable can transform from anathema to aesthetically pleasing, especially when one is designing for somewhat conservative clients.

“They remind me of my aunt and uncle,” says architect Gloria Apostolou of Melinda and Edwin Santiago, “so I had in my mind, ‘What would I design for them?’ Nothing too crazy, from the exterior, anyway, it fits in, they didn’t want to make a statement, they didn’t want the neighbours to talk about their fancy house.”

There is fancy stuff, of course, but most of it hides on the inside, offering only peek-a-boos to the passerby. To most dog walkers and kids-to-school walkers, this Etobicoke bungalow looks remarkably like its neighbours: demure, reserved, low-slung and gloriously gabled. In fact, the gable end that faces the street looks just like it did before Post Architecture Inc. laid loving hands on it; only the brick underneath has changed, getting tinted from the usual orangey-red to a cool dove grey.

And when it came time to design a second storey for this formerly 1,000-square-foot, one storey home, Ms. Apostolou tucked it well behind the street façade and, on top of that (pardon the pun), placed it under a second, shallower-pitch gable. Glorious, huh? She also resisted the temptation to go gaga with glazing, placing small(ish) windows here-and-there – such as the kitchen ‘backsplash’ which is always a neat visual trick – rather than ask this humble abode to pretend that it’s in sunny California rather than a few kilometres from the Ontario Food Terminal.

So unpretentious is this home, most of the ground-floor ceiling still measures a very suburban eight feet. Step inside the front door, however, and you won’t notice. No, your eye will immediately zoom upward to the portion that celebrates the gable shape via a double-height living room. Here, as light pours in and air circulates around ornamental collar ties (which add visual interest and shadow-play), the illusion of a much bigger home is created.

“I think the height is the hard sell to some people,” Ms. Apostolou says, “because you’re paying for volume, you’re not paying for floor area.”

And speaking of cost, the home’s to-the-studs renovation and addition came in at a remarkable $525,000 even though it looks like a million bucks.

“For that you can thank my wife,” Mr. Santiago quips. Formerly head of finance for Colgate North America, Melinda Santiago “knows how to look at numbers, how to dissect it, dive in,” he elaborates. “We participated in everything that Gloria and Danny [Pyrsos of Inline Design + Build] provided us.”

Looking around, it’s hard to believe Ms. Santiago’s red pen slashed through much, although all parties claim that this was indeed the case. Under that double-height ceiling is a fireplace, its charcoal-grey hearth stretching across the room to do double-duty as the bottom of the staircase. As visual bookend, the beefy I-beam holding the second-floor addition aloft was painted the same colour, and then framed in as if it were art. Beyond the beam, the semi-IKEA, semi-custom kitchen cabinets are a study in black-and-white, and, for half the year at least, the window overlooking the backyard is every shade of green imaginable. Plenty of shelving and cabinetry keeps everything organized and tidy.

The “supercompact” 750-square-foot second floor offers visual and textural goodies also. The red oak underfoot contrasts with the slanted, creamy-white walls, and two of the three bedrooms offer a unique vantage point onto the airy living room via openings. Providing a dialogue and interaction between floors, these ‘windows’ can also be shuttered if their occupants desire privacy.

And speaking of privacy, Ms. Apostolou had to fight to keep the second-floor bathroom window unfrosted. When the Santiagos – who “didn’t even want a second bathroom upstairs,” says the architect, still surprised – asked for frosting, she assigned them homework: one of you stand in the shower, naked or clothed, and send the other down onto the street to play voyeur. Nothing could be seen, so the window stayed clear.

In the basement, Post Architecture moved the staircase, created a laundry room, and added visual interest by exposing the joists. There is also a large area for a drum kit and synthesizers (the Santiagos, while empty-nesters now, have a very musical family). And just like the other two floors, the results are cozy and familiar. Perhaps that’s because of the scale, Ms. Apostolou says: “I work with one builder in particular on a lot of my projects, so his trades get to see a lot of the houses, and this house was their favourite, and meanwhile we were doing a 2000-square-foot house [in] downtown Toronto but everybody loved the scale of this one.”

“We love it,” Mr. Santiago agrees, “and people that come in, that walk their kids to school, they always come back and say, ‘is it possible to ask you a few questions?’” 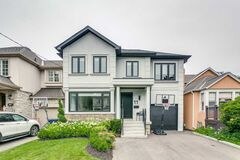 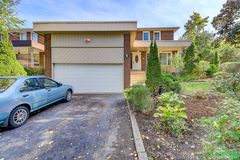 Home of the Week: A Cabbagetown semi loaded with charm
January 11, 2019 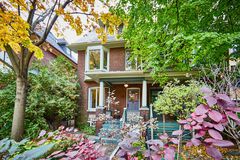