Just like Freud’s cigar, sometimes a garage is just a garage.

Add an easy chair, a few road signs, some petronalia – old oil cans and maybe a gas pump – and it becomes a man cave.

But, in the hands of a talented architect and a willing client, it becomes … a gem?

“That’s what he called it, the ‘garage gem,’” co-founder of Office Ou Sebastian Bartnicki, 35, says of his client, Craig Follett, 34. Interestingly, the pair had been best friends in Grades 2 and 3 at River Oaks Public School in Oakville, Ont., but had lost touch by high school; Facebook, as it often does, reunited the pair.

“We were just catching up and then he mentioned that he had this project that he was thinking about starting,” Mr. Bartnicki says. “He had spoken to a couple of different architects … but I was intrigued with his idea that it was a very precious backyard pavilion-retreat.”

It would be a space that Mr. Follett “could have experiences in, that actually expands the backyard and draws in community.”

It was 2016 and Mr. Follett was in the process of closing on a lovely old house in Toronto’s Trinity-Bellwoods neighbourhood – once owned by an HGTV celebrity – when his old Lego buddy paid him a visit. While Mr. Follett had been looking for a house that faced a park, he instead had purchased something on a wider-than-average street on a corner lot; that lot allowed any structure the pair might built together to breathe, and perhaps even contribute to the streetscape.

Which meant it had to be good.

Since any regular, opaque garage building would turn his new backyard into a sad place devoted solely to the automobile, Mr. Follett showed Mr. Bartnicki inspirational photographs of greenhouses, deluxe sheds and little stained-glass buildings. They discussed an all-glass structure, with, perhaps, coloured sections on the roof; they discussed an iridescent film, much like the one on the Umbra building in downtown Toronto, but thought that technique might look “dated” in a few years. They discussed fabrication: Could a greenhouse system be used?

An architectural model was made about halfway through the design process, along with renderings and preliminary drawings. When Mr. Bartnicki went to city hall in search of a permit, he was relieved to find the people in front of him were getting approvals for much the same thing, so he didn’t have to explain the concept in too much detail. He did point out, however, that the little, transparent garage gem would do the neighbourhood a solid by filling in a gap in the streetscape.

Before construction began, two things were settled: A glass roof would get awfully dirty in autumn – the pair made the decision to cantilever one corner of the new building so it wouldn’t damage the roots of a big and beautiful mulberry tree – so a more loft-like post-and-beam roof of Douglas fir was chosen; and, since greenhouse systems were both chunky and limiting, custom fabricator Bliss Nor-Am Steel Doors and Windows was selected to manufacture the walls.

“Their products are expensive but very solid,” says Mr. Bartnicki, running his hand along one of the slim, black mullions. “It’s crazy, you see these old steel windows on all the old industrial factory buildings, it used to be cheap, now it’s a luxury.”

For the floor of the 430-square-foot building, Mr. Bartnicki had first specified prefabricated terrazzo tiles, but, once he discovered Zita Terrazzo and Tile could pour the old school version for less money, he went with that (although that wasn’t cheap either, cost was $55 a square foot). “We were actually very lucky to find [Luigi Zita]; I don’t think there are a lot of people who still do terrazzo on such a small scale.”

The result is a gem indeed. The black steel building sits fairly lightly on the landscape, a frame so thin it appears to flaunt the laws of physics. And, luckily for the neighbours, if that somewhat Miesian, TD Centre-like quality is still too heavy, visuals are softened considerably by the golden wood beams and columns tucked just inside and by the wall of Douglas fir-veneered cabinets. Even some of the terrazzo’s aggregates pick up on the Douglas fir colour (Mr. Bartnicki says he was able to choose sizes and colour combinations).

Night is when the garage gem really makes its presence known. Illuminated by fixtures manufactured specifically for the project by the American husband-and-wife team at Roanoak Co. – a slimmer sexier take on the ubiquitous Swedish ball – the building transforms into a lantern.

And, like a moth to a flame, “that’s where we eat dinner, that’s where I’ll go read, it’s like a living room,” says Mr. Follett, who looks down at the Porsche currently getting in the way of all those activities. Once it’s parked on the street, however, Mr. Follett plans to share the space (only completed at the end of last summer) with the rest of city as a “micro event” venue. It’s a logical extension of his work at event-hosting website Universe.com

“For us, what makes the project really interesting is you’re finding a way of intensifying the city, instead of these dead spaces of garages that are just storage,” Mr. Bartnicki says. “You put a little more thought into it and [it] can have all of these different lives.” 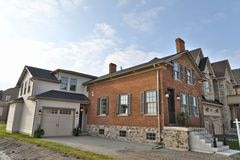 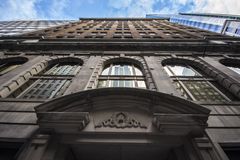 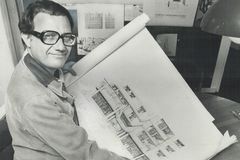