The same day that Ontario shut down all non-essential businesses in the province to mitigate the spread of the novel coronavirus, Colleen Higgins put her home on Crawford Street up for sale.

The timing was far from intentional, she told The Globe and Mail.

Ms. Higgins and her husband Andrew Unsworth, a realtor who eventually sold the home in the midst of the lockdown, had been planning the sale for months, undergoing applications and renovations to create a legal basement to make the property more attractive to future buyers and homeowners.

When they saw the shutdown looming, “we scrambled to get the house ready before the world froze, only to feel that we were a day late and a dollar short,” Mr. Unsworth said.

Ms. Higgins says the timing “felt disastrous,” especially as the couple was expecting their first child at the end of this summer and preparing to move on to a different home to start their family.

Back in 2016 when Ms. Higgins bought the house for $1.183-million, the property only stayed on the market for eight days. This time around, the Crawford Street home loitered for almost three months, during which the property relisted from $1.659-million to $1.590-million, before selling at $1.575-million in mid-June.

The couple said that the wait was difficult, especially because Ontario had banned open houses during the lockdown and it seemed like everything was at a standstill. They say, though, that the newly renovated legal basement apartment definitely helped them with their chances of selling the property.

“I’ve found that Toronto’s buyers are very savvy,” said Mr. Unsworth, who added that he often had potential home buyers ask right from the start whether the basement was permitted.

“To be able to say ‘yes’ provided huge confidence and assurance … that it was a sound investment,” he said.

Toronto is the fastest growing city in North America, according to a 2019 report by Ryerson University’s Centre for Urban Research and Land Development; the Greater Toronto Area’s population is projected to nearly double in the next 26 years, from 6.8 million in 2018 to more than 10.2 million by 2046, according to Ontario.

This means that issues such as densification and housing affordability has been top of mind as the city’s population grows but housing remains limited.

Secondary suites, which in Toronto often come in the form of basement apartments or laneway houses, became more readily accessible in the city after an amendment was passed last March by City Council.

Under the new regulations, secondary suites would be allowed citywide, with size and the formerly mandated parking minimums removed.

The new regulations are a way to add “gentle density” to some of Toronto’s many older and more suburban neighborhoods, according to Gregg Lintern, Toronto’s chief planner.

Mr. Lintern said that the city is just now starting to collect and look at how many houses citywide have added secondary suites since last March. In older parts of Toronto that have historically had permission to add secondary units, Mr. Lintern says that there have been around 2,500 additional housing units added over the past decade.

Typically, Toronto issues an average of 248 permits for secondary suites in a given year. Looking at the number of permits already issued in the first six months of 2020, however, Mr. Lintern says it to be an “above average year.”

“Six months into 2020, we are at 75 per cent of our average,” Mr. Lintern said in a recent tweet, meaning that Toronto has already issued 186 permits for secondary suites this year.

Mr. Lintern says he’s found an openness among residents of Toronto’s older neighbourhoods to having conversations about how to increase housing options, especially if they offer solutions that work “inside the box” of preserving character.

There are still likely thousands of illegal basement apartments in Toronto, according to Mr. Lintern.

Basement apartments in general, whether legal or illegal, have been important sources of naturally occurring affordable housing in Toronto for a long time now, according to Emily Paradis, who teaches urban studies at the University of Toronto.

Illegal basement apartments can risk the health and safety of their occupants, Ms. Paradis says. But when they’re renovated, permitted and meet all the health requirements, she says, they may no longer be affordable for those with low-incomes.

“It’s a dilemma we often hear discussed,” Ms. Paradis says, but “the business case really isn’t there” for the homeowner to bring their basement apartment up to code if they can’t profit from their investment by raising the rent.

For homeowners who are looking for additional sources of income each month to help with their mortgage payments, the incentive to convert their basements into permitted apartment dwellings is strong.

“The nice thing is, it’s worth more, right?” said Brendan Charters, development manager at Eurodale Developments, who worked with Ms. Higgins and Mr. Unsworth in renovating their basement apartment. “You can rent it for more, it’s worth more to you as a property owner and it’s also worth more to someone that’s looking to purchase it.”

“There are costs to make it legal, but there are also benefits,” Mr. Charters said.

Ms. Higgins said that her original budget for renovating their basement apartment was around $50,000 to $60,000. But the couple ended up spending more than double that amount once they “opened up the basement” and saw that the job was much bigger than expected.

Still, Ms. Higgins said, the upside outweighed the unexpected costs. They saw the positive impact of a legal basement apartment on the house’s resale value, and how attractive having one was to potential buyers.

The couple also said they wanted the peace of mind that came with having a house that was up to code and followed the latest safety guidelines.

And they say the basement apartment was a “game changer” for them as they tried to market the house in the midst of a pandemic.

Because of open house restrictions, none of the potential buyers were able to see the property in person, meaning that Mr. Unsworth was often walking around the house with his cellphone, personally guiding virtual tours.

“[The basement unit] really distinguishes this house from other dwellings,” Mr. Unsworth says. He says he felt many buyers were looking for a place that provided the rental security of a legal secondary suite, especially amid the economic uncertainty that came in the pandemic’s wake.

Mr. Unsworth says that he guesses the legal basement apartment added between $150,000 and $200,000 in added value. Moreover, he feels the legal suite allowed for a bigger pool of prospective buyers because the income potential could support a larger mortgage.

The buyers that did end up getting the house are a family with two children, according to Ms. Higgins and Mr. Unsworth, who say they plan to rent out the space.

Home of the Week: Bathurst space serves as office and sprawling home for an extended family
July 29, 2020 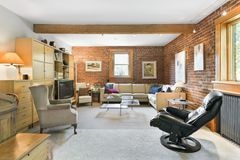 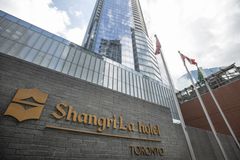 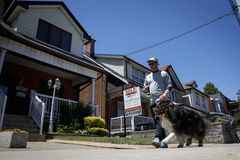