Real estate agent Andre Kutyan has some blunt advice for sellers who are sitting on property in the Toronto-area real estate market: The time has come to abandon lofty expectations.

Mr. Kutyan is encouraging many of his sellers to aggressively reduce their asking prices now in a last-ditch effort to sell before Christmas.

“I get pro-active with my listings now,” said Mr. Kutyan, of Harvey Kalles Real Estate Ltd.

Some sellers are listening, he says, while others are hanging on with what Mr. Kutyan calls “false hopes” the market will pick up in the new year.

Mr. Kutyan says houses above the $2-million mark are most likely to sit at this time of year. Developers who tore down small houses to build large luxury homes may find themselves in a particularly tough spot, he says, because they face a lot of competition in some areas.

Mr. Kutyan says most of the sellers who are listing in that price range at this time of year are builders who have recently finished a project. In other cases, the newly built homes have been sitting since the summer or early fall.

Often the properties that are sitting are hampered by a second-tier location. Buyers will still move quickly to secure a newly built house in an ideal setting, Mr. Kutyan explains.

He points to one example that buyers have passed over at 80 Fairholme Ave. in North York. The five-bedroom house with 3,861-square-feet of living space is currently listed with an asking price of $2.349-million.

When it first arrived on the market with another agent in May, the asking price was $2.699-million.

At the time, the owner called Mr. Kutyan for an evaluation. Mr. Kutyan said the house was unlikely to fetch more than $2.4-million because of its address, just one street south of busy Lawrence Avenue West.

Mr. Kutyan says many people want to get into the neighbourhood near Bathurst Street and Lawrence, but they expect a discount on the asking price if the house is close to a major thoroughfare.

The seller went with another agent in May and the house languished. The seller recently returned to Mr. Kutyan and agreed to try an asking price of $2.4-million before slashing it again.

Another property at 232 Carmichael Ave. has similar drawbacks to the location. It was listed in the early summer with another agent who set an asking price of $3.199-million.

Mr. Kutyan took over the listing in late October and started with an asking price of $2.79-million before recently trimming it again to $2.649-million.

Mr. Kutyan says builders and their agents often set an asking price that would be more fitting for a house in a location with an "A" rating.

“I’m very often the second or third listing agent on a property. They had no business being at those A prices,” he says.

Mr. Kutyan says he sees many builders who make the mistake of spending too much on luxurious finishes in order to offset a B or C location. Then they need to reap a very high sale price in order to make a profit.

“You have to spend less on construction to attract that budget buyer. Don’t just throw in the bells and whistles to make up for the location.”

Mr. Kutyan says sellers run into trouble when their expectations are more inflated than the price buyers are willing to pay.

Mr. Kutyan says rising interest rates and mortgage stress tests make it difficult for many buyers to afford houses priced above $2-million. He doesn’t see that formula changing in 2019.

The betting on Bay Street is that the Bank of Canada will raise rates again at the meeting of its rate-setting committee on Jan. 9.

At Bank of Montreal, chief economist Douglas Porter cautions that the longer extreme lows for Canadian oil prices persist, the greater the economic damage for Alberta and the country.

Mr. Porter’s forecast still calls for the central bank to hike rates in January and twice more at later meetings in 2019. But he stresses that his prediction relies heavily on the assumption that Canadian oil prices will make a modest comeback in the next six weeks.

A prolonged and deepening slide in oil prices could prompt the market to rethink the Bank of Canada’s outlook, Mr. Porter says.

Bank of Canada Governor Stepeh Poloz is slated to speak in early December, he points out.

“If oil prices haven’t budged by then, market sentiment could shift in a hurry right around that time,” Mr. Porter says.

Mr. Kutyan says stubborn real estate sellers who refuse to reduce their asking prices are being unrealistic, in his opinion.

Mr. Kutyan believes builders who hold out for a pick-up in the market are taking a risk. They may not get a better price, he says, and in the meantime they have monthly expenses in the form of heat, hydro, insurance and financing costs.

In many cases, builders have taken out loans from B lenders at very high rates of interest, he adds.

“For them, it costs them money to hang onto it.”

As for buyers, those looking at this time of year are hoping to strike a good deal.

“There are some bottom-feeders out there,” he says. “They’re there to do a deal. They’re trying to fish out who’s the most desperate.”

Buyers are keeping an eye on interest rates and many of them are cautious, he says.

In this case, the sellers were not builders but homeowners who wanted to downsize.

Mr. Kutyan pointed out that there were 25 competing properties for sale in the surrounding area. Clearly, they were sitting at inflated prices, so he recommended setting a more realistic asking price.

With the asking price set around his estimate of fair market value, Mr. Kutyan brought the owners four offers in 10 days.

Even then, some bidders were lowballing, he says.

“At least we had the opportunity to negotiate.”

The house sold for $3.88-million. Meanwhile, the neighbouring house was relisted with an asking price of $3.949-million. It still failed to find a buyer and was eventually taken off the market. 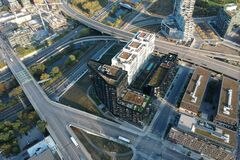