Toronto’s renowned Integral House has hit the real estate market with an asking price of $21.5-million.

Investment executive Mark Machin and his wife, Melissa Mowbray-D’Arbela, are selling the landmark work of architecture at 194 Roxborough Dr., after purchasing the property in 2016 for $14.9-million.

The family plans to stay in Toronto but a change in lifestyle has prompted the sale of the 17,000-square-foot house. Mr. Machin will remain at the helm of Canada Pension Plan Investment Board, where he is chief executive officer.

Real estate agent Janet Lindsay of Chestnut Park Real Estate Ltd. says the house is listed on the Toronto Real Estate Board’s Multiple Listing Service and agents will be invited to tour the property during an open house this week.

“We intend to market it internationally,” she says.

Ms. Lindsay says the location, the two-thirds acre of land, the architectural significance and the one-of-a-kind artisanal features were all factors in deciding on an asking price. The replacement value is estimated at $32-million, she says, and compared with other properties listed in that price range, she believes the price is competitive.

The award-winning house was built on the slope of a wooded ravine in Rosedale by the late mathematician and musician James Stewart and completed in 2009. A professor at Hamilton’s McMaster University, Dr. Stewart made his fortune from a ground-breaking series of calculus textbooks.

Dr. Stewart commissioned Shim-Sutcliffe Architects to design a house that uses curves as an architectural expression of the beauty of calculus.

The professor, who was also a violinist with the Hamilton Philharmonic, interviewed a short list of architects that included the famed Frank Gehry, Ms. Lindsay says.

“In that dialogue, he became convinced that to blend the rational and the emotional, he ought to have a concert hall where he could perform as well,” says Ms. Lindsay.

Ms. Lindsay says Dr. Stewart spent $32-million to build the house, which presents a modest two stories to the street but cascades down into the ravine with three additional levels.

The vertical glass walls are modulated by 97 white oak fins.

Review: Integral Man is a loving portrait of Jim Stewart and his home

Throughout, the house is loaded with mathematical symbols - starting from the front door, where the handle resembles the letter S.

Such curves require double integrals, Dr. Stewart explained in 2007 when the house was nearing completion.

Mr. Machin, says the complex symbolism is not lost on his young daughters.

“People of any age appreciate beauty. Also my daughters are good maths students and appreciate the under-pinning of calculus which inspired the curves," he said in an email.

The house has four bedrooms plus two additional bedrooms in a guest suite.

An infinity-edge pool has a disappearing wall that makes the indoor pool an outdoor pool as the glass slides out of sight.

Visitors arriving to the front door pass a reflecting pool and sculptural fountain which reflect the play of light and shadows onto the interior walls and ceilings.

Mr. Machin says that extraordinary use of light and water is his favourite aspect of the house.

One of the most striking features is the staircase of cobalt blue blown glass leading to the bedroom level.

Another dramatic space is the double-storey performance venue with undulating windows overlooking the ravine and galleries above for onlookers.

Mr. Machin says the home’s future owner and conservator will discover that some elements can only be discovered by residing there.

“One can only appreciate the light and the change of the seasons by living in the house. The closest is to watch Joseph Clements extraordinary film Integral Man which captures some of the atmosphere.”

Shim-Sutcliffe were awarded a Governor-General’s Medal for architecture for the project.

Despite its low-key presence on the street, Mr. Machin says Integral House does not go unnoticed.

“The only drawback is that because the house is so striking and beautiful it sometimes attracts curious visitors.”

Ms. Lindsay represented the Machin family in purchasing the house when they moved to Toronto from Hong Kong so that Mr. Machin could take the top job at Canada’s largest pension fund.

The couple were drawn to the home’s architecture and the opportunity to continue Dr. Stewart’s tradition of holding philanthropic benefits.

Ms. Mowbray-D’Arbela already had ties to the city; she studied architecture at the University of Toronto before she also entered the world of finance.

Since they took ownership, Mr. Machin says, the concert hall has been used for a variety of music performances, including for the Toronto Symphony Orchestra and other gala events.

“But it is also a fun family room and accommodates a huge Christmas tree!”

The Machins have not made any significant changes to the house during their tenure.

Ms. Lindsay says the luxury segment has suffered from a lack of listings in Toronto, but recently the Rosedale market has sprung to life.

She says five houses that were listed on the MLS in the $4.5-million to $7-million range have sold over the past four weeks or so. Some properties were recent arrivals on the market while others had recently had a price trim.

Ms. Lindsay says she knows of three others in that price range that have sold privately in the same period.

“When properties represent market value, the buyers will act.”

Integral Man captures the many angles of James Stewart and his dream home
April 25, 2017 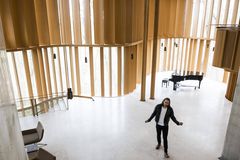 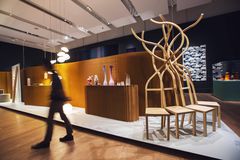 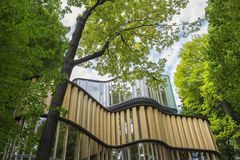