Stella McCollum hasn’t hosted a real estate open house for more than a year during the Coronavirus pandemic, but she saw a rare property in Hamilton as the ideal setting for a return to the weekend afternoon tradition.

Ms. McCollum had already rented a grand piano for the five-bedroom home at 32 Aberdeen Ave. When she decided to hold Saturday and Sunday public open houses, she brought in musician Adrean Farrugia.

“It was just screaming for a grand piano,” she says of the 1,000-square-foot great room. “I said, we have to have a pianist play. This home is for someone who will love entertaining.”

The house at 32 Aberdeen Ave. is listed with an asking price of $2.289-million and offers such European influences as a mansard roof, arched windows and a cobblestone courtyard. Inside, the house is topped by a domed skylight that brings light through the centre.

“You need to be in the space to really appreciate the magnitude of the architecture and the design,” says the broker at Sotheby’s International Realty Canada. “The right person might not know this is the house for them before they walk in.”

Open houses have been allowed in Ontario only since July 16, when the province reached stage three of reopening.

The Ontario Real Estate Association acknowledges that a large portion of agents are in no hurry to hold open houses and provides guidance on how to hold them safely.

Many brokerages, including Ms. McCollum’s Sotheby’s office, are approaching the reopening cautiously, with a gradual return to open houses only for a few properties and lots of safety protocols.

On Aberdeen, the owners are not currently living in the house, Ms. McCollum says, and the 7,000 square feet made it easy for her and her colleague to prevent crowds from forming.

Ms. McCollum says the addition of live music made the atmosphere a little more celebratory. She senses that people are keen to feel a return to normalcy.

Despite a steady downpour on the Saturday afternoon, people came to the door, where they could sign in using their phones.

“I was hesitant – I honestly did not expect a lot of people,” she says. “We had people streaming through all day.”

On Sunday the weather brightened up and she served sparkling water in the garden.

There was also a fair amount of curiosity about the house on Aberdeen, which has belonged to a prominent steel magnate, served as an inn, and for a time housed six players on the Hamilton Tiger Cats football team.

Move-up buyers also tend to stay within the area, she says.

“We get a lot of people who will move from house to house in the neighbourhood.”

But it’s not a strategy he plans to use for every property. Mr. Regan says the decision is ultimately up to the seller, but he goes through all of the pros and cons with the homeowner.

For his office, the property that launched the return of the open house was a three-storey townhouse in Mississauga’s Port Credit neighbourhood with an asking price of $1.6-million.

At the time, the home had been on the market for three weeks already. It will most likely appeal to downsizers who don’t mind having a patio instead of a backyard, Mr. Regan says.

“It will appeal to a smaller segment of the marketplace,” he says. “With that property, we were on the market long enough that we were not concerned we would have a line-up of people.”

Houses in that segment tend to attract a lot of traffic, he says.

“Some are so in-demand, you might have a line-up of 30 or 40 people down the sidewalk,” he says, adding that it’s hard for the agent present to handle crowd control.

What’s more, the horde might be blocking a serious buyer with his or her agent who might decide not to wait around.

“They may just not want to wait in line with nosy neighbours,” he says. “We don’t want those people waiting in line. We want to usher them to the front of the line.”

Broker Andre Kutyan says he built his career by hosting open houses but he doesn’t expect to use them as often in the future.

“I think it’s an antiquated way to sell a house,” he says. “I think there are certain things that have changed forever.”

Mr. Kutyan says some sellers insist on an open house and, in the case of a newly built vacant house, the strategy may make sense.

But virtual walk-throughs, 3-D tours and photographs allow people to eliminate a lot of properties without visiting in person.

During lockdown, the offer-to-showing ratio increased significantly, he says, because people who were booking appointments were serious buyers.

For agents starting out in the business, open houses are a good way to meet potential clients, he says.

“That’s our storefront in this business.”

Mr. Kutyan says he has also mainly given up the practice of holding open houses for agents from other brokerages. At high-end properties it was customary to serve a catered lunch, he says.

“I had serial agents who would just return to eat the free food,” he says, laughing. “I’ve never, ever seen them sell one of these houses.” 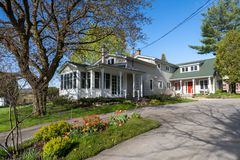 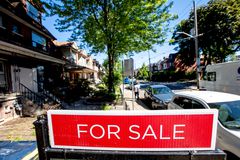