Darrell Sargent, Calgary’s co-ordinator of citywide planning, hasn’t lived in Calgary long, but the New Zealander says he understands one of the city’s most pressing problems.

“Calgary is like Christchurch in that they both sit on large, flat pieces of land, so they both have the same problem: It’s been too easy for the city to sprawl,” he says.

Addressing that issue has been a priority for the municipal government for the past seven years and, in 2016, it hopes to introduce incentives for developers to help the city grow upwards, not out.

“We’ve had a strategy for increasing urban density since the Plan It Calgary proposal was launched in 2009,” Mr. Sargent says. “The proposal marked a big shift for the city and a reach for greater density in established communities.”

Plan It Calgary outlined a 60-year plan for the city to make it more efficient and economical by reducing urban sprawl. By increasing density, the city could reduce the volume of roads and infrastructure and in the process reduce property taxes and improving the city’s bottom line.

“It sounds extreme,” Mr. Sargent says, “but the risk, if you don’t produce a more compact form, is bankruptcy. Other North American cities have gotten themselves into hot water by not doing that.”

The City of Calgary has established firm density targets for greenfield sites, though the targets are looser for established communities. The current strategy focuses on intensification around the 18 proposed stations of the Green Line LRT and a main-streets project which will target 24 established neighbourhoods including Bowness, Kensington and Marda Loop.

Mr. Sargent says consultation with developers has been “extensive” and “challenging.” 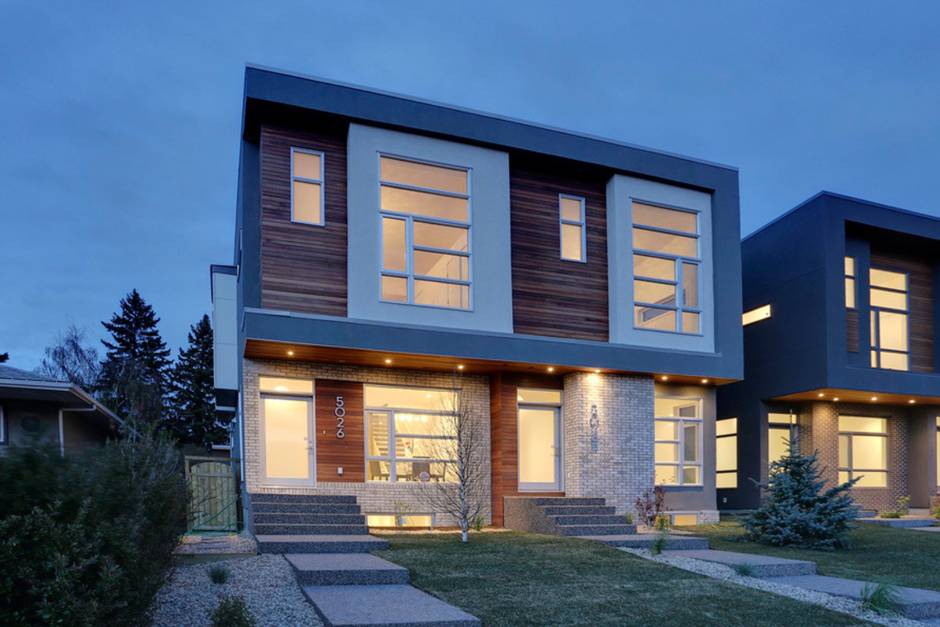 “Calgary developed in the same way for a long time. Developers had their product, they honed it, they’d got the costs down. When the city came along and suggested maybe two houses rather than one, it really set the cat among the pigeons.”

He hopes the introduction of an incentive scheme later this year that will put densification higher up on developers’ lists of priorities.

“We started exploring it a couple of years ago and it fell by the wayside, but now we’re kick-starting it again. We need to find a model that works. Is it a dollar incentive for developers? We don’t know yet, but we do know it’s an important piece in the picture.”

It’s a move that could financially benefit innovative developers such as Kishan Gajjar of sk2 Design + Build, who is currently building six of what the company calls “slim-semis” on two 64-foot lots in Altadore.

“When we originally purchased the lots we thought we could simply build four homes, but after reviewing the city’s minimum lot width requirements, I found that we could actually create six lots – and increase the yield by 50 per cent.” 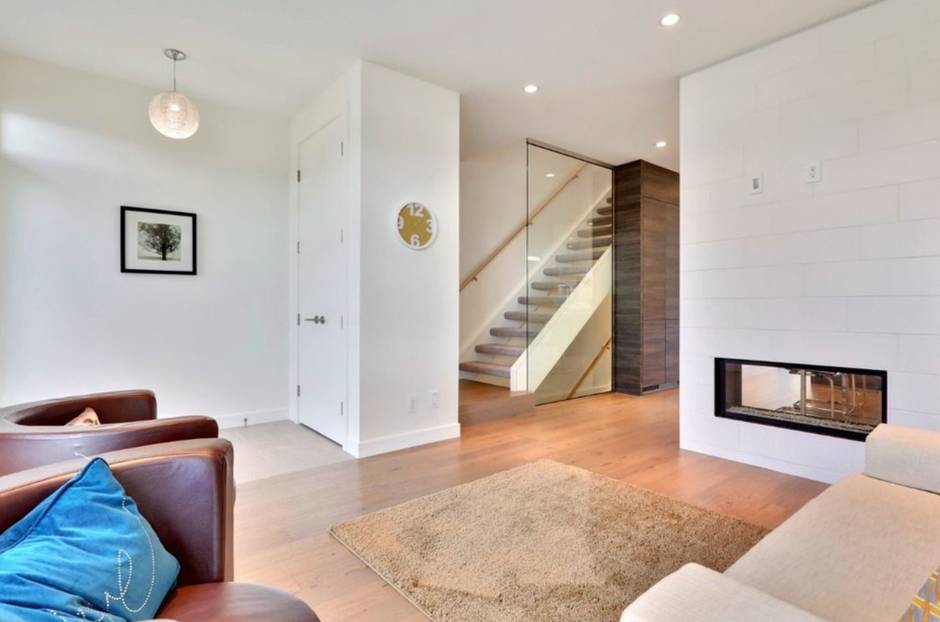 The homes are “identical” in layout to a typical three-bedroom infill semi built on a 25-foot lot, but “more efficiently designed to maximize lot width without compromising the quality of lifestyle of the users,” Mr. Gajjar says.

“Increasing yield on the land definitely spreads the cost further and helps bring land-value-per-unit average down.”

Likewise, in Marda Loop, Sarina Homes are about to launch pre-sales for their latest development; a 36-unit boutique condo development called Avenue 33, which will replace two homes and a church.

It will be Sarina Homes’s first condo development and a departure from their specialization in townhouses which they’ve been honing since 2010.

“The fourplex model has worked well for us over the years and we’ve up-zoned a lot of land from duplexes and semis,” founder Naz Virani says. “We’re interested in smart growth and growth that’s sensitive to established communities.” 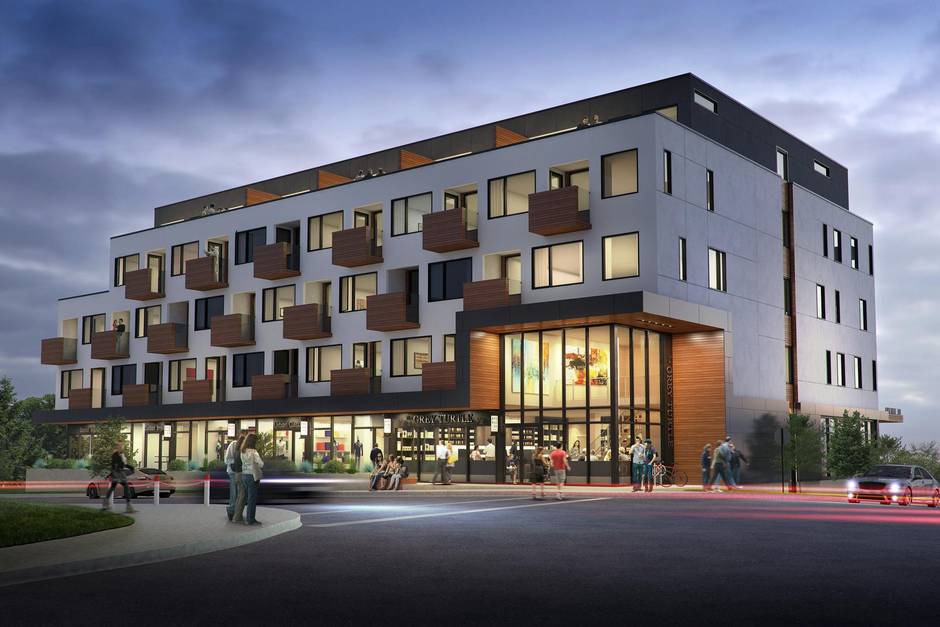 The decision to build a boutique condo building on the Marda Loop site, he says, was down to location, timing and the model proving itself in other established communities.

“We’ve seen the downtown condo market start to creep into areas like Mission and Bridgeland and work well there. The city is focused on densification of neighbourhood corridors like this one in Marda Loop and we think it’s the best product for the site.”

Mr. Virani’s condos will be priced at $300,000 to $550,000, with previous townhouse projects typically priced at $600,000 to $675,000. Condos will be fully customizable with a variety of “extras” packages on offer at a range of prices, meaning there’s something for a wide range of budgets and buyers.

Does this allow Sarina Homes to spread the risk and secure better cash-flow? “Give me a couple of months and I’ll tell you,” he says. “Confidence is shaky right now, buyers are hedging their bets, we’ll see.”

But not all developers are looking at the opportunity densification affords in an economic downturn.

Rob Aston, owner at Zen Custom Homes, is currently selling two single-family homes on a 63-foot sub-divided lot in Rutland Park, SW. The opportunity to build three homes was there but Mr. Aston instead preferred to maintain the existing density level and build larger homes on extra-wide lots.

“It might have gone over alright, but it’s not something I’m interested in,” he says. “It’s something that’s been happening a lot more in areas like Altadore but we specialize in single-family homes, duplexes at most. We’ve been doing that for 15 years and we’ll keep doing it.”

While Mr. Sargent has confidence that developers like Mr. Virani and architects like Mr. Gajjar will continue to drive a different approach to density, for Mr. Aston, density is personal.

“I lived on Stanley Drive in Stanley Park, our side of the street was zoned only for single family homes but across the street was zoned for duplexes and semis,” he says. “I got tired of it; it wasn’t what we wanted from a neighbourhood. So we moved to Willow Park, which is only zoned for single family. That’s why people live there, that’s why it’s valued. At the end of the day, I want to be able to park on my own street, outside my own house. That’s important to me.”