Most concrete that the multitudes are likely to see in the course of a Toronto day is dull, massive, hard-hat stuff. It’s found heaped high in the monumental, functional piers underneath the Gardiner Expressway and spread out to make the vast traffic decks of the 401. Of course, the concrete form of the University of Toronto’s brutalist Robarts Library is more arty than the Gardiner’s pylons – yet the architects did little to mute the tough-guy, dump-truck aesthetics of poured cement.

But is crude the only thing concrete can be? Several prominent post-war designers argued otherwise, and made concrete buildings that sing. In a conversation with me last week, Toronto architect Angela Tsementzis named Oscar Niemeyer, Carlo Scarpa and Zaha Hadid as creators who successfully used the material to embody subtle and often dramatic visual ideas. She could have added Frank Lloyd Wright, Le Corbusier and Eero Saarinen to the list – but Ms. Tsementzis’s line-up, as it stands, makes the point. 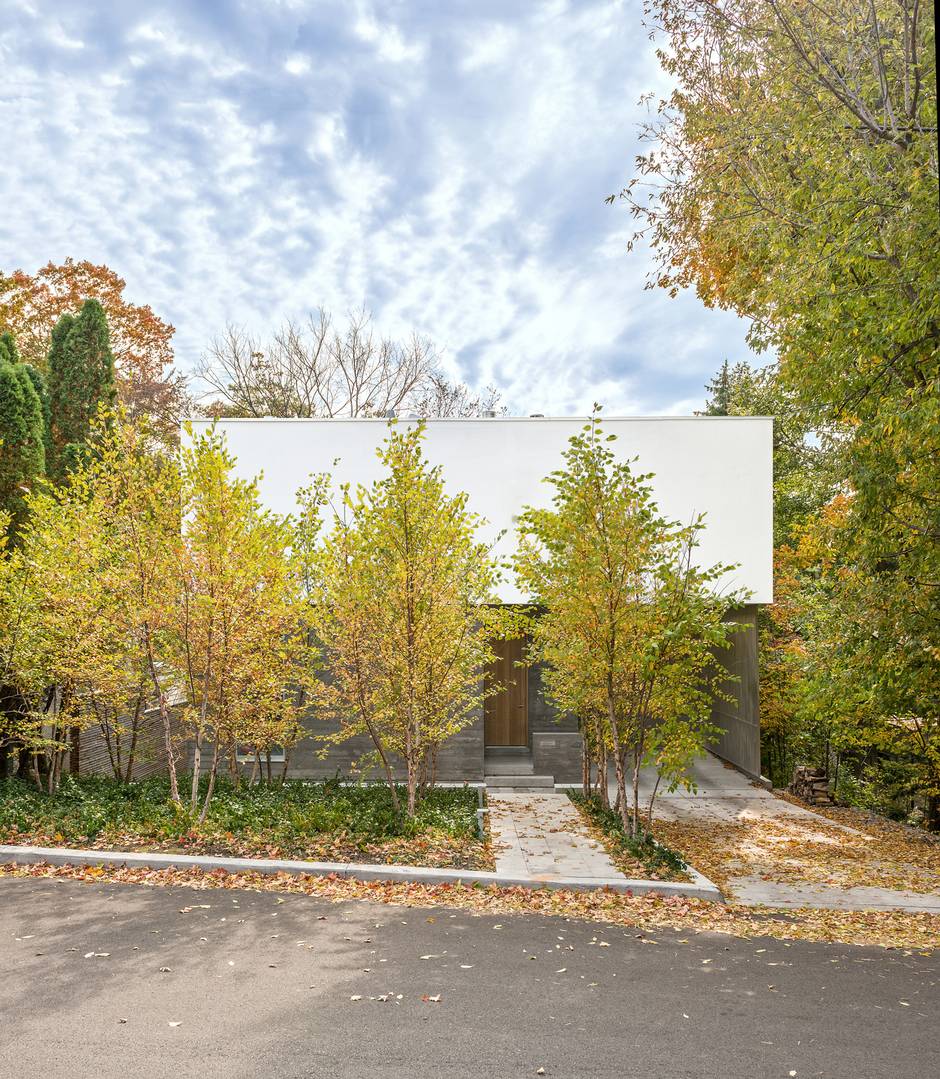 Ms. Tsementzis’s answer to this query is the 4,000-square-foot residence she crafted for graphic designers John Pylypczak and Diti Katona and the couple’s two children, and that has recently been raised – or, rather, poured out – on the edge of Mud Creek’s deep ravine in Toronto’s Moore Park neighbourhood.

That said, the notably refined concrete projects that stand out in the historical gallery are, for the most part, public structures – church, airport terminal, museum, government complex. So the question remains: Is concrete suitable and desirable if what’s wanted is a comfortable, durable private house? 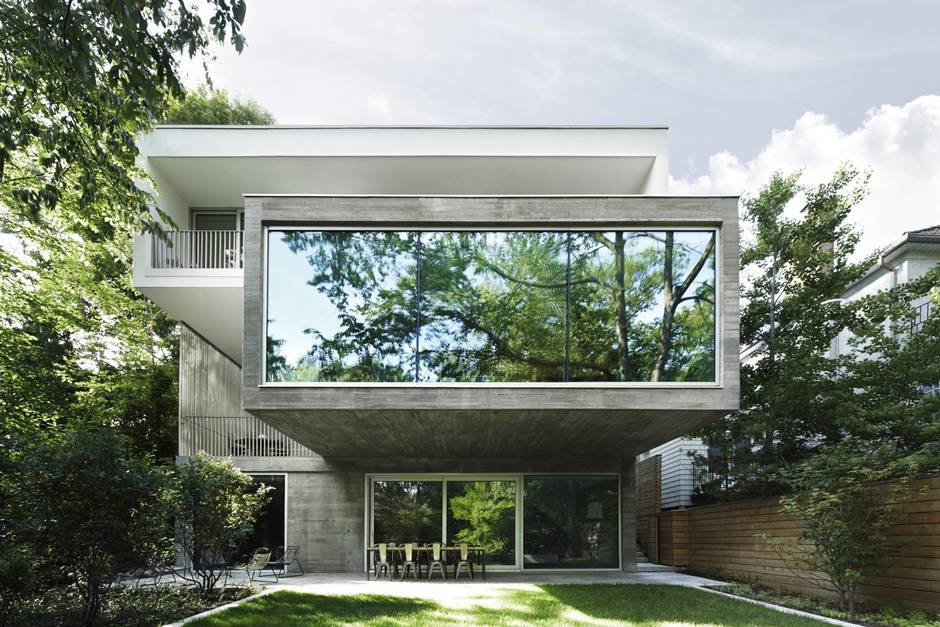 South-facing windows open the entry-level box to the ravine behind it. (Colin Faulkner)

The style of the house, the architect’s first stand-alone work, is crisply modernist and deftly efficient. Unlike some designers she admires, Ms. Tsementzis has used concrete simply to define rectilinear volumes, not to make bold curvilinear gestures. The result is a stack of three boxes, each different.

But there is much contemporary poetry in this building. 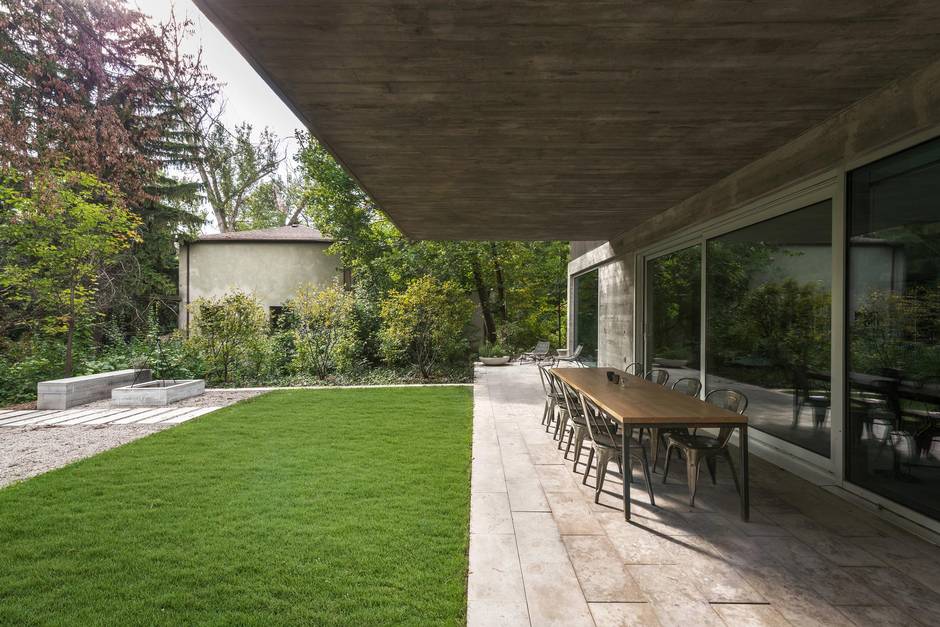 Take, for example, the interior of the entry-level volume. Its handsome, quietly expressive concrete walls were poured into plank frames that left the surfaces imprinted with memories of the wood’s grain and imperfections. In this open-plan area, where the family entertains, cooks and dines, the patterned concrete walls visually rhyme with an expanse of naturally pale beige travertine around the fireplace, with the polished concrete floor, and with millwork in white oak. (The elegant kitchen is a model b1, by the German manufacturer bulthaup.)

Wide and tall triple-glazed, south-facing windows open this all-encompassing room toward the densely treed ravine nearby, generating a serene atmosphere of seclusion and intimacy within. 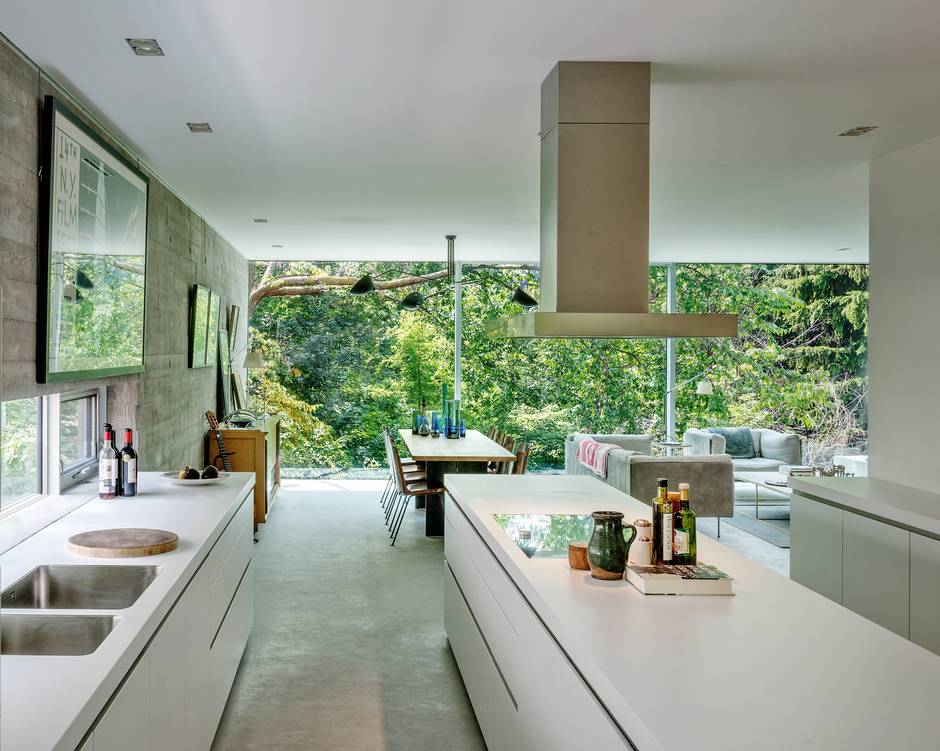 The kitchen faces on to the ravine behind the home. (Bob Gundu)

The raw and plastered concrete exterior, by way of contrast, has been energetically sculpted. The large entry-level block is emphatically cantilevered out over the back garden, eclipsing the small, glassed-in ground-floor volume in which the family relaxes. The top storey turns a shy, windowless face toward the street, and extends westward over a parking pad and a little patio. It contains two modestly scaled bedrooms for the couple’s daughters, and an ample, but not large, master suite that overlooks the ravine. Inevitably, given the jogging of the volumes, terraces open up here and there. 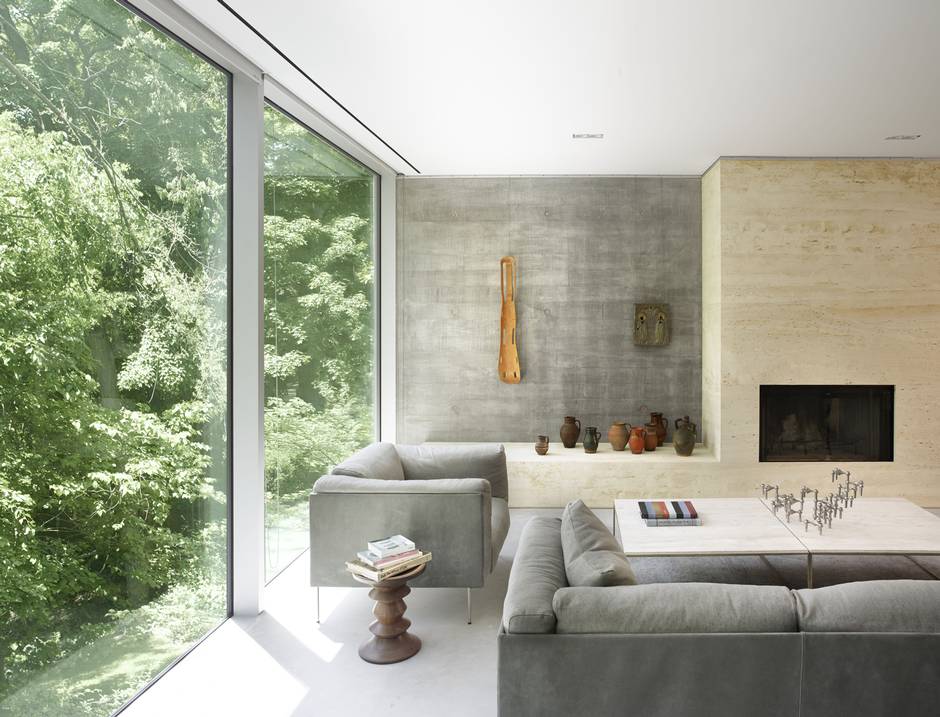 The patterned concrete walls visually rhyme with an expanse of naturally pale beige travertine around the fireplace. (Colin Faulkner)

In every architectural sense, this house succeeds. Its design is unusual, though straightforward and unfancy, modern without being soulless or too austere and lovely in ways one doesn’t usually associate with concrete.

But the architect has brought a somewhat unusual kit of interests and abilities to her design work. Ms. Tsementzis’s concerns include engineering and art in equal parts – the science of building both well and beautifully with concrete and other workaday materials. Like the pioneering European modernist designers, she is a partisan of the proletarian: the structural wall-system deployed here is ordinarily used in putting up warehouses and such. 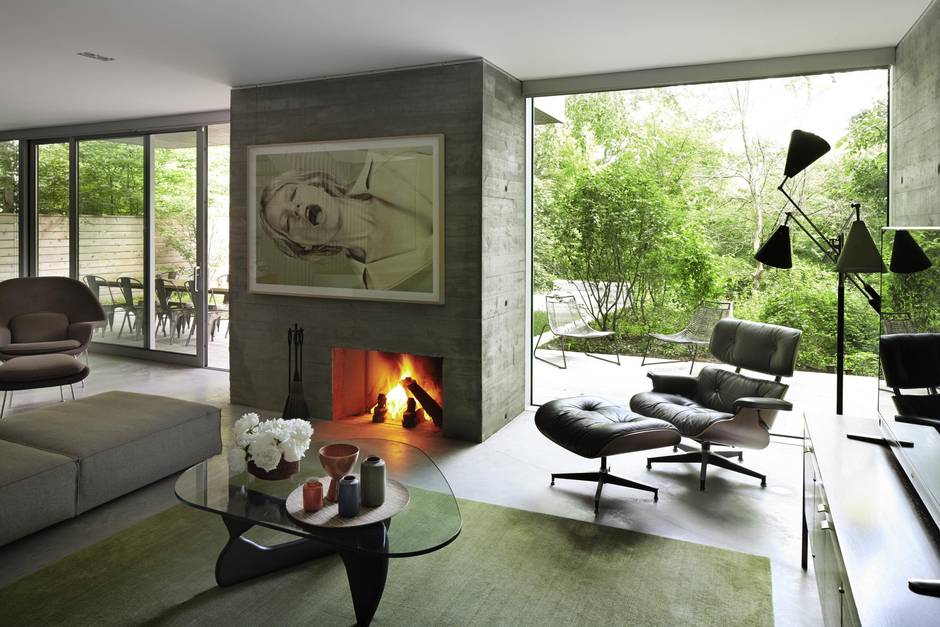 Architect Angela Tsementzis celebrates poured concrete in this home, ‘modern without being soulless or too austere.' (Colin Faulkner)

Her professional training at the University of Waterloo also featured the study of phenomenology, the field of philosophy devoted to exploring our experience of spaces, voids, the frames and rooms we move through and live within. This aspect of her education has left a trace in the thoughtful transitions and spatial arrangements of her Mud Creek ravine dwelling.

It will be interesting to see the next house this talented emerging architect comes up with. It was certainly a delight to see her first one.