Complete one church-to-condo conversion and you’ll probably never do another: That’s the shared wisdom in architecture and development circles.

And yet, armed with this knowledge, many choose to take a leap of faith and dive in anyway.

Well, in this case, Temple Baptist Church at 14 Dewhurst Blvd. wasn’t designated by the city when Grid Developments acquired it a few years ago. Therefore, Justin Aykler says, early plans didn’t include retaining the building. However, when Toronto’s Heritage Preservation Services did catch up with the stately, 1925 Georgian Classical design by Hamilton architect George Thomas Evans (1889-1969), Mr. Aykler wasn’t fazed in the slightest.

“I will say the heritage designation and the façade that we’ve worked so hard to maintain has made it a better project,” he says, bathed in the green glow of the building’s stained glass. “It’s just, design-wise, superior to initial iterations that we had gone through.”

That’s because Grid Developments, which includes three-generation-strong Aykler Developments and architect George Popper’s Urban Fabric Developments, isn’t the kind of company that would order up a wrecking ball once they’d learned of the city’s intention to designate. Rather, they embraced the challenge, got out their drafting tools and started over. 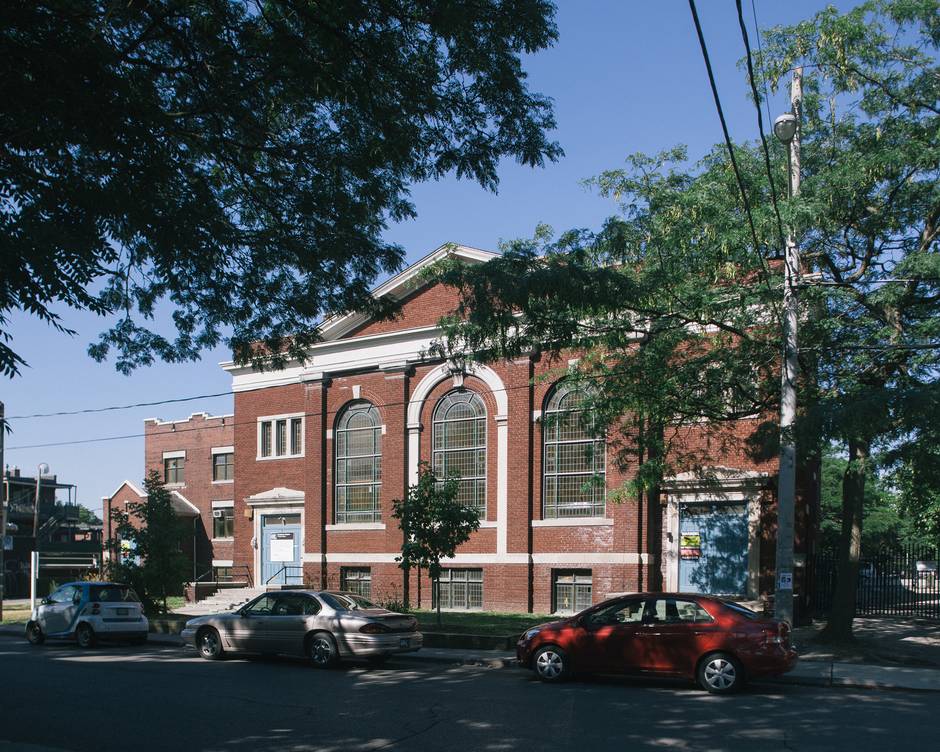 The building, near Jones and Danforth Avenues, is worth the effort. Dominated by a trio of tall, rounded stained-glass windows under a huge pediment, it could easily play stand-in for a courthouse or small town city hall on one of Toronto’s many film or television productions – were it not for that emerald green and mottled yellow stained glass. And to ensure that glass ends up lasting another century, heritage window specialist John Wilcox of Vitreous Glassworks has been brought on board. The heritage report states that Temple Baptist is “a rare example of the style in Toronto churches and especially within the Danforth neighbourhood.” The Georgian façade, the report continues, is usually found on “Post-Reformation churches in 18th-century England.”

And, to be clear, it’s not just the façade that’s being saved. Like many recent adaptive reuse projects, a significant portion that’s behind the face (about 16 feet) is being retained to preserve entry sequences and smaller heritage windows (the old Roxy/Allenby theatre just down the road at Greenwood and Danforth comes to mind). 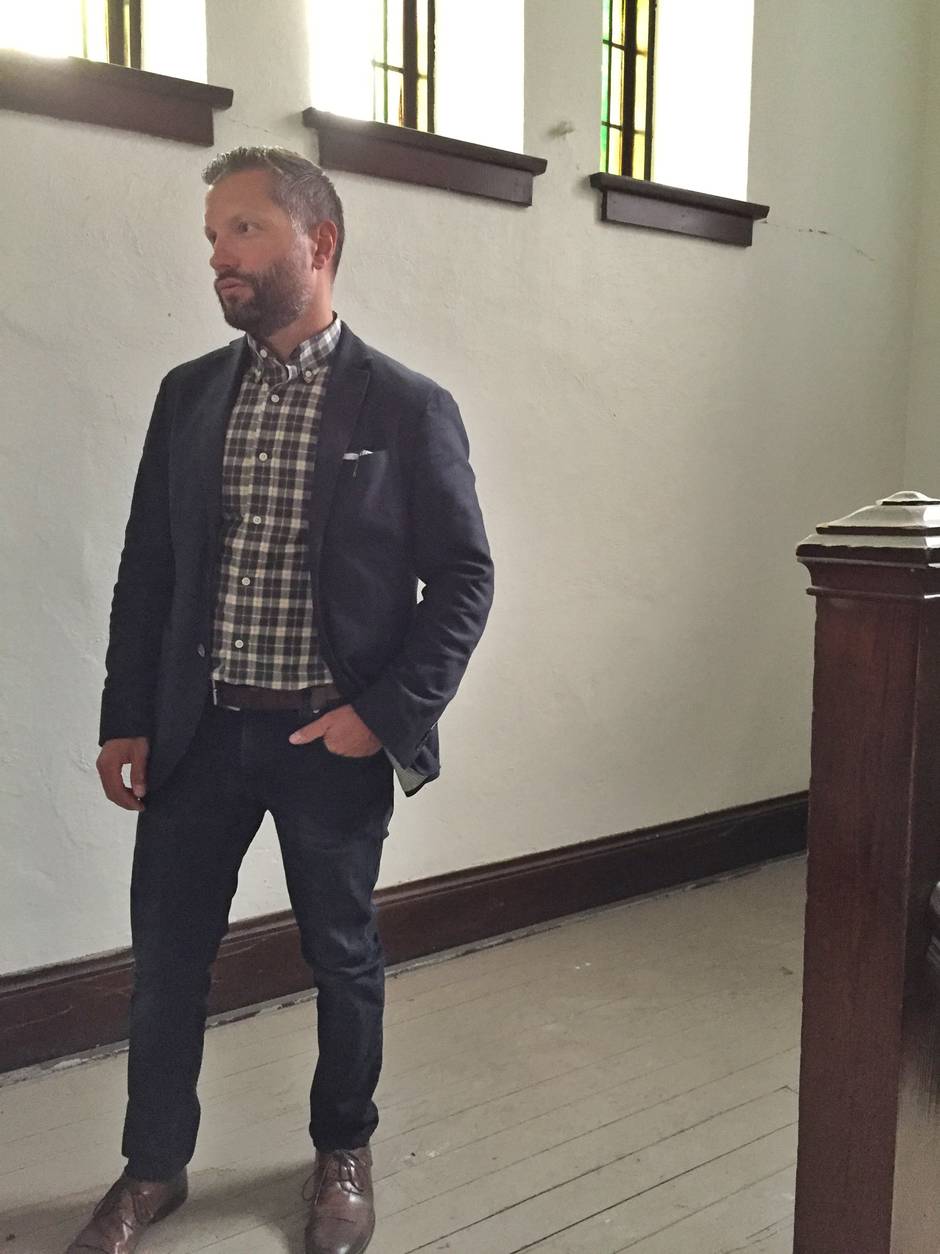 Justin Aykler inside Temple Baptist Church. (Dave LeBlanc for the Globe and Mail)

This means that two lucky second-floor purchasers will walk through the building’s original doors into their own private foyers with 17-foot ceiling heights, smaller stained glass windows and a staircase to enter the main part of their unit. They’ll also look out of the bottom portion of the large heritage windows, while third-floor unit-owners will get to Windex the rounded tops.

“The design has all been dictated by the heritage windows,” Mr. Aykler says.

For the sake of clarity, it should be noted that the impressive 1925 building is actually an addition. It’s the smaller building to the south, sporting the crenelated parapet (complete with arrow-slits) that was built first in 1913. Designed by architects Burke, Horwood & White – a prolific firm that designed the building currently housing the University of Toronto’s College Street Faculty of Architecture among other things – it was called the “Sunday School” despite being used for many purposes, including services. A massive expansion of the congregation in the early 1920s called for a much larger building, so church and school specialist Mr. Evans, who studied architecture in Philadelphia but spent his life designing buildings in his native Hamilton, was called upon to design it.

Walking through both parts of the church with Mr. Aykler last week, it’s clear the city was correct in allowing the 1913 portion to come down, since multiple renovations over the past century have resulted in little that’s original. And while peeking at other things that cannot be saved – such as the baptismal pool in the 1925 building – is indeed interesting, what’s more important is that Grid Developments will retain wall plaques, woodwork, a few pews and other decorative elements to populate the condo’s common spaces (there isn’t much to choose from, however, as Baptist churches are quite sparsely decorated). Where it sits behind the 1925 portion, the new building will be clad in black brick – this gives the heritage building visual prominence – and the portion that will stand where the 1913 building did will be dressed in red brick. 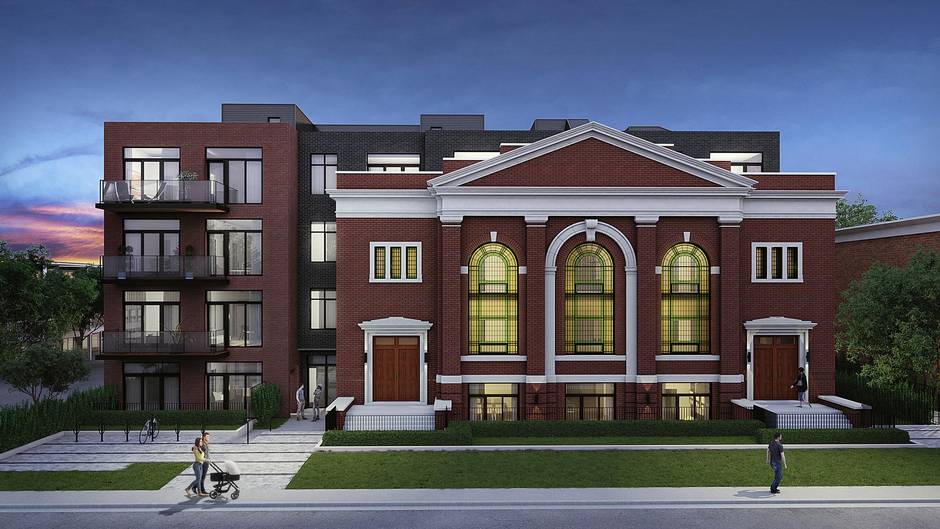 Rendering of the Sunday School Lofts, a conversion of the former Temple Baptist Church at 14 Dewhurst Blvd. off the Danforth near Jones Ave. (Grid Developments)

There are 32 units available and, unlike downtown buildings, the average suite size is approximately one thousand square feet, with a standard ceiling height of 10 feet. A few units on the third floor will have 12 1/2-foot ceiling heights. Mr. Aykler says that most of the units are going to be two-bedroom in order to attract empty nesters from Greektown and Riverdale.

“This isn’t going to be an investor-driven building,” he adds with a touch of solemnity. Just like other Grid projects, it will be the kind of building he would live in himself. “Earl Lofts I lived in, Steamplant [Lofts] a family member has a unit, Abode Lofts, [the architect’s] daughter lived in,” he offers. “I don’t know if any developer can say it’s an entirely for-profit motive if you’re vested in it, because it’s never certain that there is a profit.

On the weekend of Sept. 17 and 18, Grid Developments is having a “preview launch” of 14 Dewhurst Blvd. See sundayschoollofts.com to register.