For more than a generation of first-time homebuyers with a taste for urban living, Toronto's thousands of comfortable but cozy semis south of St. Clair represented a first stop in the city's housing market – an address from which to trade up.

But with many downtown semis now selling for more than $1-million, owners with growing space requirements are opting to expand as an affordable alternative to moving. On 14- or 21-foot lots, it's possible to go back into the yard, but some also look at adding a third storey, thus expanding the available space by as much as one-third.

At which point, they quickly discover the many technical, regulatory and social complexities associated with a party wall that's co-owned by two families.

In some cases, the negotiation – which necessarily leads to the Committee of Adjustment – is straightforward, and may even involve owners on both sides adding a storey simultaneously.

"We did it together with our neighbour," says Taras Gula, a George Brown College math instructor who lives with his wife, Irena Potoczyny-Gula, and two of their three children, in a semi in the west end. "We both ripped the tops off our homes."

"We're pretty easygoing people and that's why it worked well," says neighbour Marc Magnatta, a 51-year-old renovator who is using the extra floor for a family room, a bedroom and a laundry.

But such projects are rare; more common are fraught tales in which the design and construction impose strains on two sets of lives lived in very close proximity.

"It was a really challenging experience with our neighbour," say one Leslieville couple, who decided to add a floor to accommodate a growing family. The noise and disruption soured a friendly relationship. But they say they're determined to make amends (and asked not to have their names used). "It's a work in progress."

Generally, an un-cooperative neighbour can't stop an owner from adding a floor, but "they can make the process difficult," says Joel Anderson, an environmental designer with Sustainable.TO. "It can make for a trying place to live."

Typically, a third floor on a semi will be used for new bedrooms and a bathroom, with the additional stairs and plumbing stacked above existing facilities. Such a project can also prompt floor-plan changes on the second storey. Mr. Gula added a third-floor deck, which affords a great view of his west-end neighbourhood and downtown. "It has really made the place kind of special for us."

As with any addition to properties in close proximity, the building code prescribes extra fire protection on common walls. The City of Toronto also requires both owners to sign party-wall permits, which are submitted alongside standard building permits. If the semi is a duplex, there are further requirements for exits.

Like any additional floor, the contractors must do geotechnical and structural evaluations to ensure the existing house can bear the weight and, if not, install supports. But with third floors on semis, the weight bears on the party wall, so those structural retrofits will involve that jointly owned part of the house.

Sustainable.TO principal architect Paul Dowsett points out that most Toronto semis have party walls made of brick. But in some older homes, the common wall is constructed of wooden studs under plaster, and they may have deteriorated because of termite infestations. "You have to bring [those walls] up to code."

The real land mines, however, come during the construction process, the disruption of which is magnified by tight spaces, noise that's even closer than the sounds coming from the reno across the street, and access for contractors.

In some cases, equipment may have to come through a rear lot and across the neighbour's backyard, which means seeking an agreement. The contractors will almost certainly require access to both roofs and the design may affect shared features, such as chimney stacks that are being converted to vents for gas furnaces.

Mr. Gula says he and his neighbour Mr. Magnatta shared certain costs, did some of the work themselves and didn't dig in when it came to finding solutions to basic design issues, such as whether or not to use stucco on the exterior. "We were flexible," he says. "It wasn't that we had a very detailed vision of what we wanted."

The Leslieville owners, whose neighbours were upset about the construction noise, had to also deal with problems on the other side of the party wall, such as cracks in the plaster in a second-floor bedroom that seemed to appear because the contractors used both roofs. The owner says he and his partner spent about $3,000 to $5,000 fixing problems on the neighbour's side.

With the project mostly complete, they've learned several important lessons about what's required to maintain good relations during such projects: Make sure the contractor cleans up any debris that crosses the property line each day; pay close attention to sound containment both in terms of the construction period as well as in the design; and provide lots of advance warning about what's going to happen when.

"Try to communicate as much as possible," the owner says.

And because the Leslieville owners weren't living in the house during construction, they advise others thinking of such projects to select a contractor with strong people skills and who will be attentive to concerns from the neighbour.

For all the diplomatic nuances, Mr. Dowsett says such renos offer a smart space solution in an unaffordable market.

"Adding a third floor is a very sensible way to densify," he says.

And, as Mr. Magnatta adds, the upfront investment – about $100,000 for an additional floor and about 500 square feet of living space – more than pays for itself given current market conditions. "You'll probably double in value what you put into it." 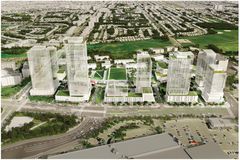 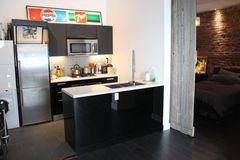 Builders flock to high-end rental development
December 8, 2016
Follow us on Twitter @globeandmail Opens in a new window
Report an error Editorial code of conduct
Due to technical reasons, we have temporarily removed commenting from our articles. We hope to have this fixed soon. Thank you for your patience. If you are looking to give feedback on our new site, please send it along to feedback@globeandmail.com. If you want to write a letter to the editor, please forward to letters@globeandmail.com.
Comments