We all carry around a mental map of the city. While these may not be as foolproof as a smartphone app, they include so much more: this sunny corner makes us happy; that stretch of sidewalk, with its long blank wall, hastens our pace; these solid old facades – as reliable as grandfather’s pocket watch – are a security blanket.

Often, we can’t even say where these places are until we happen upon them.

This building is one of those: We know we know it, but we’d be hard-pressed to come up with an intersection. It’s a long, grandfatherly presence along Richmond Street West , but who remembers that it runs from Brant to Maud streets? Who remembers that it’s so big, one can see it fronting St. Andrew’s Playground from Adelaide Street? Who even knows what it’s called?

“It’s like an invisible building,” laughs developer Gary Switzer of the Art Deco complex at 505 Richmond St. W. “First of all, this stretch of Richmond, you just drive right by, you see this big wall, and from the park it’s so bricked in, you say ‘What is this?’”

The waterworks building on Richmond from the north. (MOD developments)

In a few years, however, the name “Waterworks” may be on everyone’s lips.

Why? Well, if you’ll pardon the glossy, press-release-hyperbole, this isn’t your average condo development. For one thing, the sprawling 1932 complex – formerly City of Toronto offices for waterworks employees, with an attached 2,651 square-metre garage and machine shop – is going to be retained, mostly, in order to give the King West neighbourhood a massive and much-needed food hall. Plus, The development will also include a new YMCA, and 15 of the 299 new condominium units in the mid-rise Diamond Schmitt building will be given over to Artscape for artists and their families. 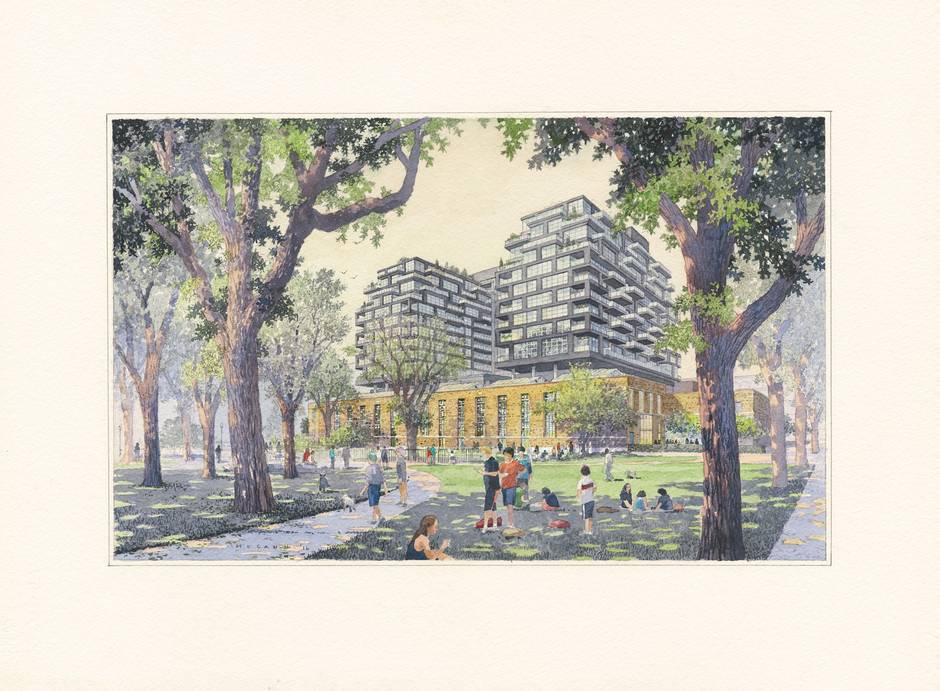 A watercolour rendering of the finished Waterworks. (MOD Developments)

What is truly noteworthy however, is that the project is being stick-handled by two companies with gold-star heritage preservation track records: Mr. Switzer’s MOD Developments, which recently saved a row of storefronts at Yonge and St. Joseph and is currently watching Massey Tower rise behind the stately old bank at 197 Yonge St., and Woodcliffe Landmark Properties, responsible for the restoration of the North Toronto railway station (Summerhill LCBO) and a host of others iconic buildings around the city.

And while Mr. Switzer admits that the “very restrained” Art Deco exterior of 505 Richmond might not be in the same league as the former Toronto Star building or the Canada Permanent Trust building, the repeating ‘speed stripes’ and the fluted brick trimming the thin, vertical windows are quite lovely and deserve to shine again. The wow factor, however, is inside the big garage: “When I saw it the first time I said, ‘Oh my God, have I lived in Toronto all my life and I never knew this existed?” 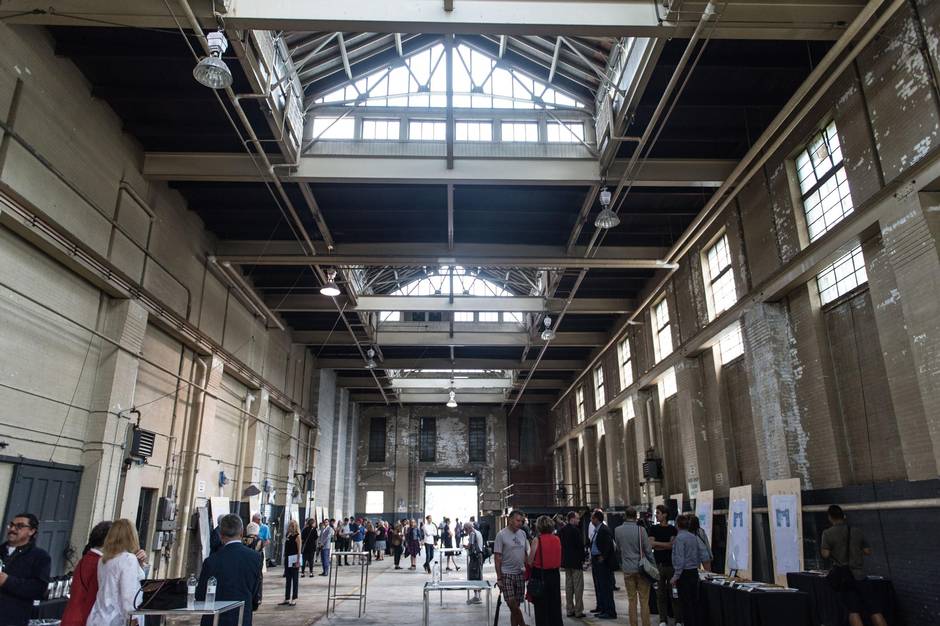 The towering maintenance building of the former City of Toronto Water Works facility at 505 Richmond St. W. will become a food hall and the heart of a new commercial and residential development. (MOD Developments)

After the long skylights have been restored and the bricked-up windows are brought back to life – some as doorways onto the park – the garage will be given back to the public as Toronto’s first food hall, and on land that once contained St. Andrew’s Market (1850-1931), a city-owned public market much like the beloved and much more successful St. Lawrence Market.

“There are, obviously, markets and there are food courts underneath office buildings, and there is Eataly coming, but there’s no version of the Rotterdam [Markthal],” says Mr. Switzer. “We looked at one in Madrid, and there’s the Chelsea Market in New York.” 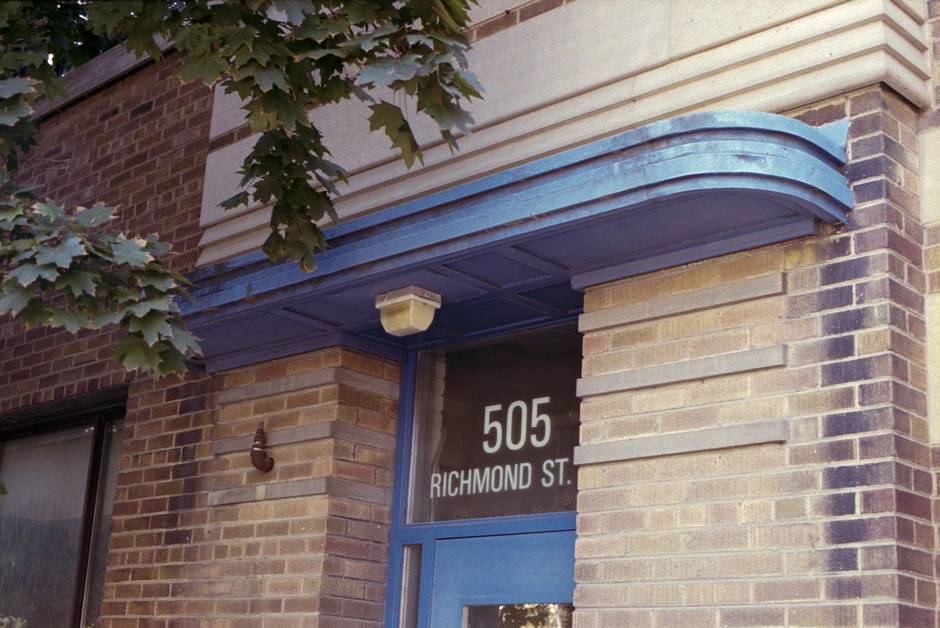 The entrance to the waterworks building. (MOD Developments)

Toronto’s Great Hall will most closely resemble Madrid’s Mercado de San Miguel, he continues: “You have a patisserie, you have a chicken place, and in the middle, they’ve got these wine bars and oyster bars and ice cream,” he explains enthusiastically, “so there really is nothing like that in Toronto – you just come in, you have a nosh, keep on going, but [there are] also sit-down restaurants.”

“We think Toronto is ready, especially this area.” 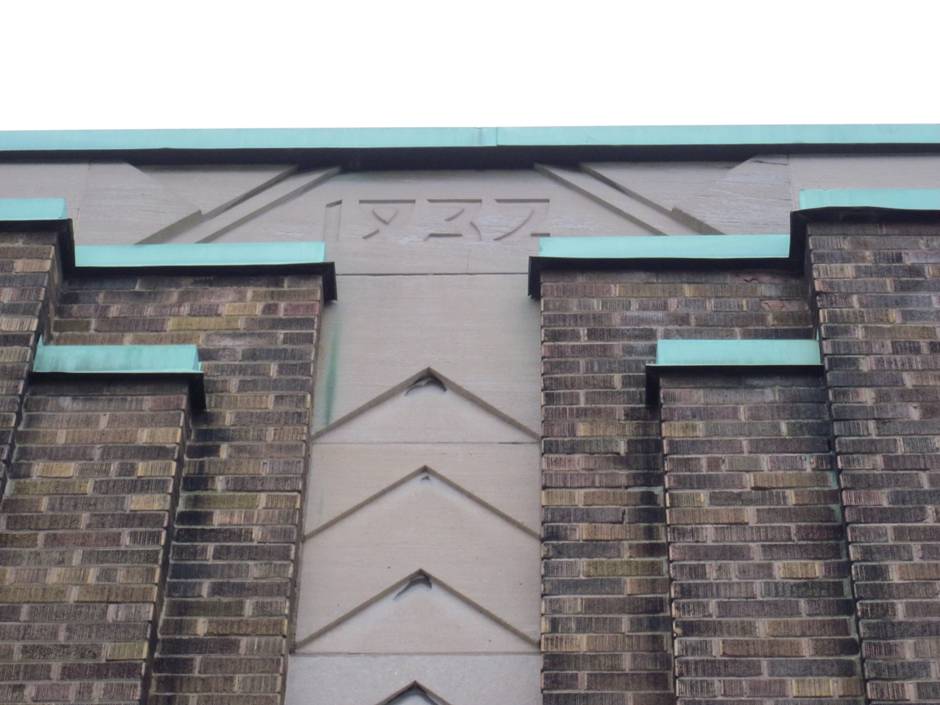 The trick, however, will be attracting more than local dog-walkers, park-strollers and condo-dwellers to the new venture, since these stretches of Richmond and Adelaide aren’t exactly high streets teeming with shoppers. New transparencies in the old building might help achieve this: a new visual link from north to south will be made possible by maintaining the interior courtyard of the existing C-shaped Deco building, and, perhaps more importantly, office workers on bustling Spadina Avenue who look west down Camden Street will be greeted with a new view through the old Waterworks building all the way to Maud Street. There’s also the possibility, Mr. Switzer says, of keeping that view vibrant well into November with “glass walls above planters and then canopies above with heaters.” 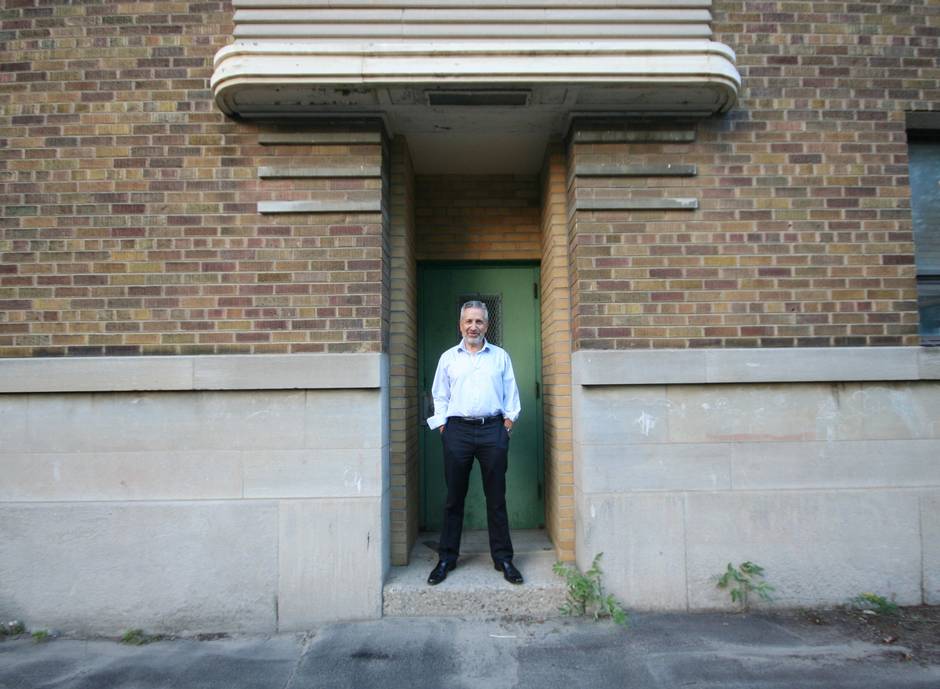 MOD Developments CEO Gary Switzer stands in front of the building located at the intersection of Richmond and Maud streets. (Dave LeBlanc for the Globe and Mail)

The neighbourhood is heating up in other ways. At the corner of Camden and Brant streets, the uber-cool Ace Hotel chain is finally adding a Toronto location. Early renderings by Shim-Sutcliffe eschew the typical glass box for a finely detailed, 13-storey, red brick building with a few groovy 1970s curves, and Brad Lamb’s The Brant Park condominium at the corner of Adelaide is starting to fill up with hungry homeowners.

Just as Artscape Wychwood Barns, the Distillery District and Evergreen Brick Works placed new pushpins into our mental maps of the city where none existed before, Waterworks seems poised to do the same. Fingers crossed.