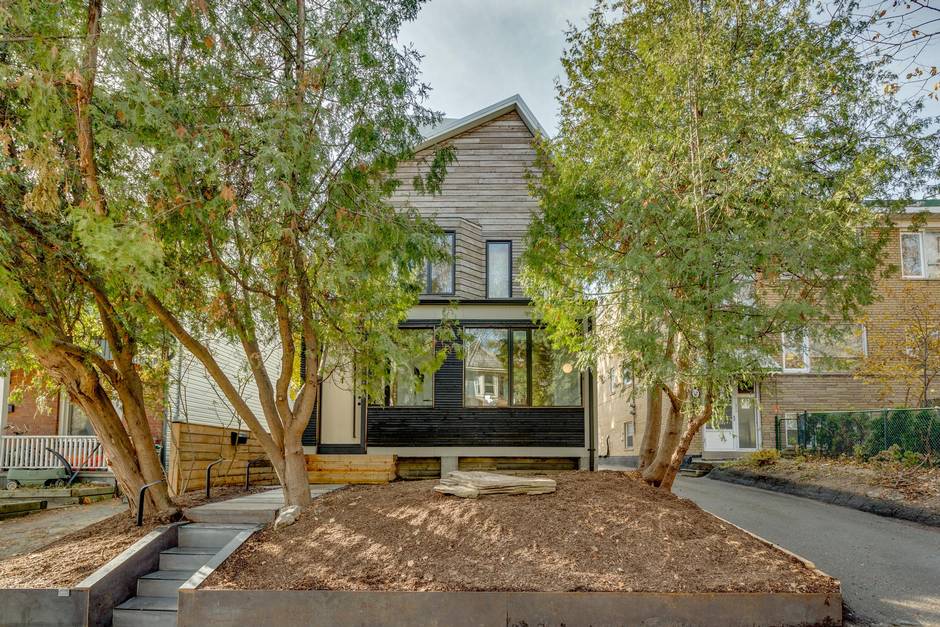 When Felix Leicher goes to the drawing board, he begins the same way: “I always start with a simple house.”

Then as he sketches, he pushes the form, extends the structure and reinvents this “simple house” into a modern design.

Mr. Leicher – who is the creative director of development company baukultur / ca – was inspired by the peaked roofs of surrounding, older houses on Herbert Avenue. But instead of centring it, he shifted the peak off to the side in his sketch, giving the house an asymmetrical shape and an unmistakable modern flair.

“The engineering team struggled quite a bit to get that shape because it’s not even,” Mr. Leicher said. “But eventually, we figured it out.” 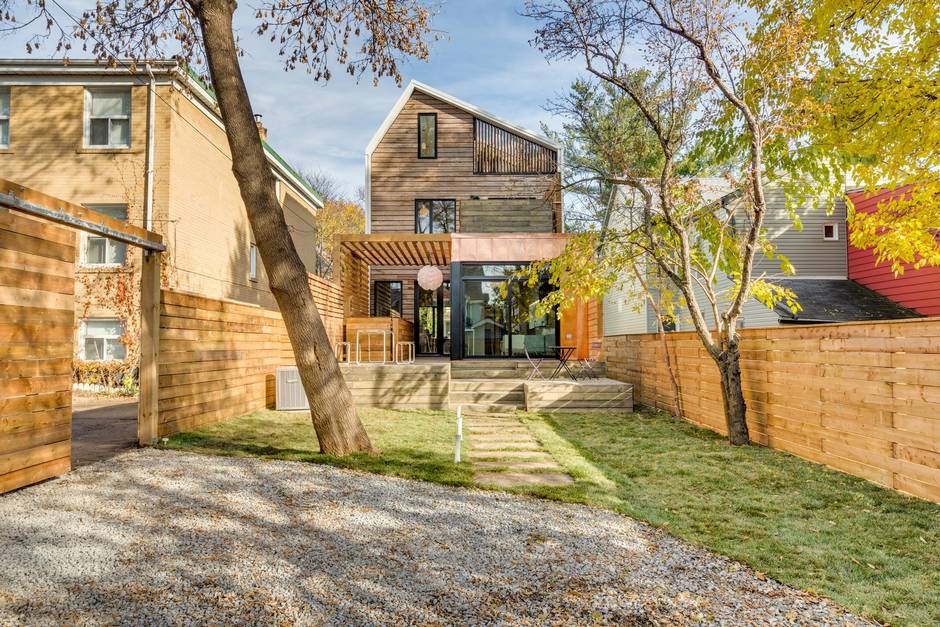 The house on Herbert Avenue, which is minutes away from Queen Street East and Toronto’s Woodbine Beach, is Mr. Leicher’s second project since moving from Germany. His first was a semi-detached dwelling on Louvain Avenue, a short streetcar ride away in Leslieville.

With that house, Mr. Leicher had wanted to build up, but decided instead on a cantilevered extension of the second floor off the back. With 46 Herbert Ave., he faced the same dilemma

“In the beginning, there were two options: to build up or build a big addition off the back,” he said. “But I decided to do the more challenging and go up.” 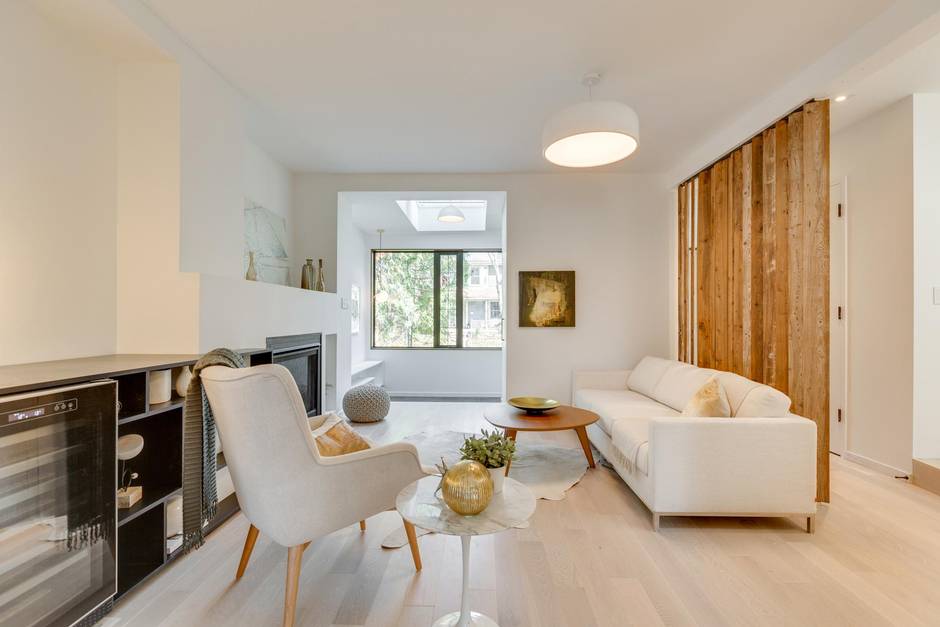 The living room at the front of the home. (Vivek Wu)

To do this, he kept the same footprint of the original house but redid the foundation and added a steel frame that helps with the asymmetrical shape and peaked roof. The goal here was to give the structure a distinctive look. But he didn’t want to use the common trope of a flat roof for a modern house. And he also didn’t want to go so extreme with the shape that it seemed out of place.

“What Felix has done is [he has] taken the vernacular of the neighbourhood and twisted it,” said Steven Fudge, his real estate agent.

The renovation took a total of 10 months and in the end, the house had five bedrooms and four and a half bathrooms.

The basement has been converted into a separate suite – which Mr. Fudge jokingly calls the “moody teen” suite – complete with a kitchen, full bath and enclosed bedroom. 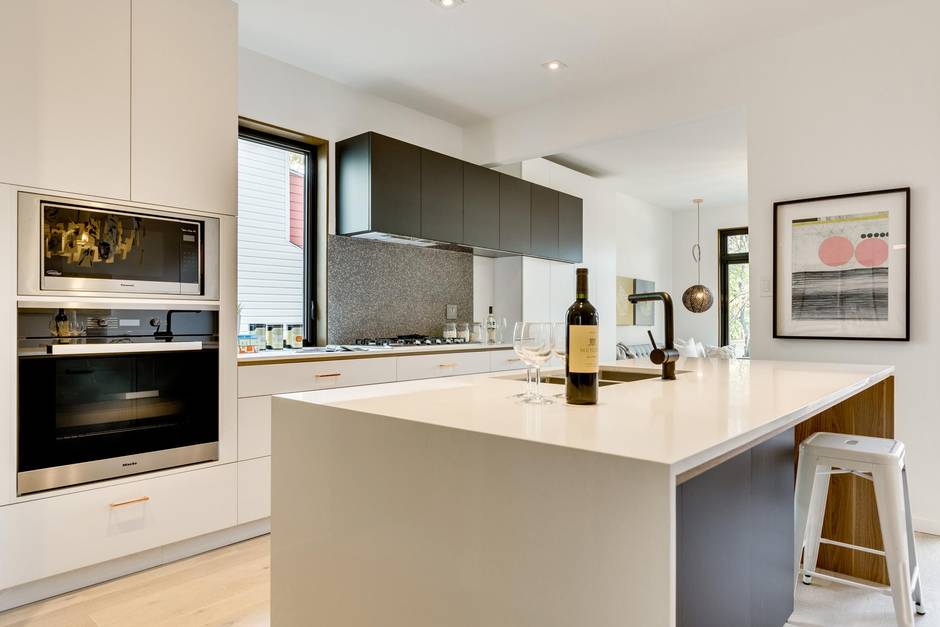 The main floor is fairly open; Mr. Leicher used half-walls and steps up to distinguish between the different areas (the foyer, living room, dining room, kitchen and family room) without disrupting flow.

The second floor has three bedrooms with two bathrooms. While the third floor is dedicated to the master suite. And it’s where you feel the shape of the home the most. The different angles create four distinct spaces in the master: the walk-in closet, the bathroom, a reading area and a sleeping space. It also features a walkout deck.

Like Louvain, there are a few design principles that pervade the house. 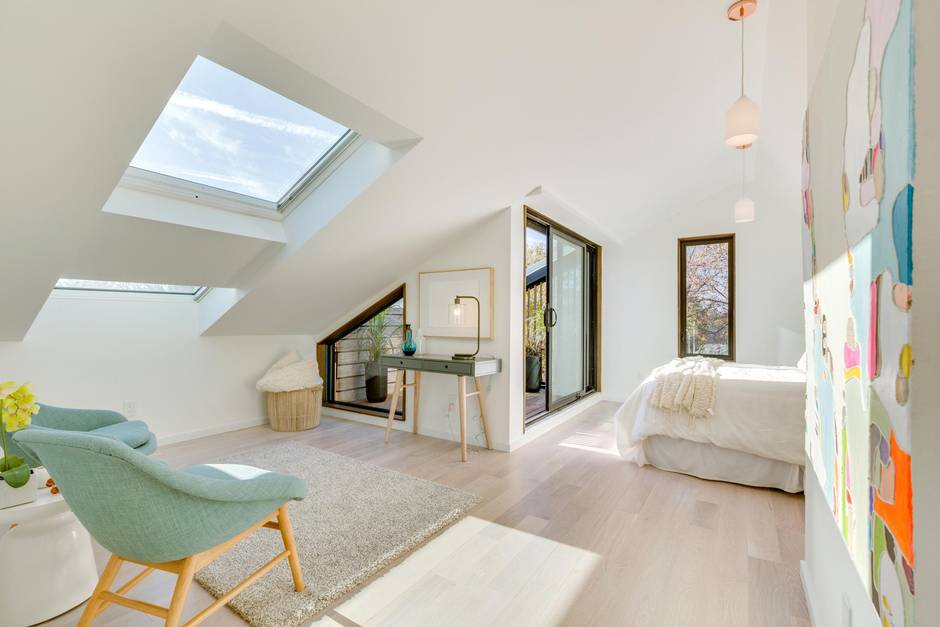 The home's shape is most felt in the third-floor master bedroom. (Vivek Wu)

The first is interplay of light and air. In fact, light was one of the main reasons Mr. Leicher bought the property.

“The exposure to the west was definitely beneficial and you have lots of soft light from the south,” he said.

To capitalize on all of the sunlight that he could, Mr. Leicher added large windows wherever he could, including along a short wall in the master suite. 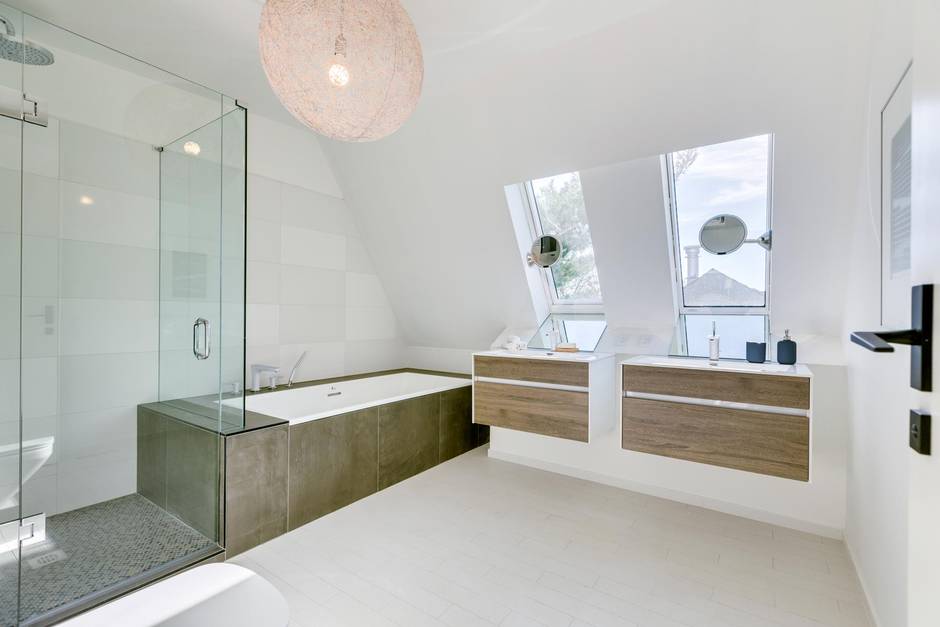 Skylights throughout the home let the sun in. (Vivek Wu)

There are also skylights throughout the house, not only to bring light in but to also let air out. Mr. Leicher calls this concept the “air chimney.”

“When there’s opportunity to open up to create cross-ventilation, then you don’t need to turn your central air on,” Mr. Fudge explained.

The other theme throughout the house is reincorporation of details and materials. For example, the front of the home is covered in slats of thermally treated wood. Mr. Leicher brought that same wood inside and used it as a divider to separate the main-floor powder room from the living room. 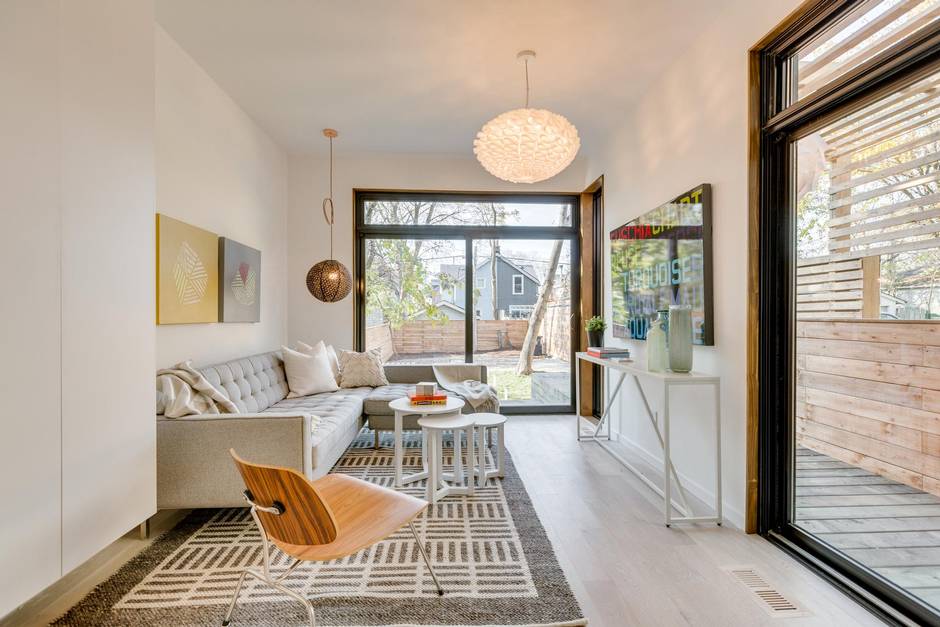 The family room is connected to a wrap-around deck by two sliding doors. (Vivek Wu)

Copper is another material that is echoed throughout the house. Subtly, it is used inside as the handles on the kitchen cabinets. Outside, however, it encases Mr. Leicher’s favourite room: the family room.

“I love the feel of the light and the way the outside and indoor play together [in this room],” he said. “Yet, you manage to have complete privacy back here.”

For Mr. Fudge, the quality of the renovation and the sustainability of the design are some of his favourite elements of 46 Herbert Ave.

“One of the things that I’ve been learning about sustainable design is that it is really about design,” he said, using Mr. Leicher’s air chimney as an example. 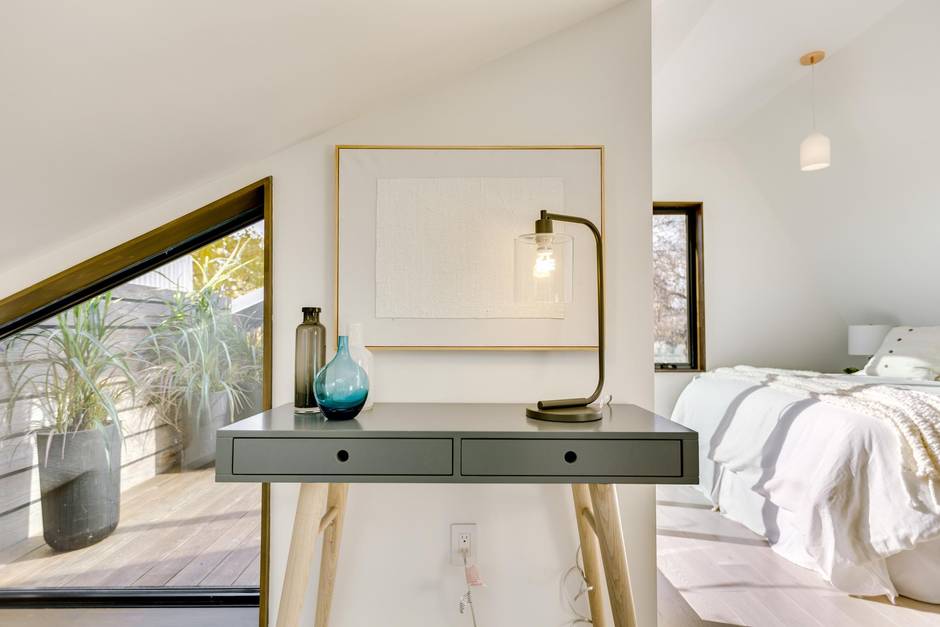 But the house is also thoroughly insulated to help with energy efficiency. The windows are filled with argon gas. And there’s a special switch at the entrance for all of the LED lights.

“That switch that turns off all of the lights,” Mr. Leicher said.

“This home is definitely showing to other builders that you can build modern and not have angry neighbours.”