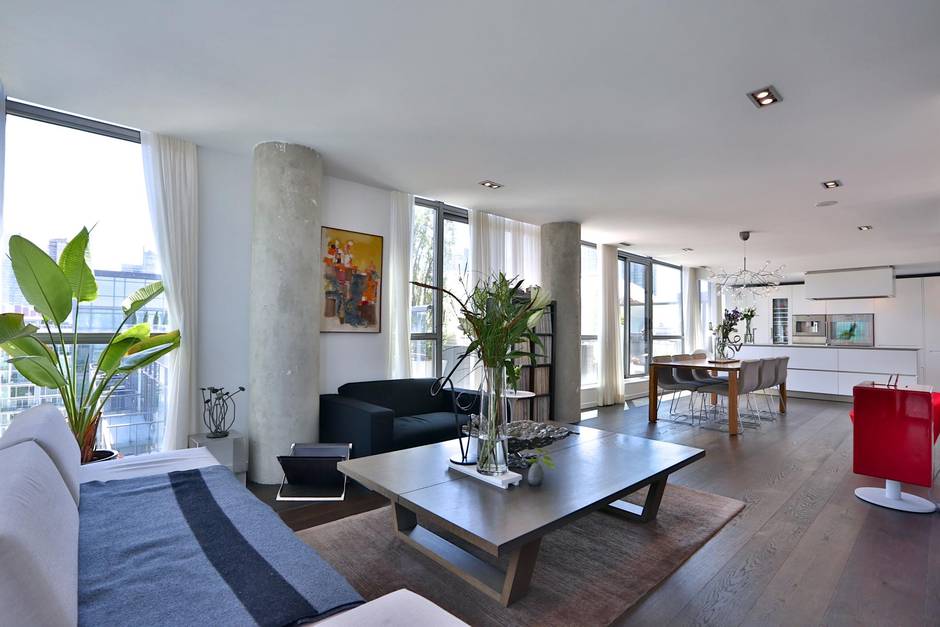 In the early 2000s, Aki and Sheila Abe were living in an industrial loft near King and Bathurst streets in Toronto when they began hanging out with a few of their neighbours. Right across the hall was Peter Freed, who was already formulating a vision that would lead to his part in the revitalization of the entire King Street West neighbourhood.

Back then, the area was mainly a mix of Victorian-era rowhouses and industrial lands that spread out north of the rail lines. An active slaughterhouse was a remnant of the area’s gritty past. The entrepreneurs who began converting the red-brick office buildings into lofts and the garment district warehouses into lounges were seen as mavericks. In 2000, chef Susur Lee returned to Toronto from Singapore and chose King Street West as the site of his marquee restaurant. Around the same time, Mr. Abe opened the Una Mas night club. 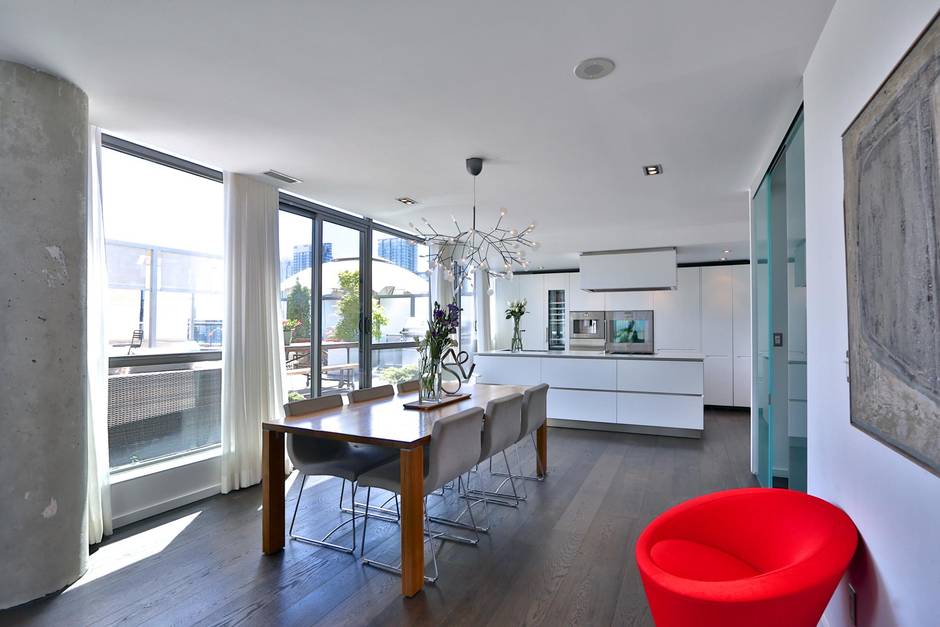 Because of their friendship with the developer, the Abes were allowed to design their own interior.

Across from the park stood the stalwart Crangle’s Collision, which had been a fixture on Bathurst Street since 1921. Mr. Abe says the neighbours often speculated about whether the Crangle family would ever sell the automotive garage with an Art Deco facade. “Everyone would say ‘he’ll never sell,’” recalls Mr. Abe.

In 2006, though, Mr. Freed revealed that the Crangles had agreed to sell and he was the buyer. He told the Abes about plans for a new project that would combine a hotel and residences across the street from their existing loft.

The drawings had just come from the printer when Mr. Freed spread out the plans and said, “Pick the one you want,” Mr. Abe recalls.

“It was pretty casual,” he says of the decision to buy.

The couple purchased one of the six penthouses, with two bedrooms and two bathrooms, facing Stewart Street. Mr. Abe didn’t realize at the time that they would be buying into the future residences attached to the Thompson Toronto. The Thompson hotels in New York and Los Angeles were already two of the couple’s favourites. 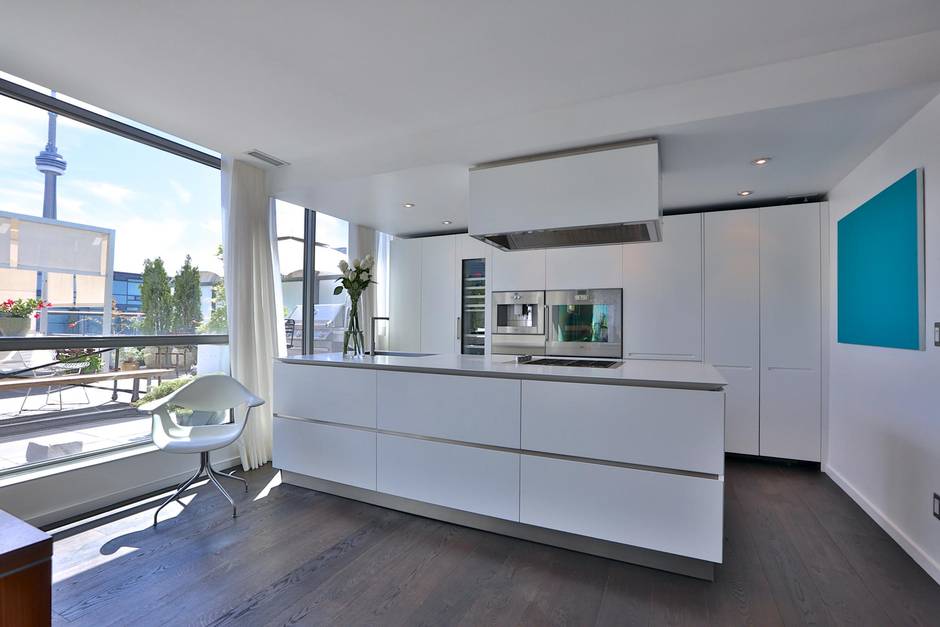 Mr. Abe redesigned the suite so that the kitchen is at one end of the living area with light flooding in from floor-to-ceiling windows

The modernist project with floor-to-ceiling glass was designed by architect Peter Clewes of architectsAlliance.

The couple watched for about four years from across the street as the floors rose.

Because of their friendship with the developer, the couple was able to acquire a raw space and design their own interior.

In the early 1990s, Mr. Abe launched Cosmos Records, which soon became a landmark for collectors of vinyl. Regulars are often surprised to find themselves browsing beside influential people in business or the arts. Actor Jude Law, it turns out, is surprisingly knowledgeable about rare jazz.

Collectors from around the world make the pilgrimage because almost everything in the store is an original pressing.

Regulars say Mr. Abe often remembers the records they have in their collection better than they do.

He also will set aside a singular find if he knows a long-time customer will cherish it. 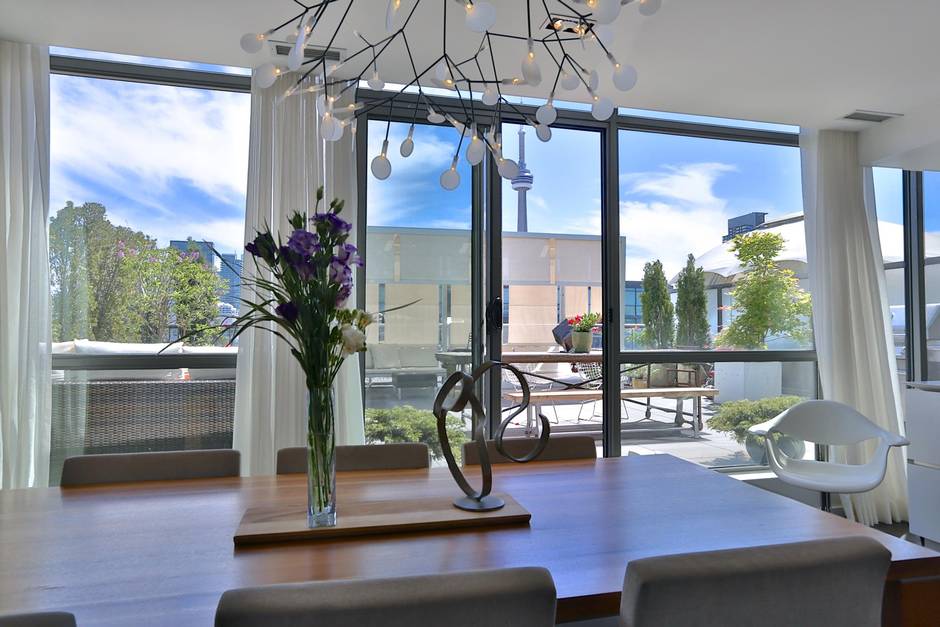 Because the condo building is attached the the Thompson Toronto, residents have access to hotel amenities.

“Some records take me two years to find and another five to find the next one,” he says. “I really care about my regulars.”

The condo’s location, a couple of blocks south of the Queen Street West location, allows Mr. Abe to walk to work while Ms. Abe also walks to her job as a registered nurse at Mount Sinai Hospital.

As a young teenager, Mr. Abe would head out with his older sister on adventures through the city’s after-hours scene. That’s where he discovered a taste for soul, jazz and rhythm and blues that would grow into an obsession.

“I’d sneak into these clubs,” he says. “This is where I heard the music.”

Mr. Abe also maintained a preference for anything that is not produced digitally, which is why he favours vinyl records and film cameras.

“Anything analogue is softer to your senses,” he says.

That aesthetic influences Mr. Abe’s choices throughout the 1,300-square-foot suite. The design is open and spare. There are wide-board wood floors in the main living area and doors that open to the 800-square-foot outdoor terrace.

Mr. Abe redesigned the two-bedroom suite so that the kitchen is at one end of the living area with light flooding in from floor-to-ceiling windows.

“We wanted the view to the terrace while we were cooking.” 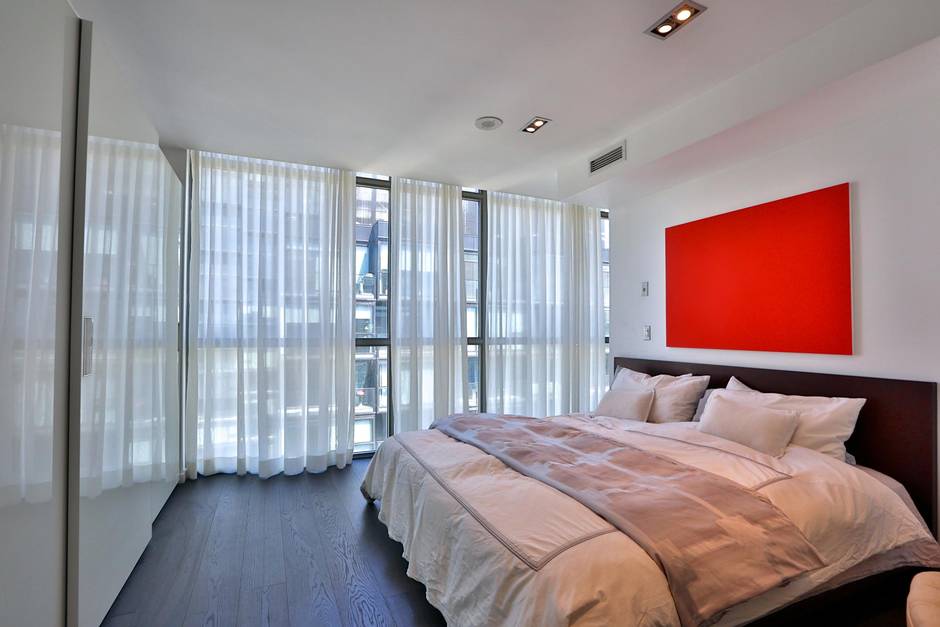 In on the project early, couple watched for about four years from across the street as the floors rose.

Mr. Abe says the couple used to spend more time at nearby clubs and restaurants but now they have become parents to two young boys. These days they prefer to gather around the kitchen and spend time with eight-year-old Ko and four-year-old Ren.

“I have three boys and I really enjoy cooking for them,” Ms. Abe says.

The open plans means the chef is always part of what’s happening in the dining and sitting areas.

Mr. Abe was born in Tokyo and the couple often visits Japan, so that country’s influence also pervades the unit.

In the master suite, Mr. Abe wanted the connection between the bedroom and the bathroom to remain quite open. He added a partial wall of frosted glass as a privacy screen.

“Everything in Tokyo looks like this,” Mr. Abe says of the minimalist design.

The metal tile in the bathroom was chosen so that it will rust over time.

The two boys share a bedroom and a second bathroom.

The boys have grown up in the condo and they know their way around the neighbourhood now, Ms. Abe says. They like to play at the playground in Victoria Square Park and they have favourite go-to spots for for ice cream. 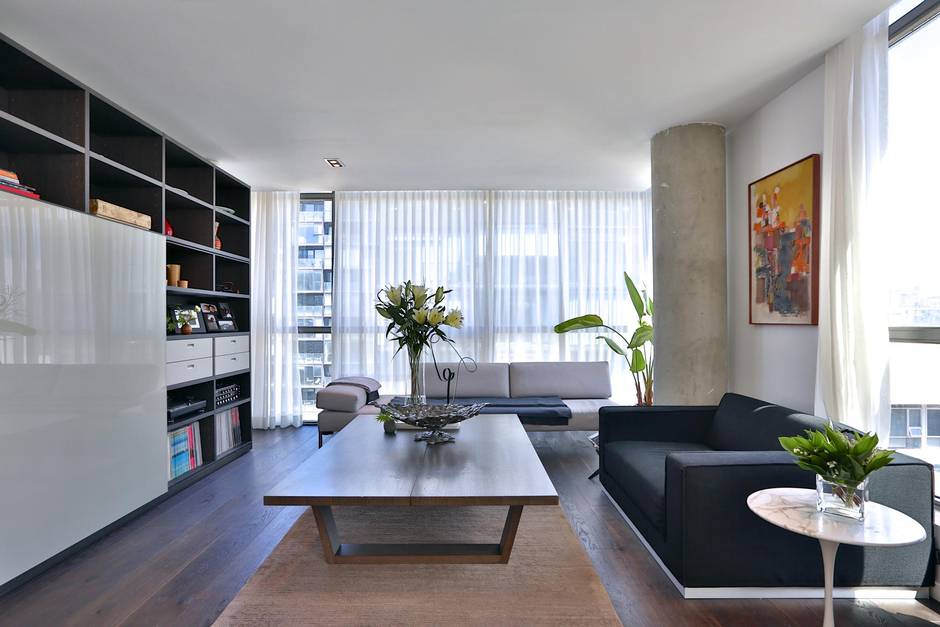 The unit’s large outdoor terrace offers great views of the city, including the CN Tower.

When Ko was born, it was still relatively rare to find people with young children in King West but the area is increasingly kid-friendly, the couple says.

“There are so many families now,” says Ms. Abe.

The condo residents have access to the hotel amenities, and the family often goes for the Sunday brunch.

“We get room service whenever we want,” Mr. Abe says.

The Thompson’s popular rooftop, with a bar, an infinity pool and skyline views, often has visiting DJs.

“Our kids go to the pool Sunday mornings,” says Mr. Abe. “We leave before the DJs come.”

The large outdoor terrace has views of the CN Tower and the cityscape.

In the summer months, Emerald Cedar, hydrangea and a Japanese Maple provide a wall of green.

There’s a cabana for lounging in the shade and a large table for al fresco dining.

In winter Mr. Abe turns the terrace into an ice-skating rink for the boys.

He starts with a frame and a plastic sheet for the base, then builds up the rink layer by layer. He’s perfected a technique that gives the ice a smooth surface that won’t easily crack. 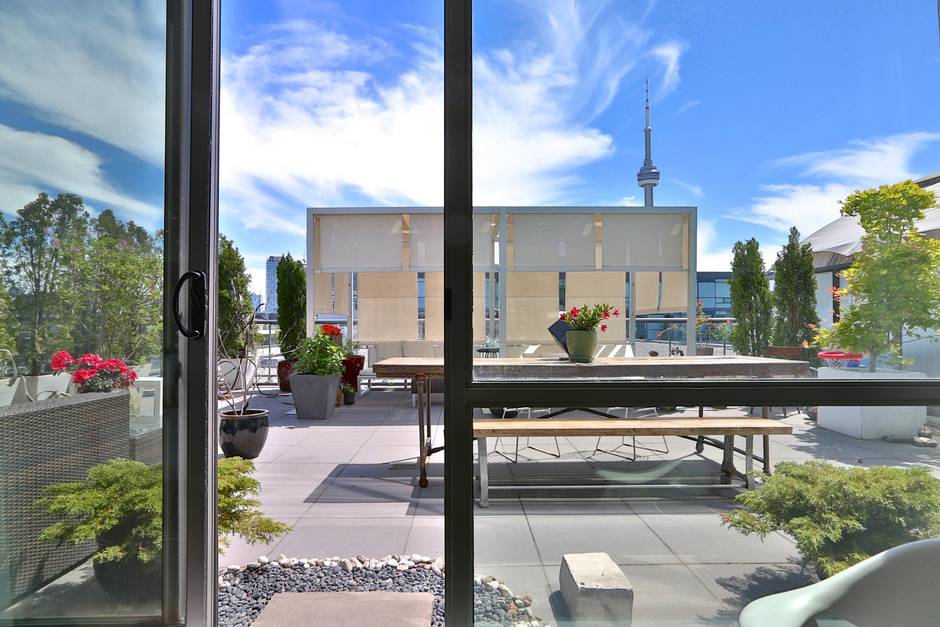 The large outdoor terrace has views of the CN Tower and the cityscape. In winter, Mr. Abe turns the terrace into an ice-skating rink for the boys.

Mr. Abe says he will miss the roof garden when he leaves. Each fall he wraps the trees in burlap to protect them from wind and freezing temperatures.

“I’ll have to remember to tell the new owner about that,” he says.

He thinks a moment, then adds that maybe he should return in the fall to show the new owner how he does it. He wants the trees to make it through the winter.