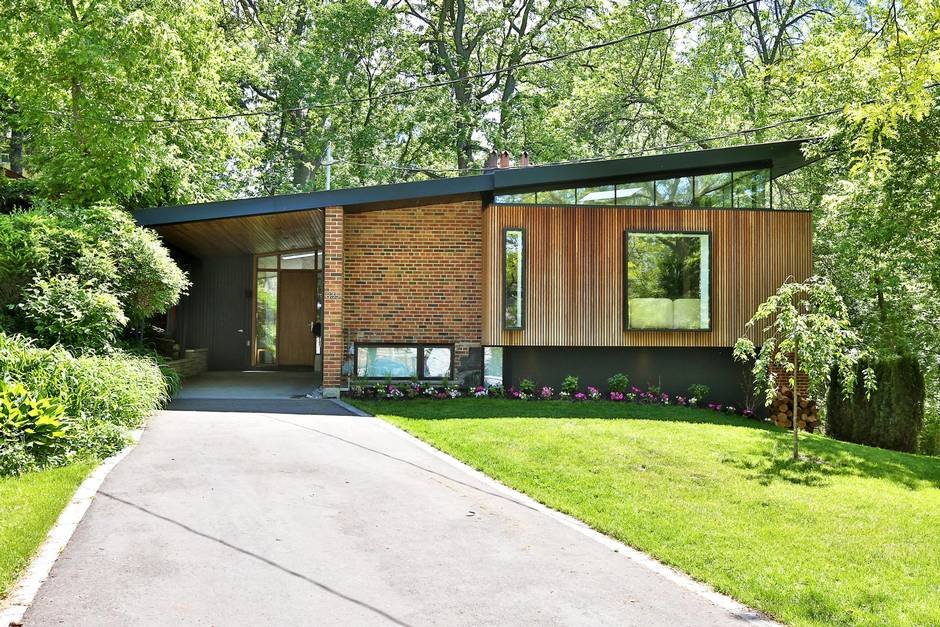 The Etobicoke house is set atop a ravine that slopes down to Mimico Creek. (The Print Market)

For decades, people driving along Royal York Road in Etobicoke have pointed out the landmark house on the edge of Mimico Creek.

“I remember this house from my childhood,” owner Anda Kubis says. “My father was a furniture designer and this was his dream home.”

Ms. Kubis, a painter, always retained that love of the modernist tradition passed on by her father. Her husband, Dean Martin, is a creative director at an advertising agency and equally passionate about mid-century design. They were already living nearby when the house came up for sale in 2007.

The three-bedroom sidesplit was modest by modern standards, and a bit timeworn, and there was talk it could be razed to make way for a row of townhouses or a monster home.

“There were two developers walking the property and talking on the phone,” says Ms. Kubis of the day she visited the house. She could hear them talking to associates about the lot size and how they could redevelop it. 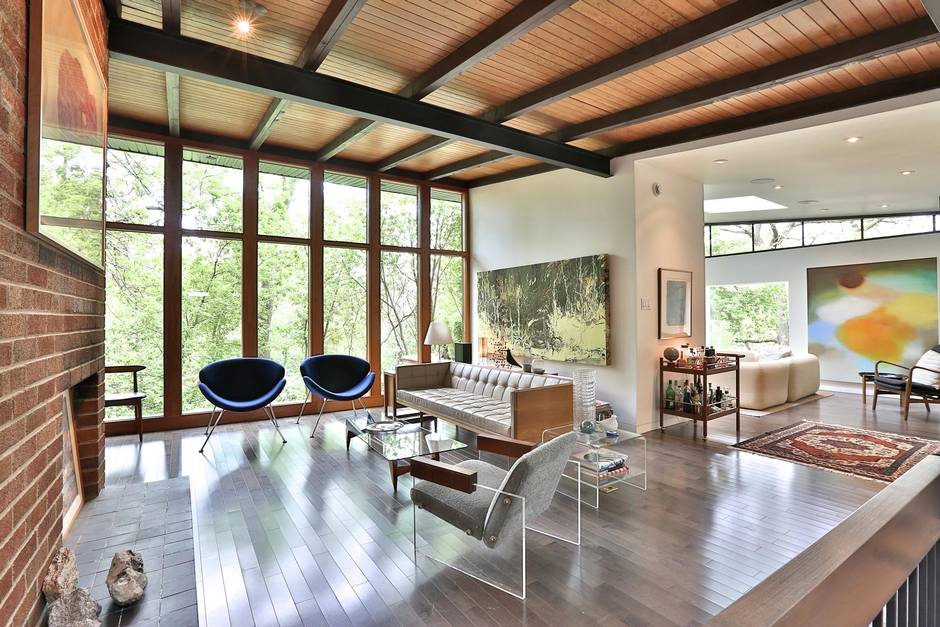 The house was designed to blend into its natural surroundings. (The Print Market)

She and Mr. Martin quickly decided that they didn’t want to pass up the opportunity to shepherd such a singular house into the current era.

The circa 1955 residence with a single pitched roof and carport was designed by the British-born architect Basil Capes. Mr. Capes had a strong love of the natural environment, and he set the house atop a ravine lot that slopes down to the creek. Conservation land on the opposite side creates a wall of greenery.

Ms. Kubis would later learn from the late architect’s family that he often worked on hotel projects. He designed quite a few residences in Etobicoke and eventually moved to British Columbia.

“You can see his love of West Coast architecture,” says Ms. Kubis, pointing to the Douglas fir, vaulted ceiling and a wall of windows overlooking the creek. “The relationship of the house to the natural environment is huge.”

Ms. Kubis and Mr. Martin bought the house from a young couple who had purchased it in 2005 with plans to renovate.

At the time, it had such vintage details as patterned linoleum, gold carpeting and a bathroom fitted with a turquoise tub. 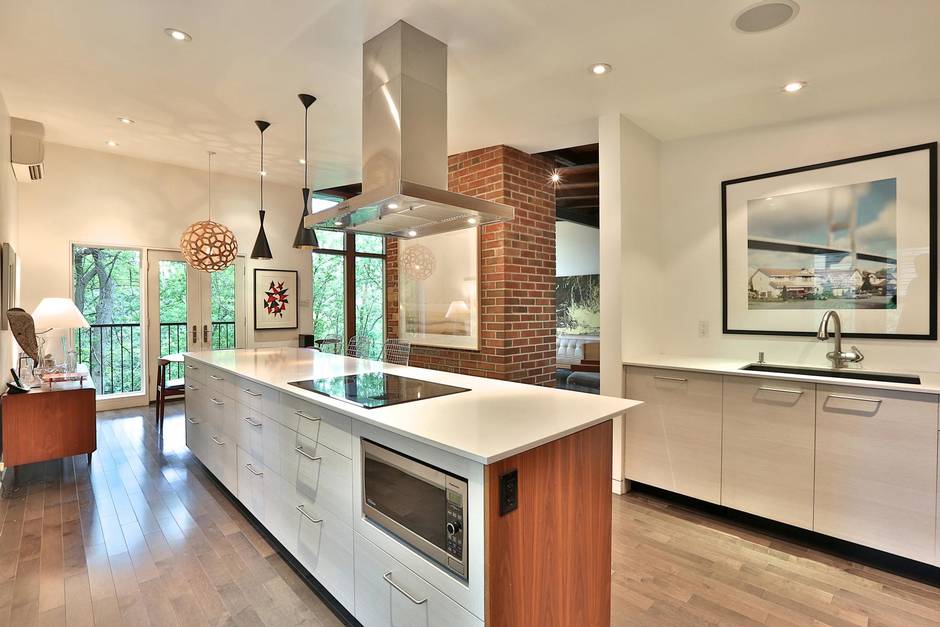 The current owners gutted the interior and upgraded all of the house’s mechanical and electrical systems. (The Print Market)

The young couple also loved the mid-century style but updating the house while conserving the architecture proved too complex. Ms. Kubis points out that the ravine system in Toronto is protected and any plans for construction have to pass through a strict approval process.

“They just realized it was way over their heads.”

Before that, Lily and Harvey Bowman lived in the house for close to 40 years.

The residence is included in the John Blumenson tome Ontario Architecture: A Guide to Styles and Building Terms 1784 to the Present. Mr. Blumenson presents the house as a fine example of the “Contempo” style.

As for the architect, he had such an abiding interest in nature and the welfare of living creatures that he often devoted his time to designing shelters for humane societies. He gave up his architectural practice in the 1980s in order to dedicate more of his energy to animal protection.

He was president of the Animal Welfare Foundation of Canada and, after his death, a memorial lecture series was established in his name at the University of Guelph.

Mr. Capes’ vision of a house that blends into its surroundings seems to have endured: On a recent evening Ms. Kubis watched a doe making her way through the creek with her fawn. 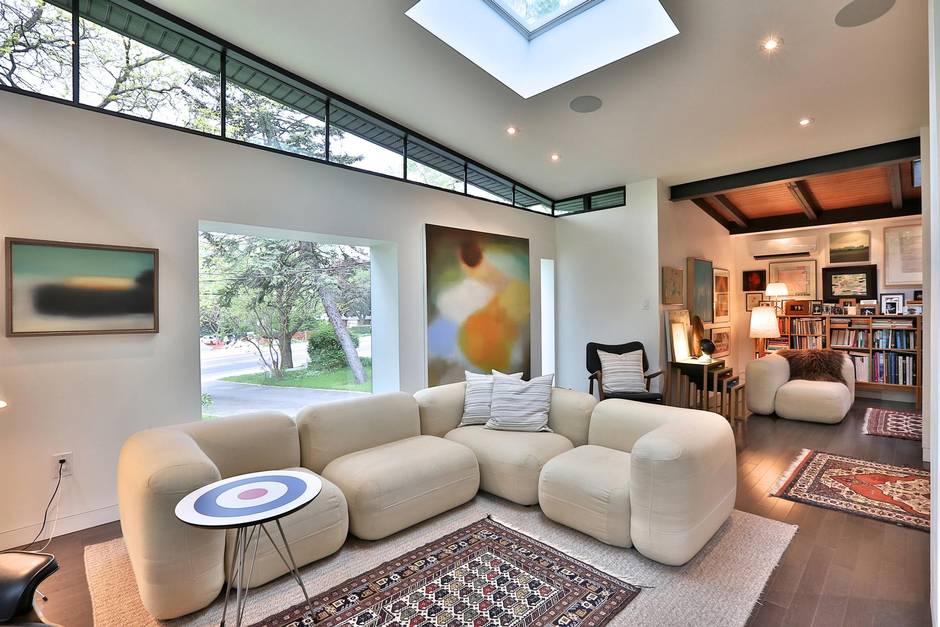 After extensive renovations, the main-floor living spaces now flow from one into the other. (The Print Market)

When Ms. Kubis and Mr. Martin moved in with their young son Benet, they knew they wanted to strip away anachronistic details such as the patio doors from a big box store, the colonial-style spindles on the stairs, and a western-themed bar on the lower level.

Behind those non-period fixes, the fundamentals remained, including the slanted cedar ceiling in the living room, a massive brick fireplace and exposed Douglas fir beams.

“A lot of the original character is still here,” Mr. Martin says.

The couple knew that restoring the building to its original condition would be expensive and wouldn’t provide the flow that they wanted.

They brought in Janna Levitt of LGA Architectural Partners to redesign the interior within the existing footprint. A detached garage added in the 1970s was located behind the carport. They decided to join the former garage to the house and create a spacious master suite.

First, the interior of the house was gutted to the exterior walls and all of the mechanical and electrical systems were upgraded. 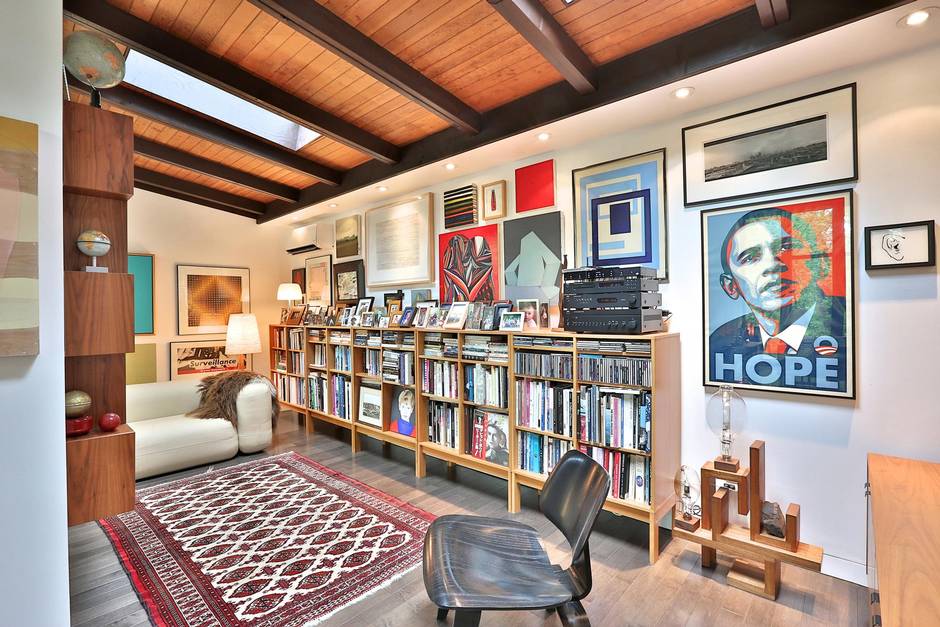 After adding an extension to the house, the couple had 2,700 feet of living space and more wall space on which to hang their art. (The Print Market)

The former galley kitchen became a study. Now the main-floor living spaces flow from one into the other.

“It’s open concept but there are all of these defined spaces,” Mr. Martin says.

Now residents and visitors enter through the carport. Once they step inside, one set of stairs leads to the upper level and another leads to the lower level.

Because of the slope of the lot, a family room on the lower level has a full wall of windows.

A bedroom on that level was originally planned as the master suite. But when the couple decided to build on the foundation of the former garage, Benet took over the downstairs bedroom with a vast window looking into the ravine and ensuite bathroom.

“He has quite a distance from his parents,” Ms. Kubis says.

The couple took out the vintage bar that looked like a Western saloon, with swiveling bar stools and replaced it with a bathroom. A room that can be used as another bedroom serves as Ms. Kubis’ office.

A few years after that phase of the renovation was finished, the family decided they wanted more room to display their collection of art and furniture. At the same time, Ms. Kubis, an associate dean in the faculty of art at OCAD University, needed a studio. 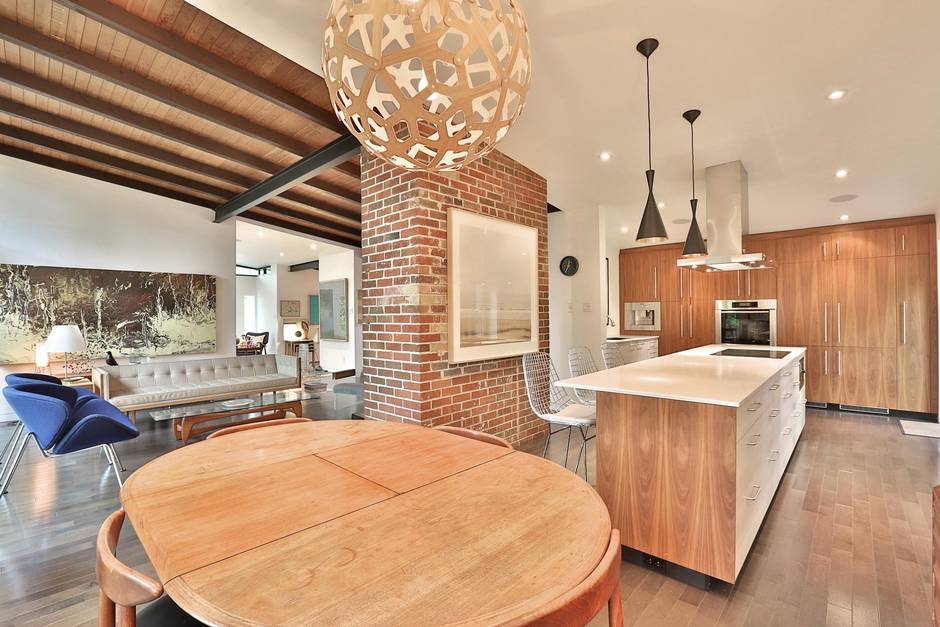 Owner Anda Kubis, who inherited a love of modernist design from her father, has admired the house since she was a child. (The Print Market)

They came up with a plan for extending the front of the house, but when they showed it to Brian Kikstra, who was part of the design team from the previous renovation, he had a vision of his own.

“We had ideas but he refined it beautifully,” Ms. Kubis says.

The solution was an extension to the main living area, with an art studio below.

Instead of brick and Douglas fir, they chose steel and mullionless glazing.

“We wanted to introduce forms and materials that resonated with the original mid-century structure but that would also clearly differentiate the old from the new,” said Mr. Kikstra.

The couple now has 2,700 feet of living space and more wall space on which to hang their art. The new windows have brought more light and airiness to the interior. 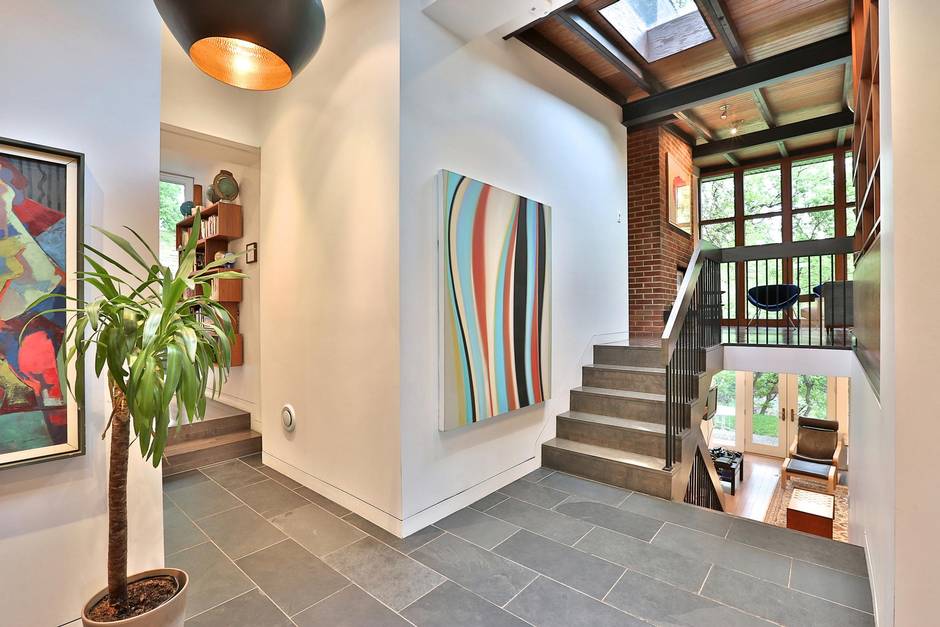 Ms. Kubis and her husband bought the house from a young couple who had purchased it in 2005 with plans to renovate. (The Print Market)

“We did do a lot, but we preserved it in many respects,” says Mr. Martin of the original architecture. “The DNA is not changed. What people like about it is, there is an authenticity to it. There’s a patina to the place and a history that’s inherent.”

A new owner will soon take over the stewardship: The house sold within one week of arriving on the market.

The front of the house, facing Royal York Road, was intentionally understated. All agreed they wanted to maintain that subtlety created by Mr. Capes, but Mr. Kikstra suggested adding something new that would be intriguing and inviting to visitors. He was looking for “a simple gesture that would set the tone for the rest of the house by offering glimpses of the light, colour and volumes within.” 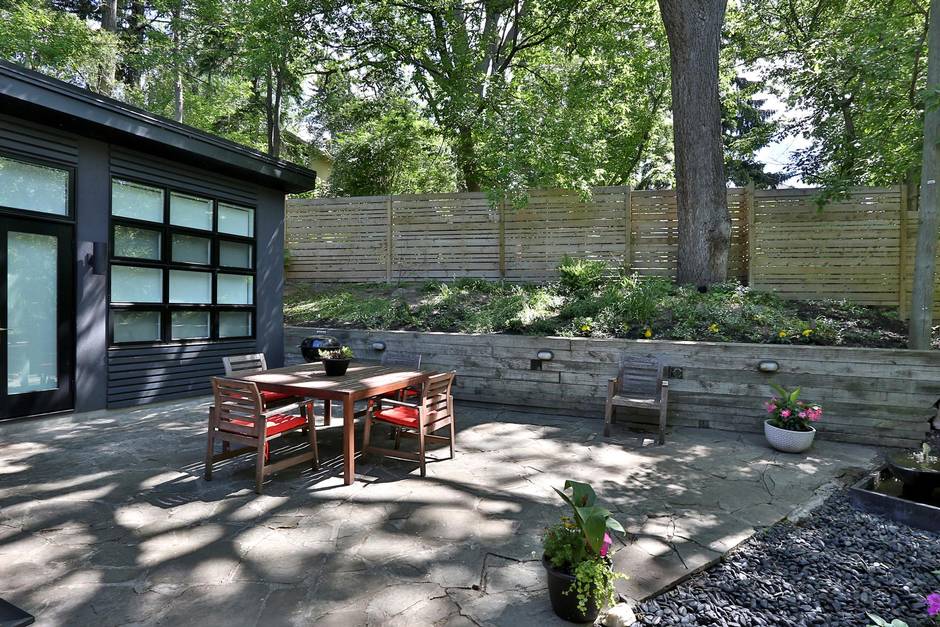 The house sold within one week of arriving on the market. (The Print Market)

Instead of load-bearing brick walls, they created the appearance of a glass-and-wood box cantilevered above the sloping landscape. It’s topped by a light steel structure with clerestory windows.

Mr. Kikstra points out that the steel almost disappears, giving the box and the roof a sense of levity.

Sidney, the family’s part-Australian Shepherd dog, now likes to nestle into the glass box and survey the street from her vantage point over the front garden.

“She thinks it was was made for her,” Ms. Kubis says.