On Tranby Avenue, history is for the birds. Stained-glass birds nest in almost every transom on this narrow east Annex street, the work of the artisan Robert McCausland when its houses were built around 1890. Most of these birds have been preserved and refurbished – including the one on No. 66, which was cleaned up by Andrew McCausland, great-grandson of the original artisan.

And behind the façade is one of the best modernist renovations I have ever seen in Toronto. It suggests a new and welcome approach to the city’s Victorian houses: to preserve the craftsmanship of the 19th century, and match it with the design and craft of the 21st. 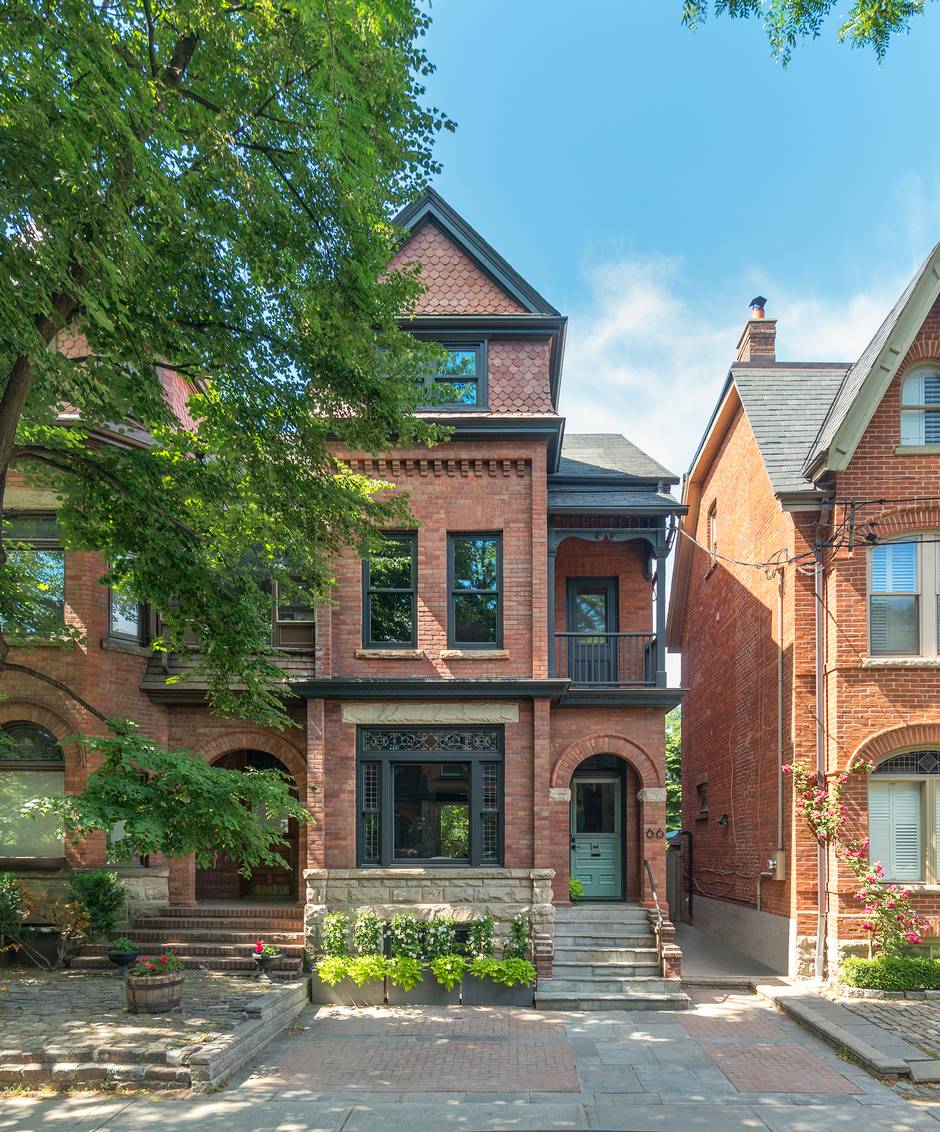 “Approaching a project like this, you have to be conscious of what you have,” explains Betsy Williamson, the architect who oversaw the project with the firm WilliamsonWilliamson. “And in this case we had a grand house with this tremendous detail – it only made sense to take care of it.”

Detail and craftsmanship: Not just the stained glass, but fine plasterwork on the interior walls; the ornamented hinges, doorknobs and grilles that might have been here since the house was built in 1892. All these were retained, cleaned up and reinstalled, even as the 3,300-square-foot house got a set of new mechanical systems and a back half that’s almost entirely new. 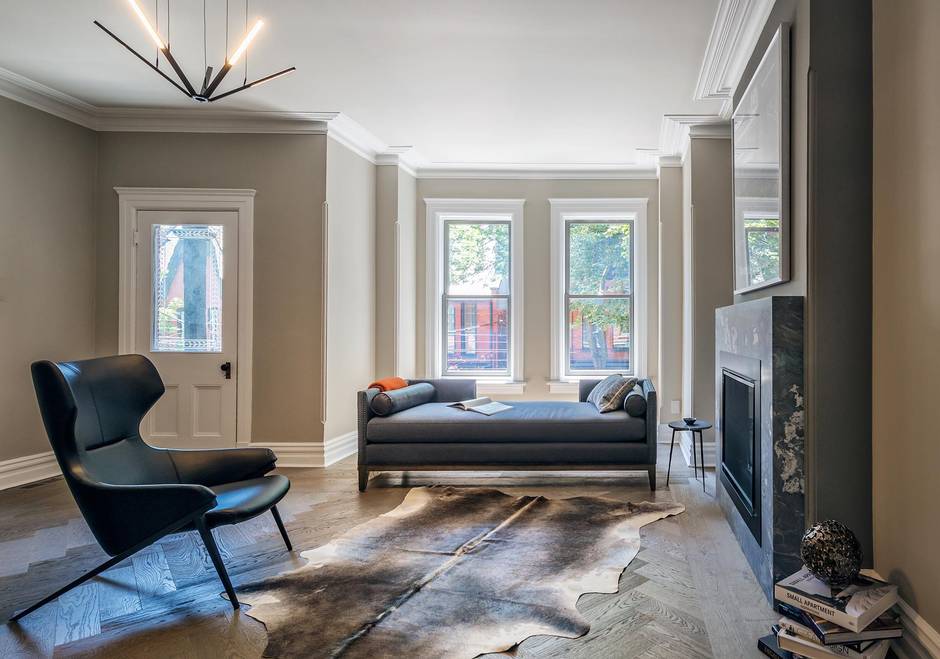 The living room has a brushed-oak floor in a herringbone pattern. (Bob Gundu)

The balance is calibrated very subtly. The Annex Style front façade and living room look like they are in their original state, although the room has a new brushed-oak floor in a herringbone pattern. Here, as elsewhere, the mouldings and plaster walls are intact, including fluted ornament at the corners of the walls. Walk into the house’s central corridor, and under the tall ceilings sits a clean box of grey-washed white oak – it looks like furniture, but contains a new closet and a powder room. The new millwork stops just short of the ceiling, leaving the mouldings intact. “There is a small gap that lets the old and the new live together,” Ms. Williamson explains. “We wanted to make it very clear when we had done a new piece and when we were restoring.” 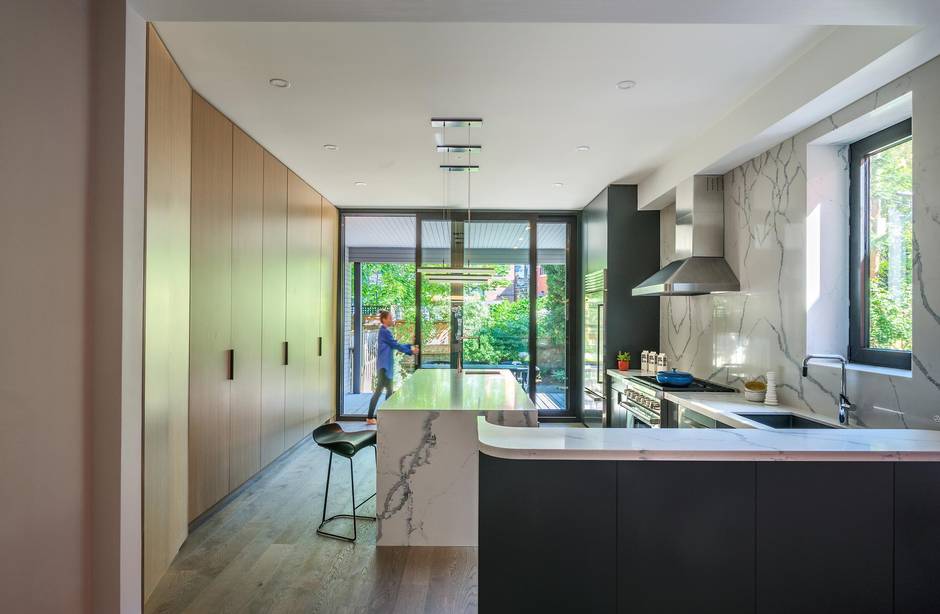 You can see this in the kitchen. Where the original house’s baseboards and mouldings stop, a new piece of millwork, reaching from floor to ceiling, establishes a new language on the wall that is crisp and different. The island and counters are wrapped in Quartex, a quartz composite with a pattern that resembles marble. And on the wall is a special set of electrical outlets, designed by Vancouver’s Bocci: instead of a plate on the wall, it appears as two circles cut into the backsplash.

“That took a lot of effort, but it was worth it,” says Darcy Ward, who with his wife Alexis Walker were responsible for the renovation. What’s remarkable is that they didn’t do all this for themselves: Ward and Walker, with their company 3Gen, are developers. In other words, this was a flip. A few weeks ago, 3Gen sold the house to a new resident for $3.599-million. 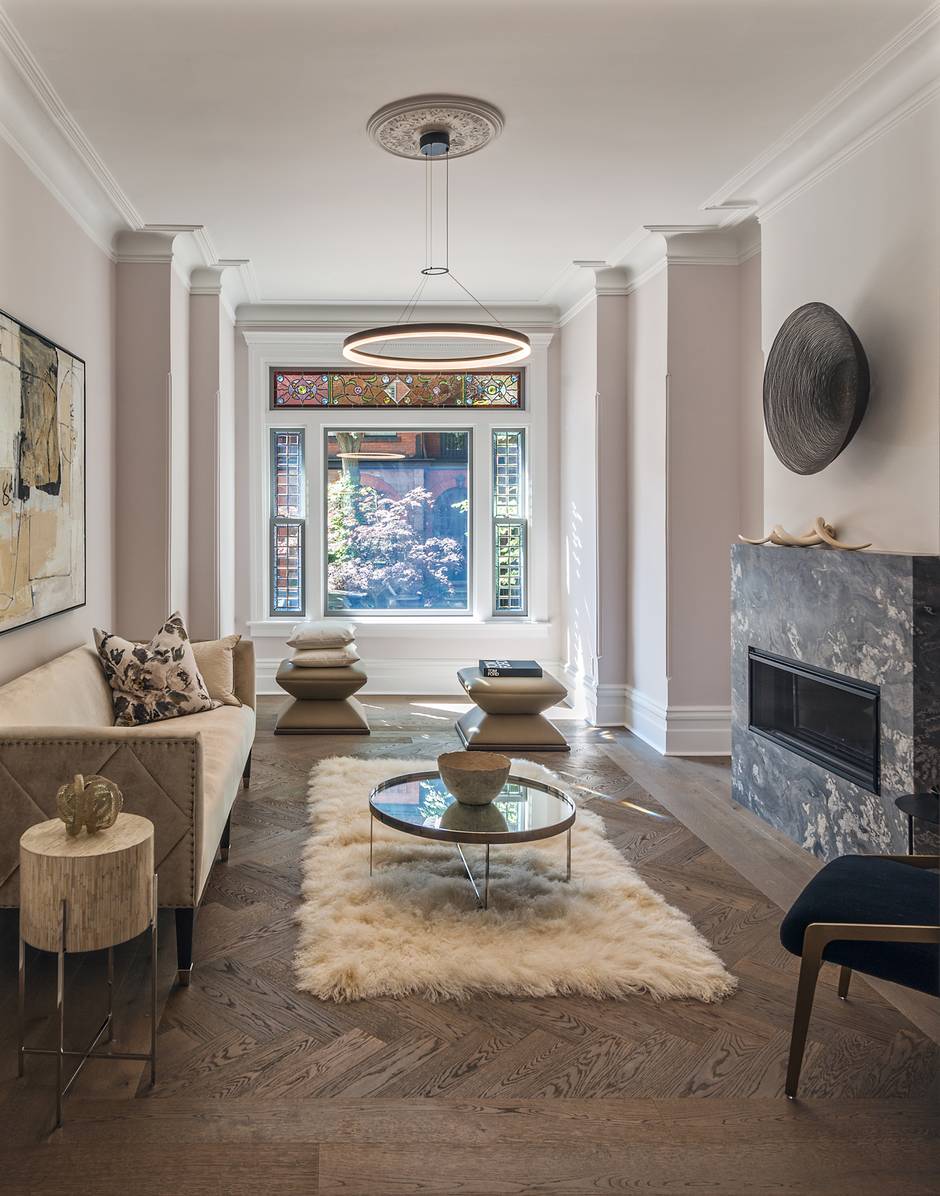 A living space in the home on Tranby Street. (Bob Gundu)

And yet the usual corner-cutting of that process was absent. The couple, both Toronto-born but raised elsewhere -- Ward in London and Walker in Los Angeles – aimed to deliver “something Toronto hasn’t seen in a developer house,” explains Mr. Ward, “quality construction and a level of finishes that you usually see in end-user projects.” They hired a skilled builder, Rob Martjak of Geronimo Construction Management, and got excellent workmanship. Ms. Walker adds: “We want to make places that we would be happy to move our family into.” 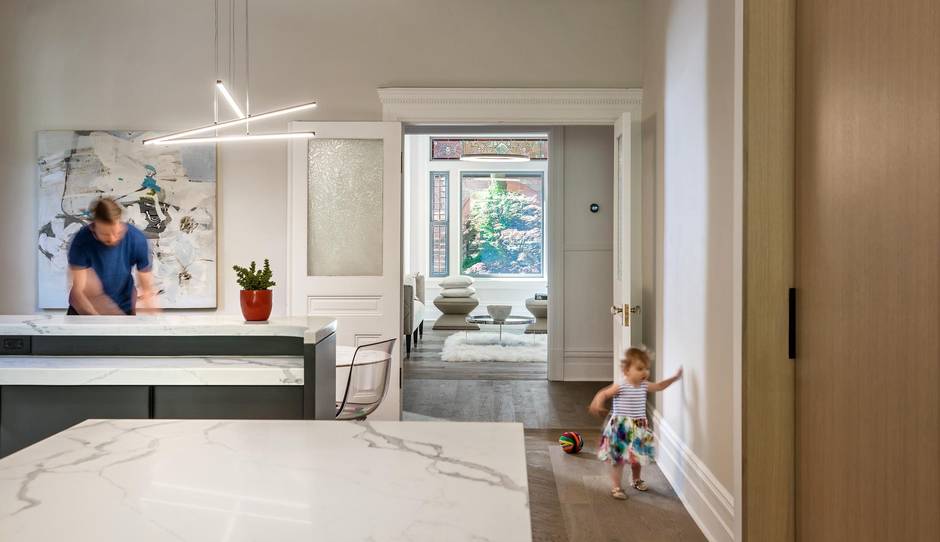 A view from the kitchen. (Bob Gundu)

According to the architect, they followed through on that rhetoric. “Every time there was a choice to make, they went the right way,” Ms. Willamson says. Ms. Walker, who has experience in retail merchandising and interior design, collaborated on the interior finishes with Ms. Williamson. Mr. Ward, a former construction manager for the Toronto development company Verdiroc, speaks with pride of the house’s mechanical systems and new water supply pipe. 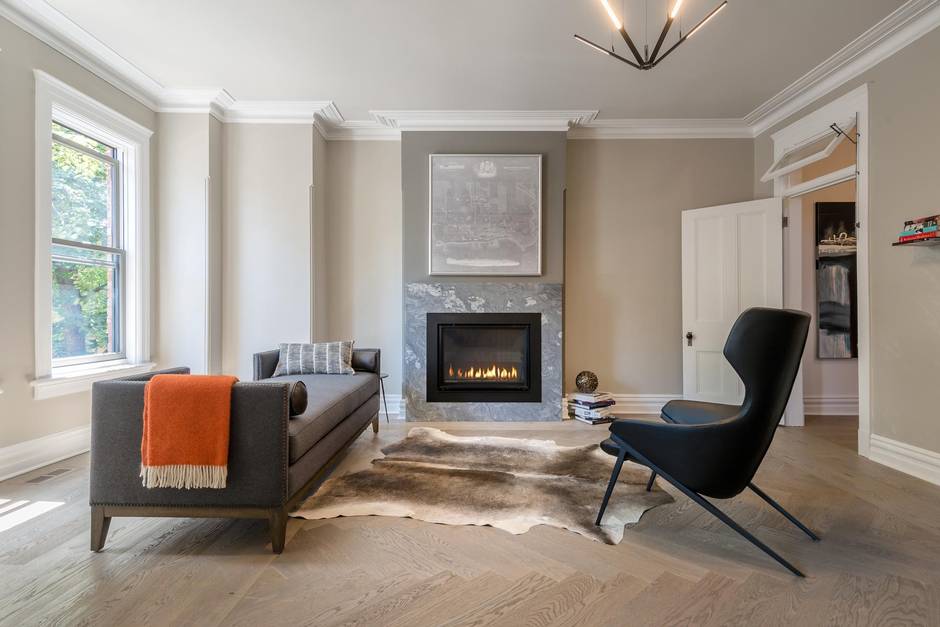 But they didn’t gut the whole house or take it back to the brick. Those phrases often pop up in real-estate listings as points of pride: local flip builders, often working without architects, assume their buyers want a house’s interior to be completely new. It’s also faster – and cheaper – to pull a house apart and put up new drywall than it is to restore plaster. The result is often a new and expensive house with generic, poor-quality interiors and no soul.

To their credit, Mr. Ward and Ms. Walker didn’t do that. They see both an aesthetic argument and a business case for being more delicate. “We wanted to bring the international design aesthetic,” Ms. Walker explains. By this she means “something that had all the conveniences and the clean straight lines you associate with modern architecture but also preserved the history of the home.” 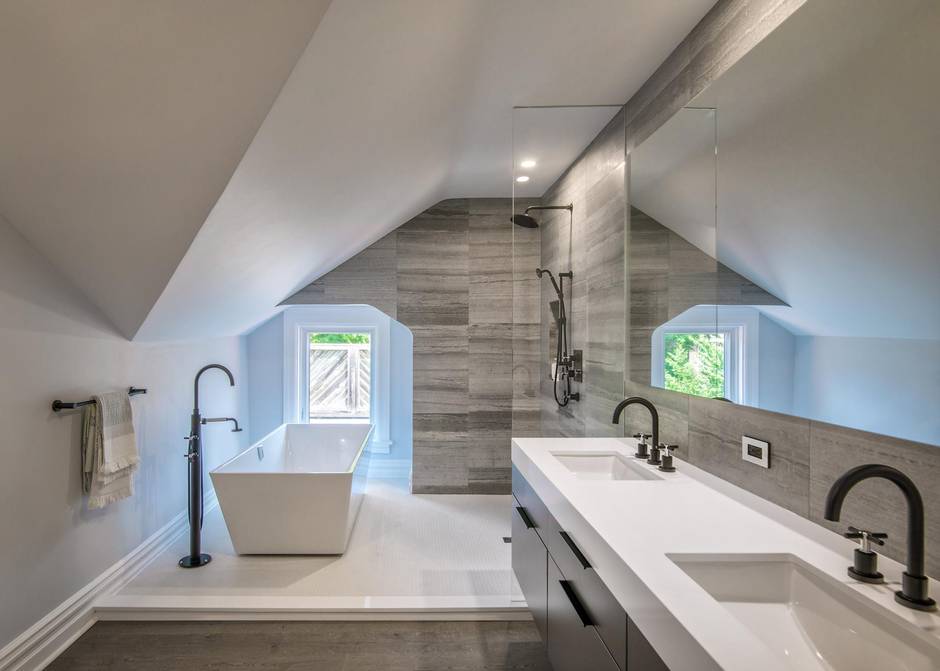 This one has history, and soul. It’s not all straight lines. Up on the third floor, the upper casing around a doorway hangs at a precarious slope; it’s obvious that the structure of house has settled, pulling the doorway out of true. Previous owners have shaved off the top corner of the door to keep it moving. And 3Gen left it that way, imperfect and charming. “This is what gives a house personality,” Ms. Walker says. “We would never change that.” 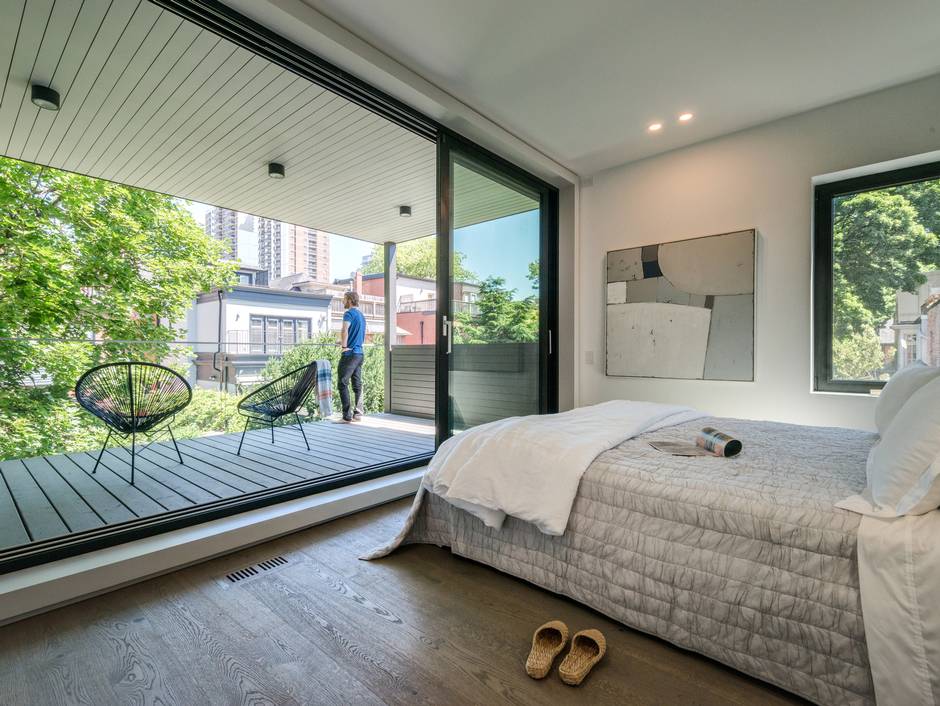 The second-floor master suite is small, with a deck almost the size of the room itself. (Bob Gundu)

The new additions have personality as well. As Ms. Williamson walks us into the second-floor master suite, it shows itself to be atypical: the walk-in closet and the bathroom are generously sized and finished, but the bedroom itself is small. It just holds a king-size bed, overlooking the second-floor deck; the deck is about the same size as the room, and the deck is a piece of architecture. The walls and ceiling are lined with horizontal wood slats with a coat of grey paint. They are perfectly true and perfectly spaced. Not many architects could make a pine deck with such beauty and rigor. Not many developers would ask.

And, apparently, their approach paid off. “It’s more of a risk than some developers take,” Mr. Ward explains. because it is reflected in the sale price.” But they are “very happy” with the sale price. “And this house has stood for 100 years,” Ms. Williamson says. “Now it’ll stand for another hundred.”