Toronto's rental market is the hottest it has been in years, with bidding wars breaking out and rents soaring, according to a new study that predicts Ottawa's new stricter mortgage qualification will make the region's rental market even less affordable.

The average monthly rent for a condominium in the Greater Toronto Area rose an annualized 9 per cent in the third quarter, to $1,986, Toronto market research firm Urbanation Inc. wrote in a new report released Friday. The study tracks condo units rented through a realtor over the Toronto Real Estate Board's Multiple Listings Service.

Within the City of Toronto, the rent on an average 717-square-foot condo unit reached $2,044 in the third quarter, breaking the $2,000 monthly price barrier for the first time. In the city core, average rents rose 10 per cent to $2,145, or $3.10 a square foot. Condo rents grew nearly as quickly in the suburbs, rising 7 per cent from the third quarter of last year to $1,749.

Related: Do long-time renters stand a chance of home ownership?

Related: How does Montreal maintain its enviably low rents?

"We've never seen numbers like these," said Shaun Hildebrand, senior vice-president of Urbanation, which has been tracking quarterly GTA condo rental statistics since 2011.

The typical rental condo spent an average of just 12 days on the market, with roughly a quarter of all units witnessing a bidding war among renters. The number of condos rented for over asking price in the region has doubled since the same time last year, Urbanation found.

Skyrocketing demand for rental units is being fuelled by strong job growth in the region and a jump in people migrating to the GTA from other provinces, which this year is the highest in 10 years, Mr. Hildebrand said.

At the same time, the supply of new condo units in the GTA dropped 30 per cent from year-ago levels as developers have launched fewer new projects amid a shrinking supply of available land, lengthening permitting delays and warnings from analysts about an oversupply of condos. The number of new condo rental listings fell to a five-year low of just 930 units in the third quarter.

A 10 per cent rent increase in a single year is an astonishing leap in a city where rents typically have risen by 2 to 3 per cent a year and had been flat for several years until recently, providing some relief to residents priced out of the hot housing market, Mr. Hildebrand said.

"[Rental] was kind of the one area of the market where there was some balance and some level of affordability and that was being maintained," he said. Now "there really is no balance in the marketplace, ownership or rental."

He estimates that the typical buyer will need to earn $86,000 a year to afford a condo under stricter mortgage qualification rules that kick in on Monday, a 17 per cent increase from $73,000 under the existing laws. That will push some prospective buyers into the rental market instead.

New regulations effective Nov. 30 will prohibit mortgages on investment properties from being covered by government-backed insurance, which could make financial institutions less willing to lend to condo investors.

Combined, the changes are likely to drive up demand for rental units while shrinking the supply of new rental investors, Mr. Hildebrand said. "It sort of seems to be to be the wrong time to be doing this," he said. "Even before the changes come into effect, we're seeing the lowest level of supply in the rental market that we've seen in years."

One upside to Toronto's overheated rental market: rents have grown so fast that developers are now beginning to shift their focus away from condos toward apartment buildings. The number of planned new rental apartments in the region has more than doubled in the past year, to more than 20,000, hitting its highest level in nearly 25 years. Rents in the city core have hit $3 a square foot, the level at which new rental projects become economically viable, Mr. Hildebrand said.

Even so, the number of new apartment buildings under construction is still too small to meet the record demand for rentals, which is set to only increase in the coming months as more buyers are priced out of the housing market.

"With the government moving to effectively raise rental demand and restrict supply I don't see any relief for renters in the near-term," Mr. Hildebrand said. 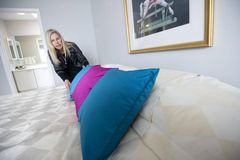 Ottawa has no more plans to cool hot housing markets, Morneau says
October 13, 2016
Sellers are losing the upper hand in Vancouver housing market
Subscriber content
October 13, 2016
Follow Tamsin McMahon on Twitter @tamsinrm
Report an error Editorial code of conduct
Due to technical reasons, we have temporarily removed commenting from our articles. We hope to have this fixed soon. Thank you for your patience. If you are looking to give feedback on our new site, please send it along to feedback@globeandmail.com. If you want to write a letter to the editor, please forward to letters@globeandmail.com.
Comments