My dad’s basement workshop taught me a great deal about what the “Home of the Future” was going to be like. There, in the pages of his 1950s and ‘60s Popular Mechanics and Popular Science magazines were richly illustrated articles featuring robot maids, push-button dinners, automated everything and helipads on flat roofs. And the houses that featured these things usually had walls of floor-to-ceiling glass.

Except for the personal helicopters, many of these predictions have come true. We have Roombas, iPhones to control lighting, thermostats and blinds, and prepackaged food that takes seconds to reach the table. Life is good, no?

But we still throw tons of heat or chilled air against the interior walls of our houses because they’re so poorly designed. In other words, we don’t have futuristic insulation.

It may be boring, but your building’s envelope is the most important thing going, especially in a country that now experiences a temperature range of 35 to –35 C. And “bone dry in the winter to stifling humidity” in summer, says Michael Manning, president of Greenbilt Homes. The best way to combat that, he continues, is with your house’s shell: “We really believe that that’s the low-hanging fruit of a superior built building.” 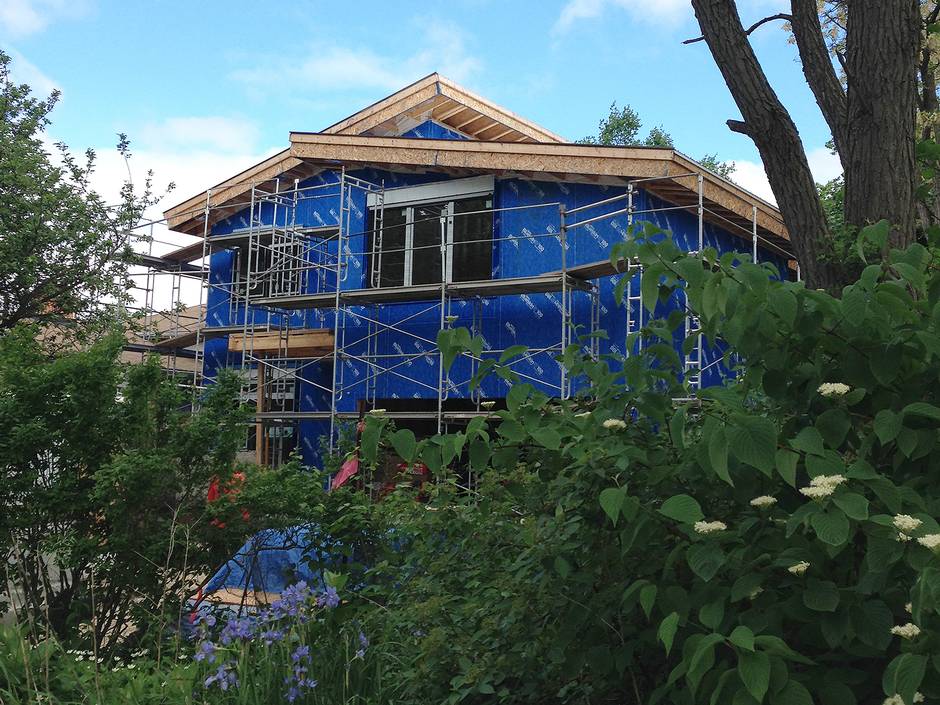 And the best way to become superior is to jettison that stupid vapour barrier, Sustainable.TO principal Paul Dowsett says, since it only works when our homes are in heating mode. “Our building code still does not understand that we cool these boxes down in the summertime,” he offers.

“It’s always considering that the vapour-drive is from the inside out. Well, that’s fine in the winter, because that’s what it’s doing,” he continues. “But in the summer, the vapour-drive is the other way, so that sheet of poly is in exactly the wrong place in the wall.”

To demonstrate this “vapour open” system, which dries in both directions, Sustainable.TO’s Nicholas Discenza appears from inside the under-construction home at 88 Risebrough Ave. carrying a box in each hand. One shows the cutaway of a code-minimum wall, the other what Greenbilt and Sustainable.TO call “The Toronto Method.” 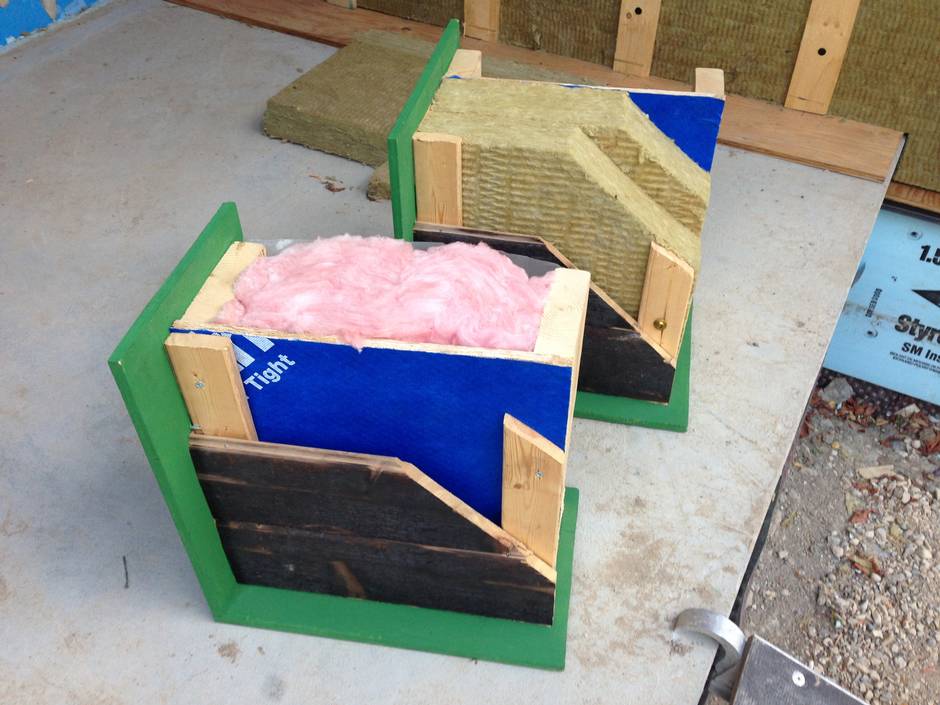 The code wall, as one might suspect, shows the following strata: vapour barrier, pink fibreglass insulation (which “promotes the growth of mould,” Mr. Dowsett says) and no insulation on the layer closest to the elements, only a sheet of house-wrap, such as Tyvek.

The Toronto Method wall, on the other hand, places six inches of mineral-wool insulation, such as Roxul (made in Milton, Ontario), on the outside of the structure, which eliminates thermal bridging almost entirely. There is an additional 3 1/2 inches within the stud cavity. This gives the home an exterior insulation value of R24.

“There’re a lot of really intelligent people supporting this concept, but it just hasn’t gotten traction yet,” Mr. Manning says. “So I would dare say we are on absolutely the cutting-edge with this building.”

The team doesn’t stop at the walls, however: Passive House-rated, triple-pane windows are everywhere. And, inside, some of those windows combine with the home’s shape to do work as well. A staggered roofline allows for three banks of clerestory windows, one in each of the three principle rooms on the second floor. The centre window in each bank opens to allow warm interior air to escape in summer. 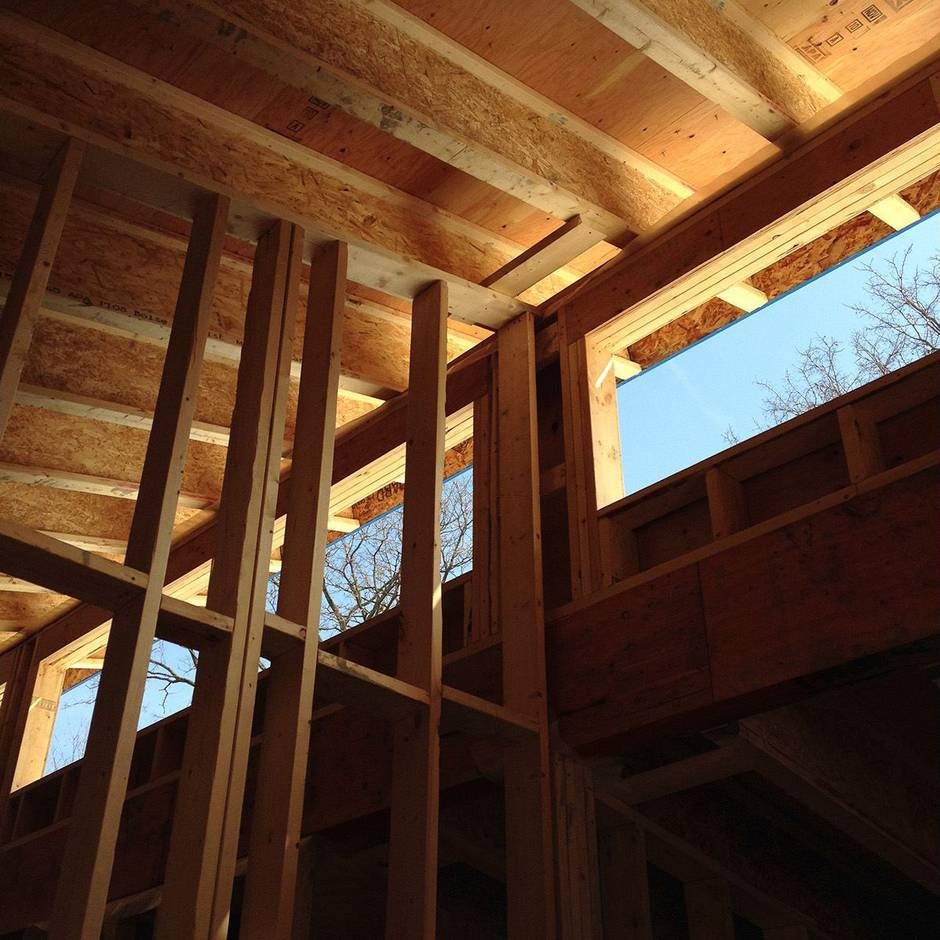 “This was something that we borrowed from mid-century modern architecture, where the architecture does the work rather than the machines,” Mr. Dowsett explains.

The clerestories face east, so cooler morning sun enters and lights the interior, including the master bathroom through a transom window. There is also an opening in the floor (which will be surrounded by a glass railing) that permits that same light down to the first floor. This hole also completes the airflow loop, since warm air rising up the stairwell (to vent through the clerestories) displaces air already on the second floor, which needs a place to go.

“This is the supply duct,” Mr. Dowsett laughs as he points to the stairwell. Then he swivels and nods towards the hole: “And that’s the return duct.” 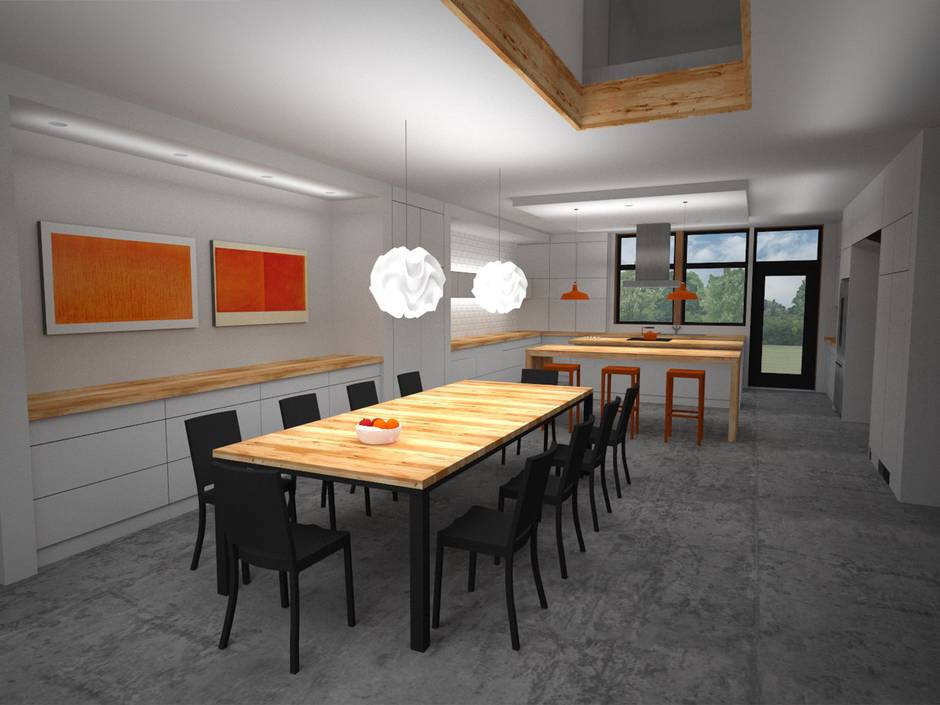 A hole in the ceiling above the dining room will bring light from upper windows to the main floor. (Sustainable.TO)

This low-tech solution, combined with reversible ceiling fans, Energy Recovery Ventilators and a dehumidifier, will make air conditioning unnecessary. Well, maybe, Mr. Manning says. The clients are “going to live through one summer” before making their decision. The home will have roughed-in connections for ductless mini-split units. It will also have roughed-in connections for rooftop solar panels.

For the winter, the home will get its heat on all three floors – basement, main and second – via exposed concrete radiant floors. Basement walls are Styrofoam-free, insulated concrete forms by Durisol made in Mitchell, Ontario.

The target is to reduce the home’s energy consumption by 80 per cent when compared with a typical home using very few “moving parts,” Mr. Dowsett says. “The moving parts are the things that fail when we have these power-outages, so let’s look at all the non-moving parts that keep you comfortable.”

“What differentiates this from other houses is that all these strategies work together,” Mr. Discenza adds. “We’ve toured through other boots-on-the-ground events where they only focus on air-tightness … but there’s no consideration for the air quality within.”

Speaking of boots-on-the-ground, 88 Risebrough Ave. (Finch & Bayview) will be open to the public on September 10, 2016 during Green Energy Doors Open from 10 am to 4 pm. Admission is free.