Before it was a dream home, the Dunn House in Parkdale was a missed opportunity. The residence has the exterior hallmarks of a classic Victorian abode – red brick, window sashes and eyebrow lintels – except that it’s incredibly spacious. In Toronto, where the old houses tend to be tall and skinny, the Dunn House is an unusual 30 feet-wide. The previous owner, however, subdivided the space into four dingy units, with a rabbit’s warren of private entrances, hallways and staircases.

Elise Larsen and her husband, Richard, bought the place in 2013 and hired the Practice of Everyday Design to redo the interiors. The seven-year-old firm – comprised of siblings Antoine and Melanie Morris and partner David Long – has an outsized reputation in part because of Eden House, a Mississauga bungalow turned into an autumnal, woodsy retreat. 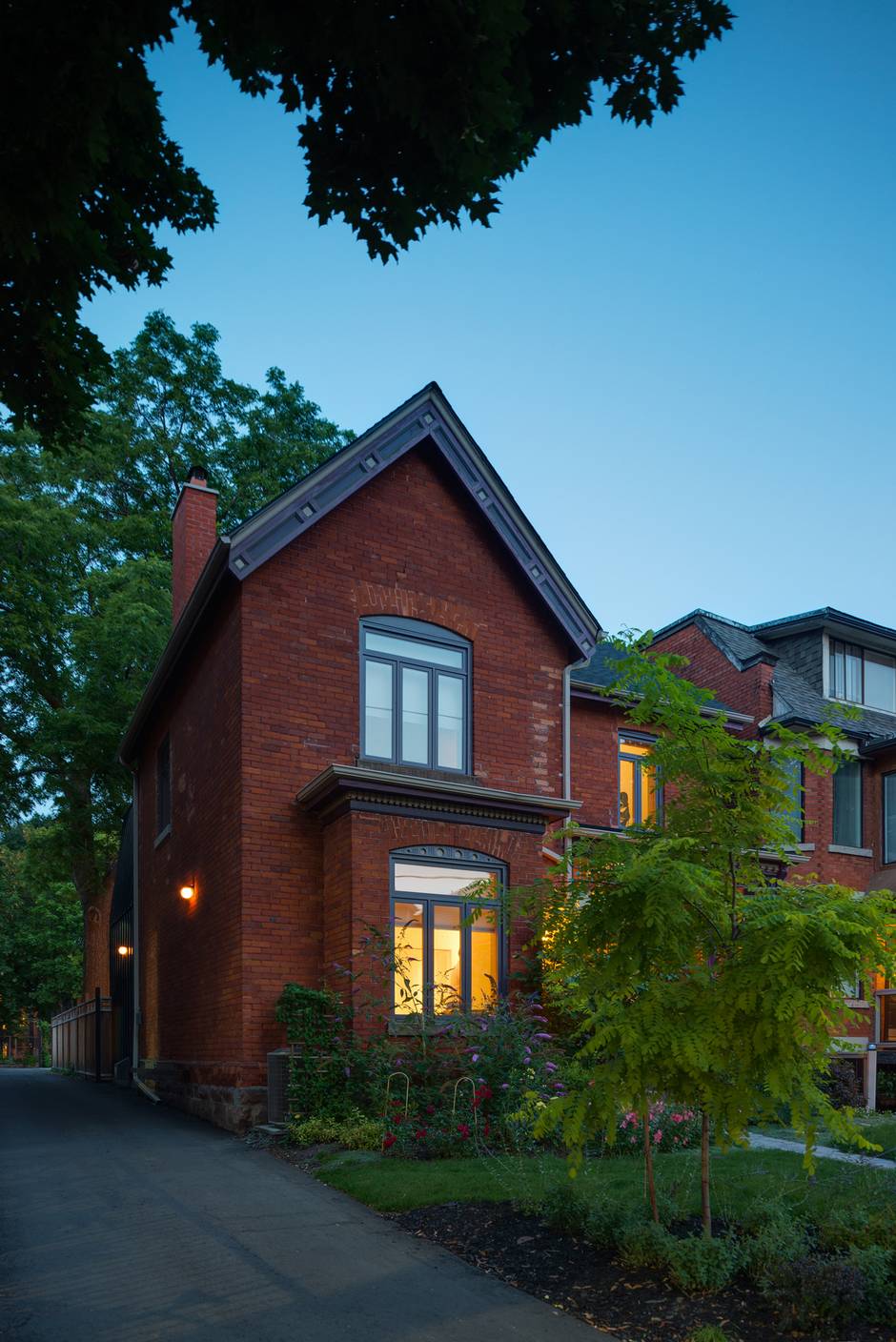 Elise and Richard, a young professional couple, wanted a home to showcase their design-savvy sensibilities. Elise’s family is from Denmark, where Poul Henningsen’s PH5 – the classic pendant lamp with multiple shades that diffuse and soften light – and Borge Mogensen’s spoke-back sofa could be found in every second home. “There was no question we’d have those in our home, too,” she says. Richard is a Montrealer whose childhood obsession with geology and dinosaur bones turned into an adult passion for collecting. “We’re novelty and stimulus bound,” he says of himself and Elise. “We like sensual objects and we like to be around nice things.”

The house embodies this proclivity. You might say it is the finest acquisition in an already fine collection of furniture, lamps, books and tchotchkes. The aesthetic is mid-century Scandinavian but defined in the broadest possible way. Everything, from the finishes to the furnishings, encapsulates not just the sleekness of Northern European design but also the woodsiness, hominess and durability. 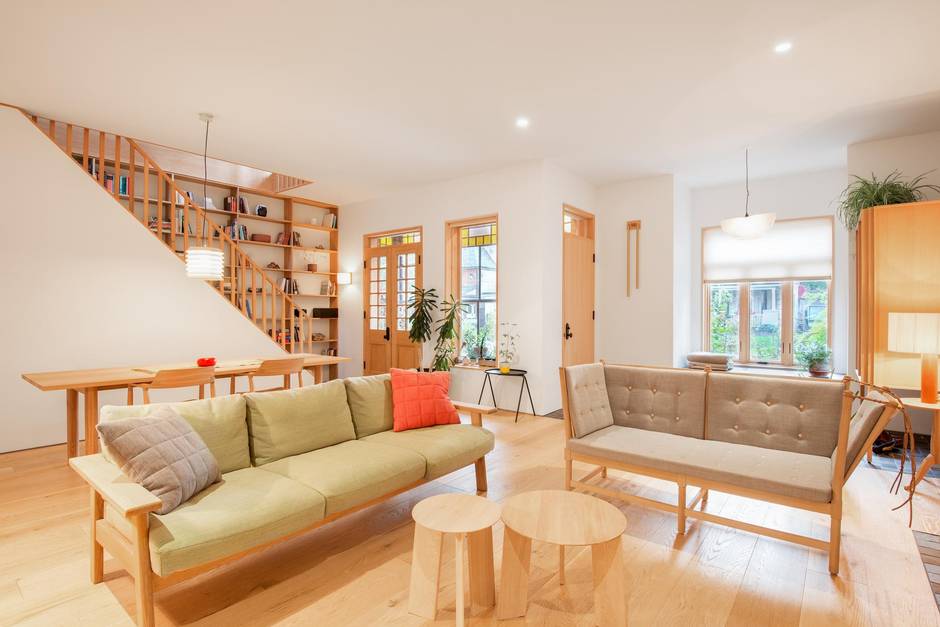 Everything, from the finishes to the furnishings, encapsulates not just the sleekness of Northern European design but also the woodsiness, hominess and durability. (Arnaud Marthouret / Revelateur-Studio)

To transform the space, the architects gutted it and then expanded it in all directions. They knocked down partitions, raised ceilings, built an alumina-clad addition to the back and deepened the basement. The feeling is of a building belatedly making good on its potential. The house has always been wide; now, it’s gracious and airy, too.

Out of respect for the neighbourhood, the team took a non-interventionist approach to the front façade. They reappointed the ruddy brickwork and painted the window casings in their original purple. The real transformation happens indoors. Move though the closed porch into the main space, and you may feel that you’ve zoomed past Victorian Toronto and landed in mid-century Denmark.

The downstairs is a single room with a partial divide – a remnant of the old exterior wall – separating the living-dining area from the kitchen. The interior has the minimalist ambience so often associated with contemporary houses but without the glossy sheen. Instead of stainless steel and shiny laminate, the firm opted for matte, soft-tone finishes: oak floors brushed lightly with oil, Baltic plywood cabinetry with a maple veneer and occasional touches of exposed brick that’s been lime-washed to a milky white. 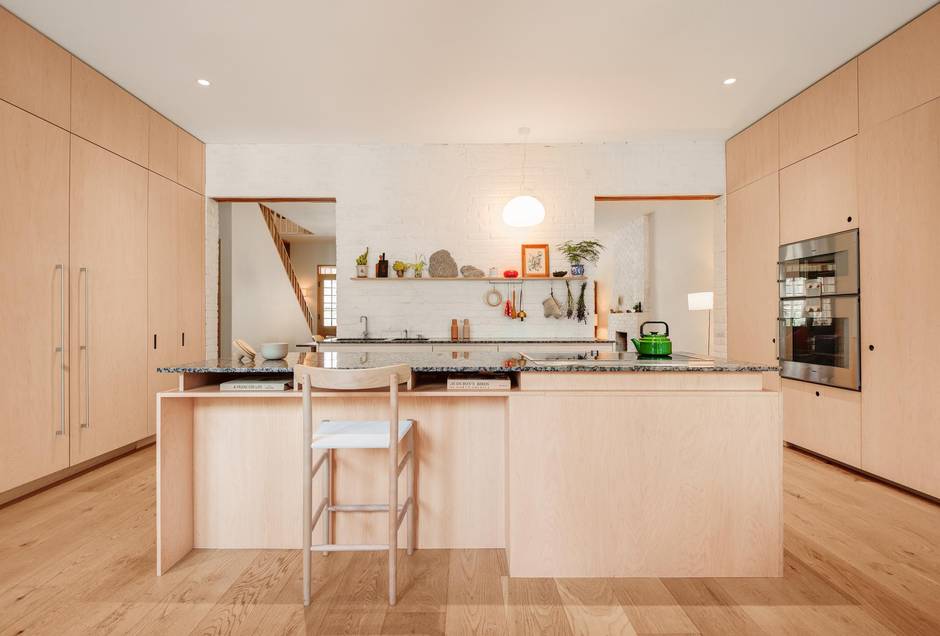 Practice of Everyday Design’s goal was to showcase the homeowners’ items that are meant to be seen and hide everything else. ( Photos by Arnaud Marthouret/Revelateur Studio)

Designing for collectors is tough. If you have too much display space, the site becomes cluttered. But if the interiors are too streamlined, where will Richard display his mammoth’s tooth or his ancient petrified wood? The goal, then, is to showcase the items that are meant to be seen and hide everything else. The breakfast nook and its attendant appliances (coffee machine, toaster) are behind cabinet doors, and there are open slots beneath the kitchen counter for laptops, cutting boards and cookbooks – items you’d want at hand but out of sight. To showcase collectables, however, the Everyday Design team set ledges, generous windowsills and a two-floor oak bookshelf behind the main staircase.

Climb alongside it to the second-floor landing, and you’ll encounter the house’s most distinctive feature, the piece Mr. Morris calls the “house within the house.” It is what it sounds like: an oak cabin made from the same wide-plank material as the flooring. “It’s like the floor is folded up and then folded back over again,” he says. 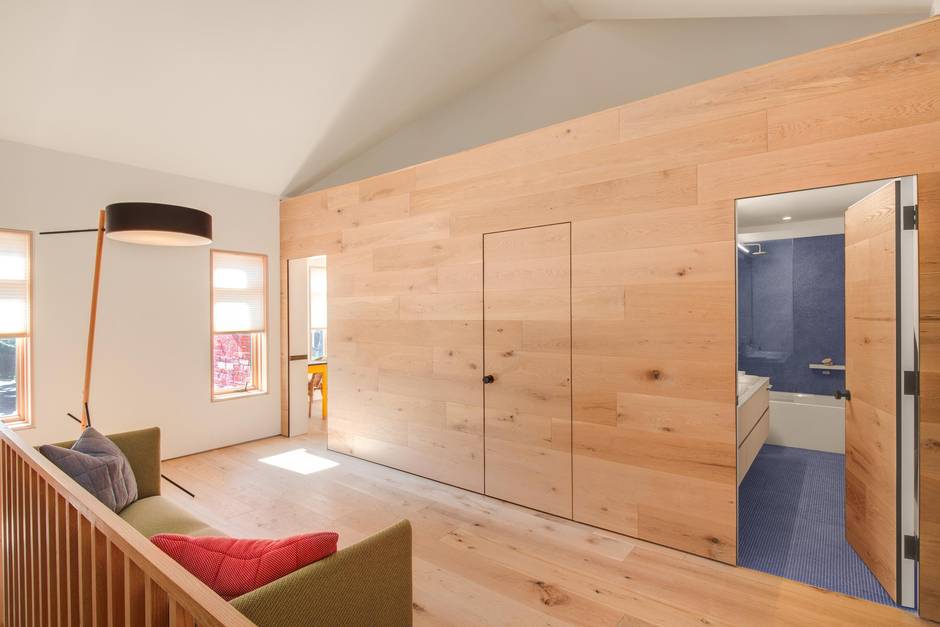 The second floor 'house within the house'. (Arnaud Marthouret / Revelateur-Studio)

The cabin contains a storage room, bathroom and guest bedroom. A to-be-installed ladder from Studio Junction will take you to the top, where there’s a nook beneath the pitched roof of the house. This secret attic, like something out of a 19th-century children’s novel, perhaps gestures to the home’s Gothic Victorian ancestry, but it’s also a cozy hang out.

The master bedroom is at the back of the second floor, where large east-facing windows bring in ample morning light. Like the rest of the home, it’s elegant and breezy, with millwork cabinetry and a sliding cedar panel to keep the flat-screen TV hidden from view. (“I hate the idea of TVs everywhere,” Elise says.) The adjacent bathroom is clad in pastel-coloured tiles designed by Ronan and Erwan Bouroullec. The ceramic is so deceptively delicate, it resembles perforated paper. 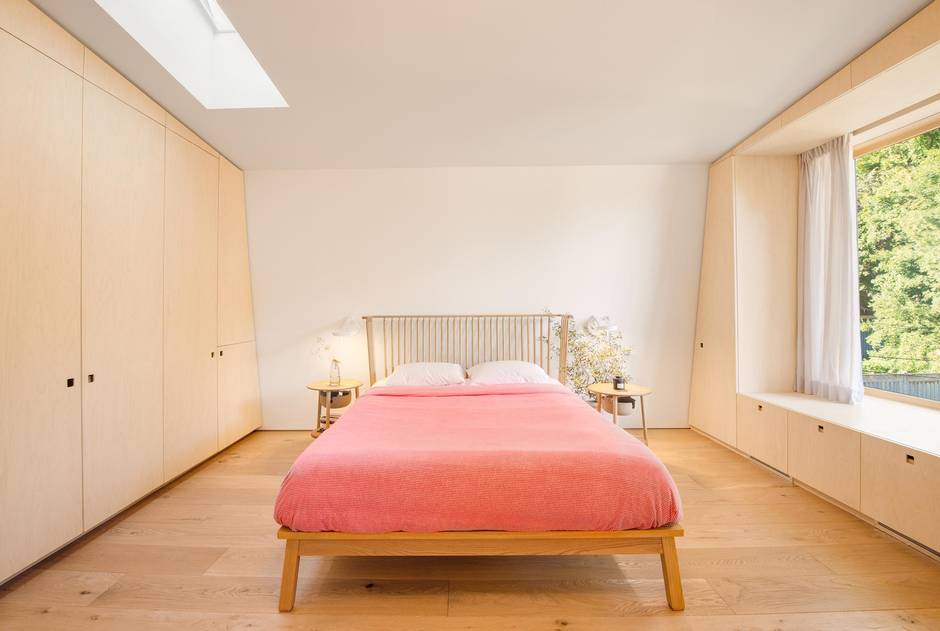 This juxtaposition – soft textures and sturdy materials – plays out in every room. The term “Scandinavian design” is often used as a shorthand for all things tony and minimalist, but Scandinavian aesthetics are also about durability. That understanding is what elevates the Dunn House above so many of its peers. Yes, you will see the hallmarks of chic urban living – chairs with curvilinear backs and spindly legs, pendant lamps that hang low like summer moons – but don’t mistake lightness for delicacy. Everything is built to last and even to get scuffed over time.

In a telling move, the couple deliberately chose to leave their massive bookshelf unvarnished. “Eventually, there will be a smooth gradient from where we touch it, and it will pick up the oils from our fingers,” Richard says. “But that’s okay. It will only get better with age.” He could be talking about the entire house.