Sales of single-family detached houses commanding prices of at least $1-million have almost doubled this year in the Greater Toronto Area, as economists raise the spectre of a real estate bubble.

The GTA saw 2,876 sales of detached properties of $1-million or more in January and February, compared with 1,548 in the first two months of 2016, a new study by Sotheby's International Realty Canada shows.

Fierce competition is common amid red-hot demand and a shrinking number of monthly listings, said Brad Henderson, the chief executive officer of Sotheby's in Canada. "There is a confluence of supply and demand issues in the GTA," he said in an interview.

While some industry observers argue that foreign buyers are playing an increasingly influential role in the GTA, Mr. Henderson said the bulk of housing demand is from Canadian citizens or permanent residents who have been emboldened by low interest rates and a healthy economy.

He suggested that governments co-ordinate a broad approach to help corral runaway prices, including targeting speculators and introducing measures to boost supply. "Just reshaping demand isn't going to get us to where we want to be.

A series of programs is needed to help the market return to a balance between supply and demand," Mr. Henderson said.

Read more: In Toronto's hot market, why are these homes still for sale?

Economists forecast that last year's price surge in the GTA will continue throughout 2017.

"The evidence is stacking up that the GTA market has been divorcing from economic fundamentals since early 2016," said a research note this week by Toronto-Dominion Bank chief economist Beata Caranci and her colleagues, economist Diana Petramala and economic analyst Katherine Judge.

"Having a debate on whether there's a housing bubble is a distraction, since this tends to be confirmed only retrospectively. What we can say is that when comparing this housing cycle to previous ones that lack a happy ending, Toronto appears to be moving in that direction," they said. They predict that GTA prices for various housing types could climb another 20 per cent this year, after rising 17 per cent in 2016.

Last week, Bank of Montreal chief economist Douglas Porter issued a research note under the headline "Toronto's torrid housing: Who wants to be a millionaire?"

Mr. Porter wrote that "after peaking in 1989, it took Toronto home prices nearly two decades to fully recover their losses in real terms in the ensuing bursting of the bubble and slow recovery."

He asserted that a reasonable starting point to cool off today's "ridiculous" GTA house prices would be for the Ontario government to start taxing foreign purchasers.

But Mr. Henderson cautioned against such a move, pointing to lessons learned from the West Coast. The B.C. government implemented a 15-per-cent tax on foreign home buyers in the Vancouver region in August. Last week, the province revised the tax policy to retroactively exempt home buyers who have work permits, including those in the technology sector.

"The B.C. government's implementation created unintended consequences of pushing away the very kind of workers that B.C. wants to attract," Mr. Henderson said.

According to data from the Toronto Real Estate Board, the price of detached houses sold last month averaged a record $1.21-million in the GTA and $1.57-million in the city of Toronto.

Luxury listings are being snapped up. The analysis by Sotheby's shows there were 62 detached homes that sold for at least $4-million in the GTA in January and February, up 158 per cent from the 24 transactions during the first two months of 2016.

The GTA's housing boom contrasts sharply with the sales slowdown in the Vancouver region. The city of Vancouver saw 296 sales of detached homes for at least $1-million in the first two months of this year, down 56 per cent from the 680 transactions in the same period of 2016, Sotheby's said.

The price of detached properties sold last month within the city of Vancouver averaged $2.57-million, down 5 per cent from a year earlier, according to multiple listing service data. In Greater Vancouver, the average price for detached houses slipped to $1.76-million in February, down 3 per cent from the same month in 2016. Average prices for condos and townhomes, however, have been climbing.

"Remember that Vancouver is coming off an incredibly strong series of months in early 2016," Mr. Henderson said. 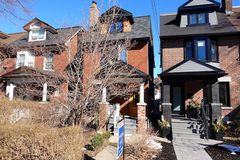 Demand fuels Toronto house prices, not lack of supply, study finds
March 13, 2017
Follow Brent Jang on Twitter @brentcjang
Report an error Editorial code of conduct
Due to technical reasons, we have temporarily removed commenting from our articles. We hope to have this fixed soon. Thank you for your patience. If you are looking to give feedback on our new site, please send it along to feedback@globeandmail.com. If you want to write a letter to the editor, please forward to letters@globeandmail.com.
Comments