Despite the recent construction boom that champions glass, steel, concrete, and fibre cement siding, Toronto remains a red brick city. At its peak, the Don Valley Brickworks was pumping out 25 million clay bricks a year, and until the 1920s, Greenwood Avenue between Queen Street East and Danforth Avenue had at least 10 brickyards “that produced hundreds of thousands of bricks annually,” according to Gene Domagala in Beach Metro Community News.

Most of these bricks still support the roofs over our collective heads.

So, when a developer comes crashing into a red brick neighbourhood with a plan to put up a glass tower, it’s understandable that residents might object, even if that developer is well within his or her rights to do so. 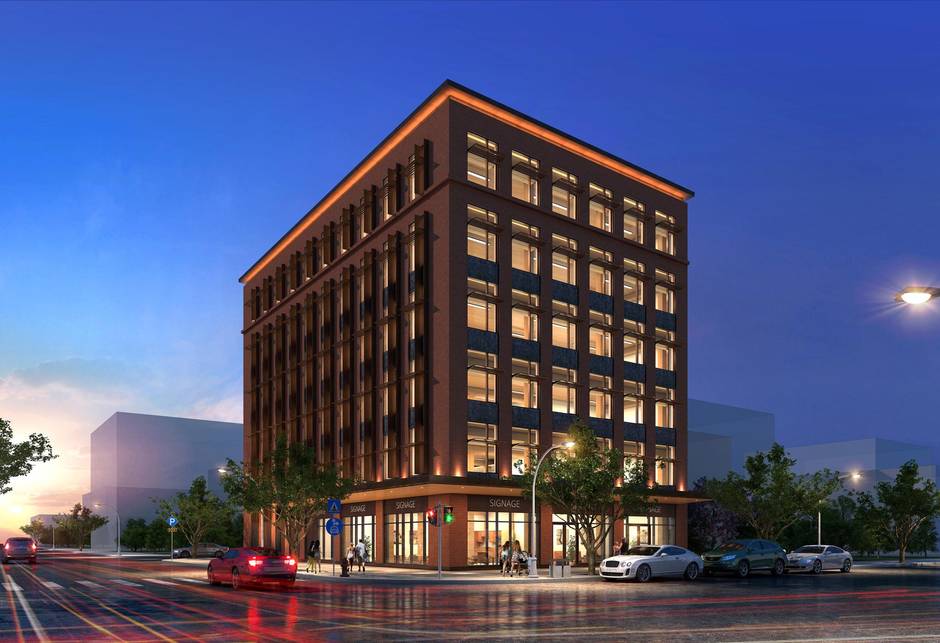 Architect Bill Dewson of William Dewson Architects and Patrick Chouinard, president of Timber Structures, would like to offer a solution: a mid-rise, fully timber-framed, red-brick-clad building that would not look out of place on Queen Street, the Danforth, Weston Road or among the 1920s Spadina Avenue shmata buildings by Benjamin Brown.

“It’s faster, it’s cheaper and there’s a great environmental story,” Mr. Chouinard says about mass timber buildings. “It’s sort of the unborn baby,” he continues, the excitement in his voice palpable. “For the past hundred years, where we’ve been building all these mid-rise and tall buildings out of steel and concrete, and now the baby’s born and we can build six-, eight-, 10-, 12-, 18-storey buildings out of wood.”

Not so fast. In Ontario, the building code was changed in January, 2015, to permit six storeys of timber, total. The duo point out, however, that the University of British Columbia’s Brock Commons residence, once complete in September, 2017, will be among the world’s tallest mostly-wood structures at 18 storeys. Quebec has allowed six storeys since 2010, and in 2015, increased to 12; in Quebec City, plans are now under way for Origine, a 13-storey residential building with a concrete first floor supporting 12 more of wood above. 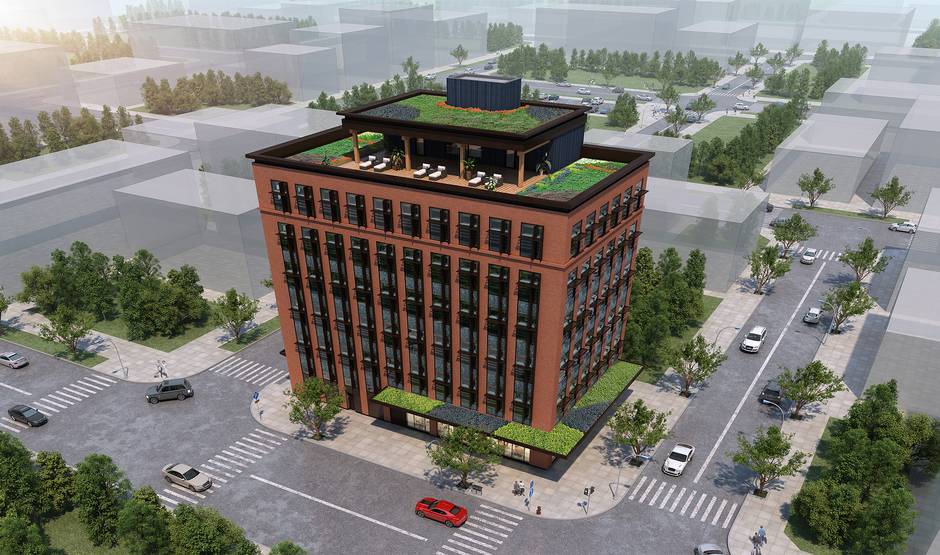 European cities are aiming higher, with a 25-storey office building under way in Vienna and a 35-storey proposal for Paris that would be the tallest in the world if completed.

These urban timber kings are confident that the Ontario government will see these examples, feel the pressure and increase what’s permitted here.

In the meantime, Mr. Dewson has gone to the trouble of producing highly-detailed renderings of a very heritage-looking, six-storey, wood-framed building even though he’s got no one to build it for … yet. “We’re doing a charrette before we have the owner, basically, and we’re assembling a team,” Mr. Dewson says with a smile.

And despite Mr. Dewson’s insistence that “this is a very simple box,” the building is strikingly handsome: From its glowing, floating roof, a brick band that separates the fifth and sixth floor, and the copper spandrel panels, all the way down to a wraparound awning and large retail openings at street level, this is a building that would be welcomed in any neighbourhood. There are also long vertical fins running down the façade and shades over each window to ensure sunlight doesn’t overheat inhabitants in summer, but is welcomed in winter; the shades also protect the most vulnerable part of the window system, caulking, from UV damage. 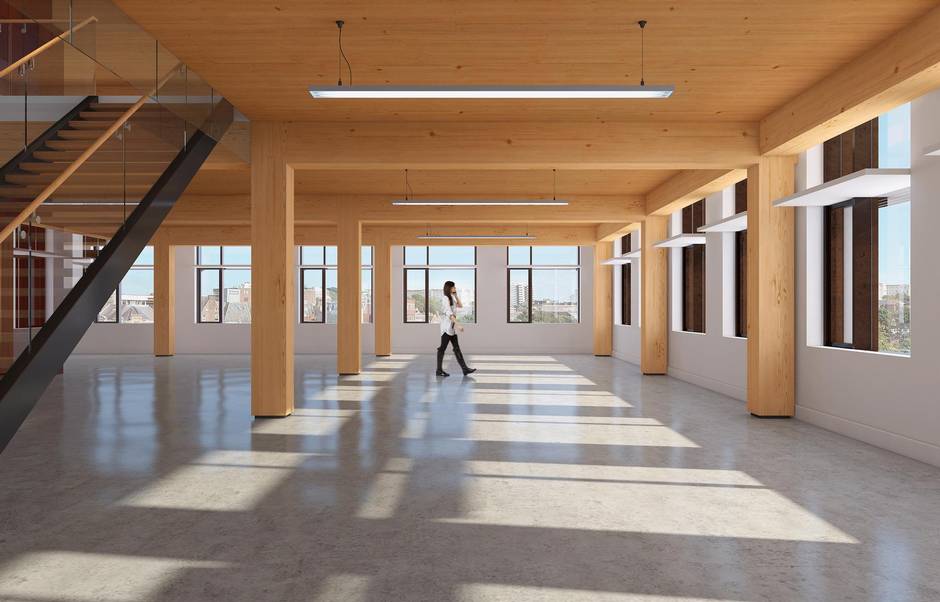 Ontario changed its the building code in January, 2015, to permit six storeys of timber, total.

Unlike the old warehouse buildings of Spadina Avenue (which have proven how adaptable this type of architecture is over the past century), Mr. Dewson’s and Mr. Chouinard’s dream building would include a high-efficiency envelope and features such as energy recovery ventilators (ERVs). And even if Toronto’s chilly January air did slip past that envelope (which it wouldn’t), it’s worth noting that wooden beams and floors are poor conductors of heat and cold, unlike concrete (and many of us can recall living in a room where the floor was freezing near the exterior wall).

In this brave new world of wood construction, even the load-bearing walls are made of wood. Mr. Chouinard notes that CLTs (cross-laminated timber) are more than up to the task: These massive structural panels come in sheets as large as 12 feet wide by 64 feet long, and in thicknesses ranging from one inch to 13 1/2 inches. And they’re manufactured fairly close by, in Quebec. Usually, everything arrives on site precut – window and door openings and electrical – like a “king-sized Lego set,” so long-term storage isn’t an issue and construction time is shortened. 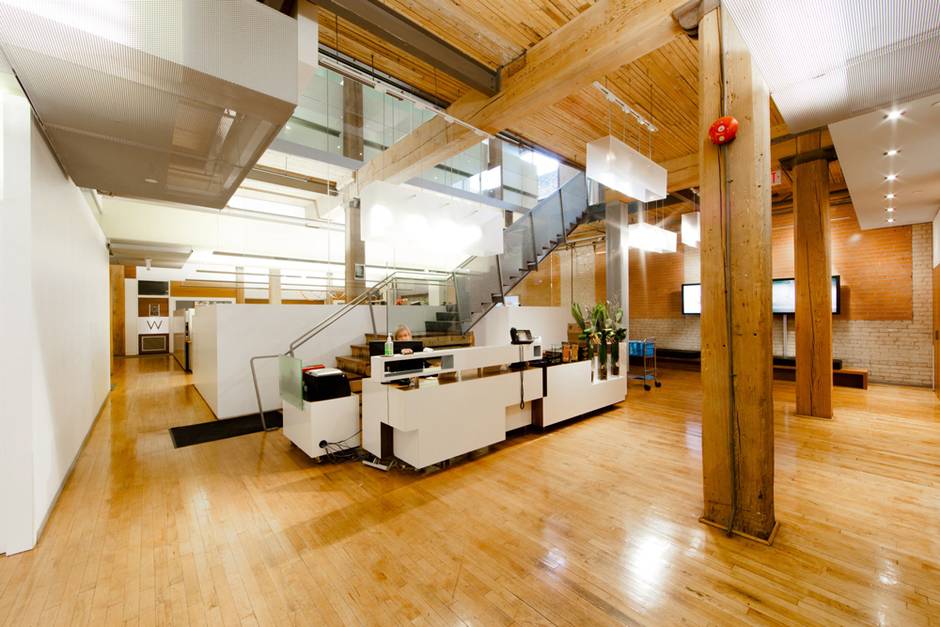 Estimates, the duo says, are a 20-per-cent reduction in construction time and a 4-per-cent savings in material costs when compared to the construction of a steel and concrete building. Plus there’s the environmental angle: Trees clean the air and store carbon dioxide, which stays trapped in the very bones of a timber building.

“It’s a terribly exciting time to be involved in the building industry,” Mr. Chouinard says.

Oh, and let’s not forget that people actually like living and working in buildings with big wooden bones; as an example, the duo point to Toronto-based Allied Properties and their hundreds of heritage brick-and-beam “Class I” buildings teeming with happy tenants across the country.

So, they ask, why not build more?

“I think most people agree that this is the future of construction,” Mr. Dewson says.