It didn’t help that the first time I approached the heritage façade at 70 High Park Ave. it was pouring rain. Had the sun been shining, however, it still would have reminded me of it: in very old cemeteries, often there is a wall where the most fragile and fractured tombstones have been set into concrete so that great-great-grandchildren can visit without fear of further damage.

This condo tower has a tombstone at its base. It was once the 1928 Third Church of Christ, Scientist by architect Murray Brown.

I think what annoys me most is that Mr. Brown’s façade is set so deep into the shadows behind the new building’s massive columns it looks bullied, small and sad. And although the octagonal lobby with original plasterwork and terrazzo floors has been retained (the “entry sequence” in architecture-speak), I just can’t get past – literally and figuratively – how the façade just hangs there, suspended in a blank concrete wall.

I wish the developer hadn’t bothered. 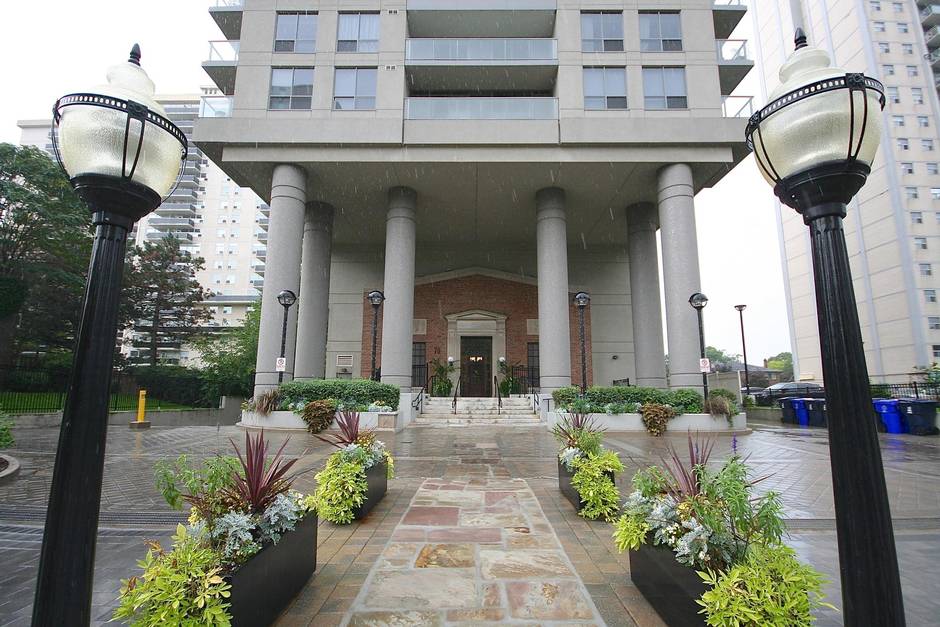 The Murray Brown-designed Third Church of Christ, Scientist looks like an after thought in the condo tower at 70 High Park Ave. (Dave LeBlanc for the Globe and Mail)

Three weeks ago, I presented the opposite case: a half-dozen instances where I suggested that façadism has worked, such as the Art Deco Concourse Building at 100 Adelaide St. W., with its knife-edge office tower companion, and the two façades at the corner of King and Sherbourne streets fronting condo towers, to name a few. And, instead of being tarred-and-feathered by readers, I answered some very civilized e-mails that mostly agreed with my choices, but wanted to bring a few other points to my attention.

One reader wrote that often “the details, proportions and materials” of new buildings inserted behind heritage façades “appear to lack in design richness.”

“Preservation of the old architecture,” she continued, “is not an excuse to leave the design of the new any less important.”

Another argued that façadism is akin to “ripping a page from the first chapter of a history book and gluing it into the fifth,” adding that it’s only a “short hop from façadism to out-and-out historicism, at which point we’re not making a city but Disneyland.” 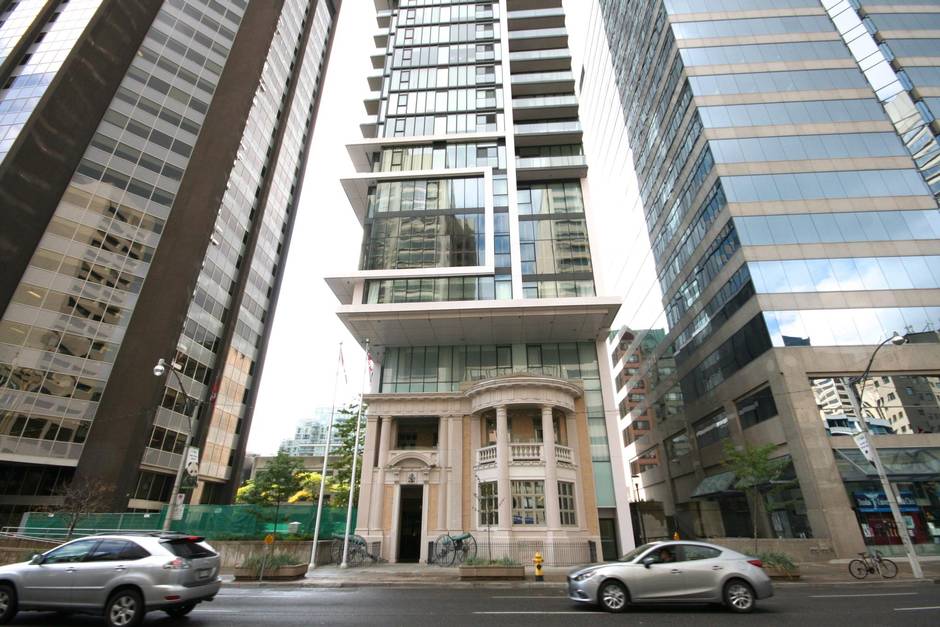 I think ol’ Walt might have enjoyed looking at the Royal Canadian Military Institute at 426 University Ave. As with 70 High Park Ave., the new building here, even if there is “design richness” – and that’s debatable – hangs over the 1907 building (expanded in 1912 and 1935) with a brutishness that turns the relationship between new and old into something cartoonish. Had the new building been pushed back further from the sidewalk, or a much more subdued curtain wall/metal siding combo been chosen (rather than the light-and-bright one there now), or, better yet, both of these things done, the overall composition might have been more palatable.

If we are saving heritage façades to give future Torontonians a sense of what the streetscape was like a century earlier, then what we save mustn’t look like it’s cowering under a new master. Where there is room on the lot, the new building must recede; if this is not possible, then much, much more attention must be paid to the interaction between the two eras of architecture where they intersect. The reason the Michael Lee Chin Crystal at the Royal Ontario Museum doesn’t sit well with many is because Daniel Libeskind’s new building stretches its angular metal limbs all over the heritage one like a greedy lover. 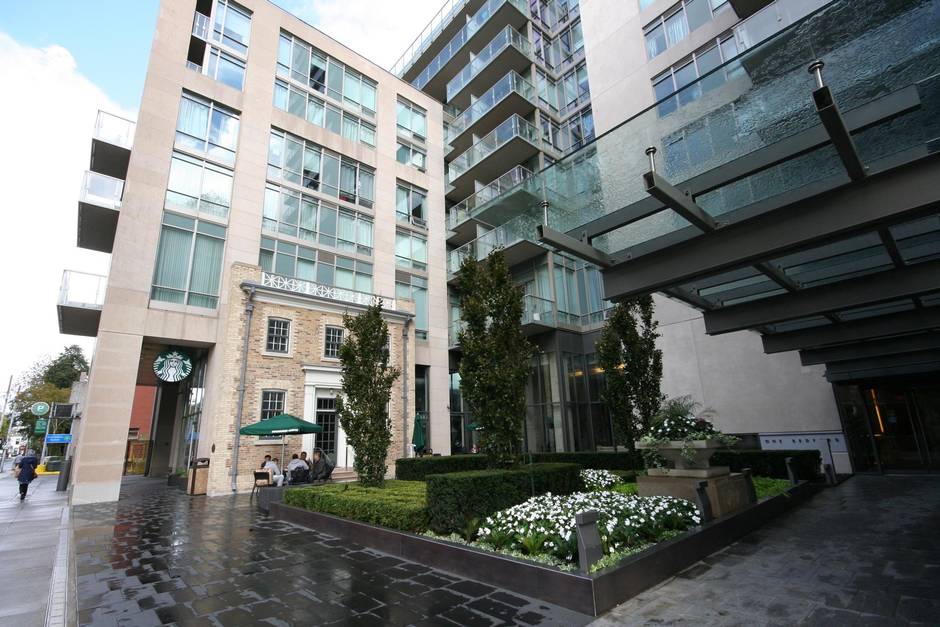 The former drafting studio of John Lyle – who gave us Union Station and the Royal Alexandra Theatre – is part of the courtyard of the One Bedford condominium. (Dave LeBlanc for the Globe and Mail)

When little attention is paid to how pedestrians encounter two competing eras, façadism becomes a tacked-on afterthought, something done by the developer because he or she was forced into it by the city. And I get that feeling whenever I look north from Bloor Street West while crossing Bedford Avenue, and see the little imprisoned face of the former drafting studio of John Lyle – who gave us Union Station and the Royal Alexandra Theatre – in the courtyard of the One Bedford condominium.

In 2010, Edward Skira wrote on urbantoronto.ca that the “reconstructed façade, deprived of its original context, does neither Lyle’s studio nor One Bedford much justice. Frankly we feel we would have been better off with it entirely gone, or completely relocated.”

And then there is the “reinterpreted heritage building” (their words) at Tableau Condominiums at the southeast corner of Richmond and Peter streets. Where once there was a red- and brown-brick, three-and-a-half storey warehouse with pronounced bays and raised-brick detailing – home to George J. McLeod Publishing long ago – there now sits a black brick, flattened face that a City of Toronto staff report called a “positive step that may help to provide a podium design that is more in keeping with the surrounding warehouse character” of the neighbourhood. I disagree: this is a negative step that never should have been taken. 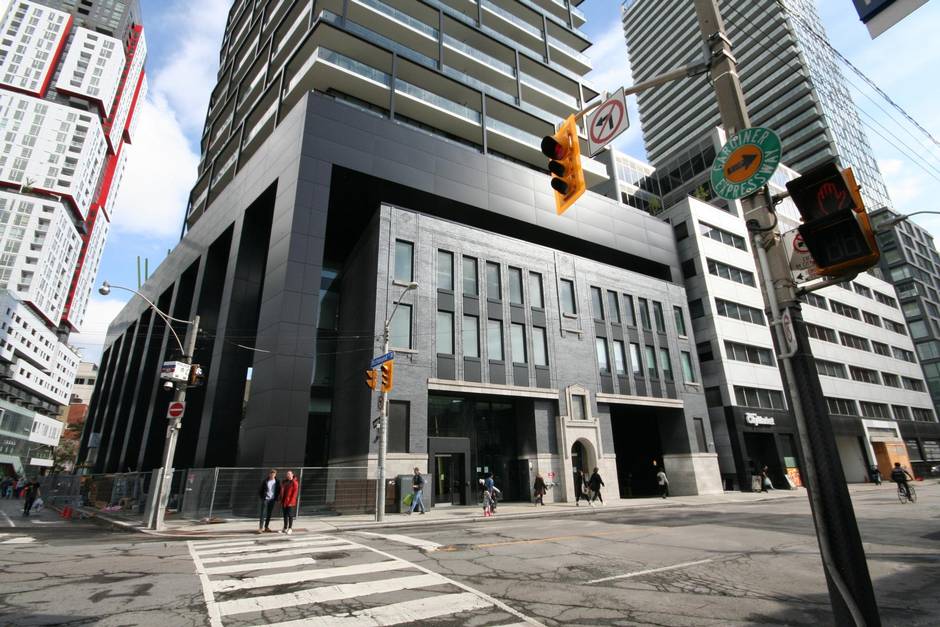 Tableau Condominiums at the southeast corner of Richmond and Peter streets. (Dave LeBlanc for the Globe and Mail)

Kitty corner to Tableau at 134 Peter St., however, the 1910, four-storey Weston biscuit factory has been fully retained via a complex system of “delta frames” (sets of tubular legs) that hold the new glass office tower, QRC West, over top. It’s a refreshing and welcome approach that might represent a sea change in how other developers handle the relationship between heritage buildings and their modern companions.

Because while façadism does work in some cases, too many examples stop us dead in our tracks.