James Stewart’s Integral House in Toronto is shown in August, 2014, before Mr. Stewart’s death that December.

The award-winning residence at 194 Roxborough Dr. was built in a Toronto ravine for a violinist and mathematician, who made it a haven for music and culture in the city. Now it has new owners – but they're keeping a low profile for now, Carolyn Ireland writes

Photography by Tim Fraser for The Globe and Mail

A Toronto house designed around a concert hall will soon be filled with rhythm again: The buyers of Integral House are a musical family with two young children.

For now the future residents are not revealing their identities.

Curious neighbours have heard that the buyers are an American couple with ties to Canada.

Mr. Maranger disclosed that the buyers own homes around the world. They are based in Toronto and plan to continue the custom of using the dramatic performance space for music and the arts, he says.

The architectural landmark set on a Rosedale ravine was listed for sale in April of 2015 with an asking price of $28-million. By the end of 2015 the price was reduced to $22.9-million and, more recently, $19.5-million.

Integral House: Inside a space for music designed by a millionaire mathematician

Toronto has seen an influx of foreign real estate buyers drawn to the conservative banking industry, stable political situation and reputable schools, agents in the luxury trade say. In recent years more Americans and Canadian ex-pats living in the United States have been shopping for properties here as the dollar declined in value compared with the U.S. currency.

The residence at 194 Roxborough Dr. was built for the late James Stewart, a violinist and mathematician who became wealthy from the sales of his ground-breaking calculus textbooks.

Dr. Stewart commissioned the Toronto-based firm of Shim-Sutcliffe Architects to design a dwelling that uses curves as an architectural expression of the beauty of calculus. The 18,000-square-foot house, with six levels descending into a forested Rosedale ravine, took nearly 10 years to build and was completed in 2008. It went on to win the Governor-General's Medal for architecture.

Dr. Stewart was a professor at McMaster University in Hamilton, Ont. who opened the house for events ranging from intimate salons to large charity fund-raisers before he died in 2014.

"James Stewart created a remarkable building, a wonderful venue for culture, performance and other arts. Our family is thrilled to own this extraordinary house in Toronto. We intend to continue to honour his community-oriented legacy by making our home available for events in the future," they say. 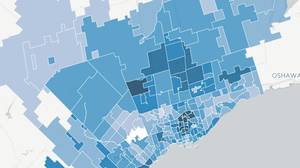 Want to learn how Integral House's neighbourhood compares to others in Toronto? Check our house-price data centre to find out.

Mr. Maranger, who represents Dr. Stewart's executors, says the house sold more quickly than expected. In the luxury market, it's not uncommon for houses to take two years or longer to sell. The relatively high asking price immediately reduces the buyer pool, of course, and in this case the house was a bespoke creation for a singular owner.

"We thought it could take two to three years just to find that very special buyer," says Mr. Maranger. "The more special and specific it is at the high end, the longer it takes to sell."

Mr. Maranger says some potential buyers weren't certain they could embrace the contemporary architecture. "It was more austere. The home itself was the art."

A seating area inside the concert hall.

The family that purchased it, however, does have respect for modern architecture, he adds.

The most unusual aspect is the tall, double-storey performance venue with undulating windows overlooking the ravine and galleries above for onlookers. That was created first and everything else followed. "The home was built around that element of the house."

The home is acoustically perfect, he says, but also idiosyncratic – especially compared with the typical family home.

He recalls that when the new owners visited the house, the children ran down the stairs into the hall and began singing.

"They were enamoured by the idiosyncracies," he says of the family.

Mr. Maranger and his team had showings for 24 "highly-qualified" prospective purchasers over the 18 months, he says. People who wanted to view the house had to be carefully vetted before they were given an appointment.

Mr. Maranger says the award-winning residence is certainly considered a trophy home by most potential buyers. "There's nothing like it in the world."

The feedback from many of the people who looked at the house was that the bedroom level wasn't set up for parents with kids. "Although it has four bedrooms, the configuration wasn't very family-friendly," he says, adding that he expects the new owners will make modifications to that area.

Any buyer group going through loved the sculptural blue glass staircase, he adds. "It was also beyond sculpture – it was a feat of engineering."

The setting in the ravine with serpentine stairs winding down the slope also captured a lot of attention, he says. Almost every time a family visited, the children would run all the way down the stairs into the ravine and up again. "It was quite amazing to see."

One day a group of students studying architecture at the University of Toronto came for a tour, as they often did when Dr. Stewart was in residence. "It was so fun to see their faces."

They were most intrigued, he says, by the wall of windows that separated the swimming pool from the outdoors and operated on a hydraulic system. In warm weather, the wall could be made to slip away below grade.

The reflecting pool and fountain.

He says people who viewed the house were divided roughly into three groups: Some were musically-inclined, others were charity mavens and a third group was wowed by the entertaining spaces. "People who like to party saw it as a party house."

Mr. Maranger says another party had made an offer on the house earlier this year but the two sides couldn't reach a deal. In this case, negotiations went back and forth for a few weeks. "It was both a happy and a sad day. Like any cycle, it's a completion of Dr. Stewart's passing." 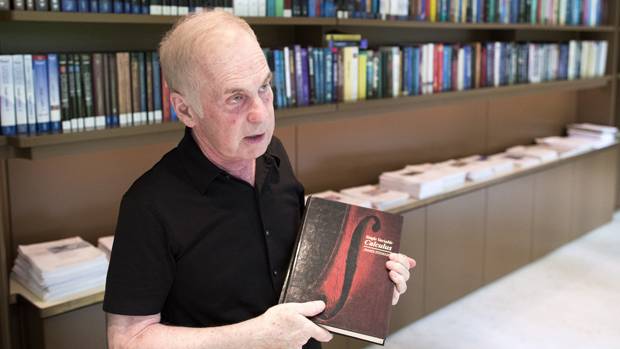 James Stewart devoted his life to math and music, Robert Everett-Green wrote in 2014

As for the community, he says that many will be heartened to learn that the professor's contribution to architecture and the arts will be preserved.

"I know people will be very pleased that it will carry on the tradition."

Mr. Maranger imagines the neighbours will be happy the house has new occupants after remaining on the market 18 months.