Finance Minister Bill Morneau will unveil Monday new measures aimed at slowing the flood of foreign money pouring into overheated housing markets like Vancouver and Toronto, a significant federal intervention in the sector.

Ottawa will close a tax loophole that allows non-residents to buy homes and later claim a tax exemption on the sales, a government source said Sunday. The government plans to make sure the principal-residence exemption is only available to individuals who reside in Canada in the year the home is purchased.

Globe Investigation: Real estate reform in B.C.: Everything you need to know

Housing prices have soared dramatically the last few years in the Vancouver and Toronto markets, triggering a vigorous debate about the role of foreign money. British Columbia has responded by imposing a 15-per-cent foreign buyers tax on homes and collecting data on who is buying property in the province. Ottawa has also been preoccupied with the issue, with Mr. Morneau creating a working group to conduct a "deep dive" into the state of the housing market and make recommendations on possible policy actions.

Mr. Morneau will announce new measures to combat offshore speculation, including closing the loophole, in a speech in Toronto on Monday. The moves follow a Globe and Mail investigation that revealed a network of speculators flipping homes for profit and avoiding taxes by classifying them as principal residences.

Under the Canadian tax code, homeowners do not have to report the sale of any property that they designate their principal residence, and do not pay tax on the increased value – or capital gains – of that home. In order to make that designation, a homeowner, their current or former spouse or any of their children must have lived in it at some time during the year for which the designation is claimed.

However, there has been widespread abuse of the exemption by foreign buyers who claim residency either for themselves or their spouses or children simply in order to avoid paying taxes on real estate speculation. Non-resident investors must pay capital gains tax at the time of a sale.

Multiple sources have told The Globe of the widespread abuse of the primary-residency exemptions in the Greater Vancouver area. The Globe has seen hundreds of cases in which homemakers or students were listed as registered owners on multimillion-dollar residential properties.

The new measure would make the exemptions available only to home buyers who are residents at the time of purchase.

The Globe's investigation discovered these cases usually involve a wealthy breadwinner who earns their living in another country, while parking money in Canada, through buying residential properties. Some of the homes are used by family members; others are simply left vacant.

Several expert sources told The Globe there are two ways to exploit the system – to sell those properties and pay no taxes. In the first scenario, the breadwinner claims to be a non-resident of Canada and pays no taxes here, while their spouse and children buy and sell homes registered in their names. The homes are purchased with money received as a "gift" from the breadwinner. The homes can then be sold tax-free, because the family members claim to be residents of Canada, classify the properties as their principal residences, and therefore pay no tax when they sell.

There is more widespread abuse in a second scenario, according to experts. That is when the breadwinner claims to be a resident of Canada but then doesn't report their worldwide income to the Canada Revenue Agency, as required by law. Because they claim to be residents, they can sell Canadian properties in their name, tax-free, even if they spend little or no time in Canada.

If these homeowners make their living in China, experts said it's difficult for anyone to determine what they actually earn, because it's next to impossible to get tax records from that country, even though China and Canada have a long-standing tax treaty. As a result, experts say, these wealthy people get away with claiming little or no income on their Canadian tax returns, while selling homes tax-free.

Tax accountants and lawyers who handle these cases told The Globe this can be done with multiple properties, primarily because the CRA doesn't require any resident to report any sale of a principal residence. Taxpayers simply have to fill out a form, but keep it for their own records, instead of submitting that information with their taxes.

Experts have urged Ottawa to require taxpayers to report the sale of all homes, even if they are claiming the principal-residence exemption.

"Everybody's biggest lifetime gain is from principal residence and [Canada Revenue Agency] is saying if you are a resident it is tax free and if you are a resident we don't worry," one Vancouver real estate accountant said Sunday. He spoke on the condition he not be identified out of fear of repercussions.

"So the CRA pushes them into residency claims. A wife and kid are allowed to stay in Canada as a resident and as such they are entitled to tax-free principal residence and as such they don't have to report it."

Mr. Morneau announced in June that the government was studying developments in the housing sector, with his department working with Canada Mortgage and Housing Corp. and the Office of the Superintendent of Financial Institutions while consulting with provincial and municipal officials.

In a bid to cool its hot housing market, British Columbia introduced a foreign-buyers tax this summer which applies to the sale of all residential properties within 22 communities of metro Vancouver.

The levy applies to buyers who are not Canadian citizens or permanent residents, and corporations that are either not registered in Canada or are controlled by foreigners, and adds $300,000 to the purchase of a $2-million home.

The CRA says it completed nearly 2,500 audits related to real estate in B.C. and Ontario between April, 2015, and June, 2016, and that the agency plans to do as many or more next year. 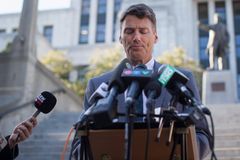 Follow Shawn McCarthy and Kathy Tomlinson on Twitter @smccarthy55 @KathyTGlobe
Report an error Editorial code of conduct
Due to technical reasons, we have temporarily removed commenting from our articles. We hope to have this fixed soon. Thank you for your patience. If you are looking to give feedback on our new site, please send it along to feedback@globeandmail.com. If you want to write a letter to the editor, please forward to letters@globeandmail.com.
Comments