If condo owners are feeling nervous about the number of cranes visible on the horizon these days, how must it feel to be among the builders of those partly finished high-rises?

A few of them assembled recently to share their views on the outlook for Toronto's condo market at a seminar on real estate investment sponsored by Queen's University. The panel included a lender, a receiver, a marketer and a couple of developers.

"We'll see who's the busiest in the next few years," quipped moderator and real estate agent Hunter Milborne.

All seemed to agree that there is a dampening in the voracious demand for condos that we've seen in the past several years. They also talked of tighter lending, rising inventories and nervous buyers. There was general accord that gradual cooling is likely a good outcome.

John Andrew, director of executive seminars on corporate and investment real estate for Queen's University, noted afterwards that the developers on the panel are among the most conservative. They were also among the first movers when low interest rates made building condos an attractive proposition.

"My overall sense is they feel that the condo boom is going to continue for quite some time," he said.

The main driver of the boom is low interest rates, which appear to be here for a while. But he adds that the builders are taking steps to mitigate their risk in the event that the momentum shifts.

"Most of their projects are going to be long complete before we ever have any kind of a crisis – if there is going to be a crisis."

James Ritchie, for one, appeared quite unruffled as he sat in the downtown Toronto conference room and gestured at the view from the 16th floor.

"Look at the cranes," he said. "Those are a couple of our cranes over there."

All eyes turned towards the rigs hoisting materials on behalf of giant Tridel Corp., where Mr. Ritchie is senior vice-president of sales and marketing.

"We really are the hot spot in North America," he said of the hectic pace of construction in Toronto.

Mr. Ritchie summed up the mood of investors as "skittish."

The pace of building, combined with speculation in the media about a possible bubble, is undermining consumer confidence, he added.

Mr. Ritchie does not believe there's a bubble. Yes, prices have jumped, but year-over-year increases of 7 or 8 per cent don't worry him. Back in the late 1980s, he pointed out, speculation was rampant and the average price spiked 20 per cent one year and 40 per cent the next.

Canderel Group is racing to build Canada's tallest residential building with its 78-storey tower called Aura. Canderel executive vice-president Ben Rogowski said that, inevitably, many of the people buying units in the skyscraper at Yonge and Gerrard streets are investors, but he doesn't see a problem with that.

"I know there's a lot of concern but these investors all want to make money," Mr. Rogowski said.

Mr. Rogowski hasn't seen rampant flipping or other signs of speculation, and he notes that the investors have no problem renting out their units. They're closing on deals and making healthy deposits, he added.

Similarly, overseas buyers don't worry Mr. Rogowski. The pace of building in Toronto is not as intense as it was in Vancouver and Calgary when foreign buyers drove up those markets in 2007 and 2008, he added.

Prof. Andrew says he finds it fascinating that the developers themselves don't have a handle on the percentage.

"The truth is, they don't have a clue. They don't survey that," he said.

He adds that even the buyers who show their Canadian identification at the sales office may have power of attorney to act on behalf of someone outside the country.

But Prof. Andrew considers the questions surrounding the proportion of foreign buyers to be a red herring. He says many overseas investors pay in cash, which helps to lower the risk in the market.

He is more worried about young, first-time buyers who are taking on much more debt than they can handle if interest rates are significantly higher when they renew the mortgages on their units in the coming years.

"Domestic investors are the worst because they tend to borrow as much as they can and they'll be the first to dump them when interest rates go up."

Mr. Ritchie said Tridel does a good job of shutting out first-time buyers. The company has been demanding a deposit of 20 per cent, which is hard for a first-time buyer to scrape up. But, as risk increases, they want as much as a 35-per-cent deposit – just in case the market turns sour and buyers decide to walk away.

He believes speculation about the number of foreign buyers is overblown but acknowledges there is a risk when investors are overseas.

"If somebody buys and they're in Nigeria, how the heck are we going to deal with that – aside from the deposit we have," Mr. Ritchie said.

Remo Agostino, director of development at Daniels Corp., said he still sees an opportunity to build more projects – in emerging downtowns such as Vaughan and Markham – and especially along transportation corridors.

He thinks one of the biggest problems is figuring out how to make housing affordable as land and construction costs rise. The buyers are out there, as evidenced by the lineups that form outside the sales offices when Daniels launches new projects.

"It really is a social phenomenon when we go on sale," he said.

Mr. Agostino said the company has experimented with a rent-to-own concept at Bayview and Sheppard avenues as one way to help buyers overcome the hurdle of affordability.

"It's getting creative in the marketplace," he said.

For the lenders' viewpoint, the panel had Steve Sagro, senior manager of real estate at Laurentian Bank. He predicted that things will slow down over the next year or two. Eventually interest rates will rise, he said, and already bankers are scrutinizing deals carefully and becoming more selective about to whom they are lending money.

Mr. Rogowski said he doesn't know if the real estate market will suffer a drop in Toronto, but if it does, he believes the catalyst will be an external shock.

"It will be somewhere else in the world and everyone will suffer, including us," he said.

Mr. Ritchie summed up the outlook succinctly: "Nobody can predict it. No one's ever predicted it correctly."

UPDATE: Bernie and Alison Doyle, the couple we profiled two weeks ago who had set out to sell their home without an agent, just signed off on a deal to sell 673 Willard Ave. for $595,000. Mr. Doyle reports that they received three bids after listing the house on PropertyGuys.com with an asking price of $575,000. More details next week. 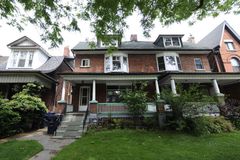 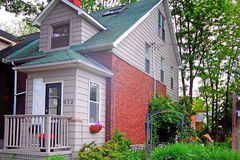 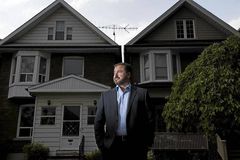