A new five-storey laneway apartment building in Vancouver’s Commercial Drive neighbourhood offers a glimpse into the future of density in the city, while also raising questions about who exactly density is for in Vancouver.

The development, designed by Cornerstone Architecture, is around a month from completion and soon to go on the rental market. Its uniqueness lies in its height and location at the backend of a larger property, much like a laneway house, which architect Scott Kennedy quipped about on Twitter.

This is our 5 storey version of a laneway house on a 33’ corner lot. 8 suites. Heritage building in front preserved. Unfortunately not a passive house pic.twitter.com/Ycxb3mtVad

The infill development has four one-bedroom units and four two-bedroom units spread over four floors, in addition to a ground floor serving as a lobby area. The building was also developed under heritage requirements, which necessitated preserving the heritage building at the front end of the property. Cornerstone architect Luke Han, who worked closely on the project, says he had to get creative with the tight property lines in order to fit all eight units on the 9,560-square-foot site, although they were able to receive a slight exemption to the height limit.

From the city’s perspective, the compromises were worth it because of the large incentive to secure market rentals along Commercial Drive, a highly sought-after neighbourhood in Vancouver. City of Vancouver director of development services Andrea Law believes this type of development is indicative of the direction that the city hopes to pursue.

However, while the building, which is located at 1102 Commercial Drive, does increase the number of rental units available in a competitive part of the city, there are concerns as to who the target renter is.

“It’s unclear to me who the units are for,” says Lisa Moffatt, an urban planner and owner of the consulting firm Resilience Planning who lives in the neighbourhood. While she appreciates that the development activates an underutilized laneway, she points out that the units are market rentals, meaning that a large segment of Vancouver will be unable to afford them, an exclusion that particularly affects marginalized groups.

Vancouver’s 10-year housing plan, approved in 2017, set out a goal of having 50 per cent of new homes being affordable for family households earning under $80,000. Affordability in Vancouver is defined as spending less than 30 per cent of one’s income before taxes on rent, meaning that a household earning $80,000 a year would pay at most $2,000 a month.

However, Vancouver’s 2020 progress report on its housing plan shows that the city is far behind its affordability goals. In 2019, Vancouver built just 61 below-market rental units, short of its goal of 400. In the three years since the plan was approved, only 34 per cent of approved homes have been affordable to incomes below $80,000.

The units being sold at market price is one reason Ms. Moffatt is critical of the development, but she believes the conversation should be more focused around challenging what planners mean when they talk about density.

“I think we keep asking the wrong question in the density-slash-affordability conversations,” she says. “What is the problem we’re trying to address with density? It’s unclear. Is it to provide more housing or affordable housing? Providing more density is like a Band Aid; it doesn’t get to the root causes of what made housing unaffordable.”

She says that rather than just saturating the market to address affordability, it would be more effective to take an intersectional approach to planning. Current mainstream discussions around density ignore social determinants of health, income, race and disability, which effectively exclude large segments of Vancouver’s population and heighten the housing crisis, Ms. Moffatt says.

For instance, Vancouver’s housing report recognizes that Indigenous peoples in the city are disproportionately affected by the housing crisis and includes pledges to rectify the issue. However, Ms. Moffatt says she has yet to see any tangible progress.

“Vancouver made a commitment to reconciliation several years ago,” she says. “That needs to be taken into consideration where housing is concerned and recognizing that we are all operating on stolen land.”

Vancouver’s 2019 housing report also found that the number of unsheltered homeless people in the city increased in the year prior by 122 people, with 40 per cent of the population identifying as Indigenous. Indigenous peoples only account for 2.2 per cent of Vancouver’s wider population.

“When we talk about density, what I wonder is, what does a decolonial approach to density look like, and why are we not asking that question?” Ms. Moffatt says.

Like Ms. Moffatt, Mr. Kennedy also has concerns around discussions of density, as he cautions against approaching it as the solution to rising house prices.

A better future for density could look like gentler developments or densifications in the lanes behind commercials streets, Mr. Kennedy says. In either case, his firm’s new development could act as a model for future developments.

These pressures around densification are not lost on the city, Ms. Law says, and discussions around it are always evolving at the municipal level around how to better support communities and neighbourhoods experiencing change.

At the end of it all, any conversation around housing in Vancouver must be about listening to the needs of the community and looking at how those needs can best be met.

“It’s really about balancing the tradeoffs,” she says.

While this new development is a fairly simple project and in fact is under the maximum allowable density, it is notable because of the role it plays in Vancouver’s larger plans for increasing density.

As Vancouver moves forward with its plan to dramatically increase the number of units available to residents of all incomes, its laneways may soon be seeing more of these types of developments accompanied by more questions around what density means. 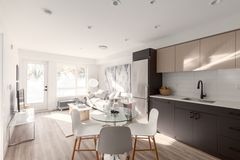 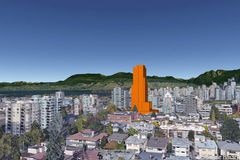 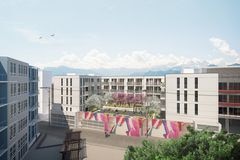 Follow Josie Kao on Twitter @josie_k_
Report an error Editorial code of conduct
Due to technical reasons, we have temporarily removed commenting from our articles. We hope to have this fixed soon. Thank you for your patience. If you are looking to give feedback on our new site, please send it along to feedback@globeandmail.com. If you want to write a letter to the editor, please forward to letters@globeandmail.com.
Comments