Realtor Krystian Thomas came from Warsaw as a kid in 1993 and his family of four shared a one-bedroom apartment on the east side of Vancouver.

Six years later, his single mother moved the family into a subsidized townhouse in the Coal Harbour Housing Co-Op in the tony downtown community of Coal Harbour, and Mr. Thomas had his own room for the first time in a long time. After high school, he got a job at a West End coffee shop, where he would ask people what they did for a living and how they got their jobs.

“I’m a product of social housing,” says Mr. Thomas, who became a realtor after meeting agents who’d come into the coffee shop. "My life changed because I finally had my own space – I had privacy for the first time in forever. I was surrounded by people like me who sometimes were on welfare, and my mom worked super hard, and somehow she did better with her money and yet she made very little of it.

“And I was also surrounded by nice restaurants, by people who had it made … I was able to go, ‘I want that. What can I do to achieve that?’”

Today, he strongly believes that social housing, including co-ops that offer subsidies, should be built in every neighbourhood of the city to ensure demographic diversity, which benefits everyone.

“I lived a very stressful upbringing. … But my location helped me discover things and talk to people that I would never have talked to, and get ideas. It started with the neighbourhood.”

Mr. Thomas’s real estate agency, the Stonehouse Team, specializes in the Strathcona neighbourhood, which has been in the news lately because of an adjacent encampment of homeless people at Strathcona Park. Residents groups argue that housing people in tents, especially in cold weather, isn’t serving citizens inside or outside the camp. Police have reported increased crime and acts of violence, which have trickled out to the surrounding neighbourhood.

People who are observing the situation firsthand say the government must step in and immediately house the people most at risk. And in the long term, government needs to find ways to equally distribute social housing across the city, and make neighbourhoods more diverse than they are.

In response to the crime and disorder, some people have put their houses on the market, Mr. Thomas says. But others are still confident that the situation is temporary, and are drawn to the community, which is small and distinguished by historic houses and stores, like a village within a city.

“People are leaving, however we are still selling detached homes and townhouses, and in multiple offers,” he says. “So for that one person that leaves, there are still three or four people waiting to get their foot in the door and live in this neighbourhood.”

Mr. Thomas is pleased to see a rezoning application for a vacant lot at 1015 East Hastings St., in Strathcona, for a plan to build two 14-storey residential buildings, including 138 rental units of social housing, 25 units of transitional housing and an 80-bed shelter. But he’d also like to see more of this type of housing throughout the city.

Katie Lewis agrees. Ms. Lewis is the vice-president of the Strathcona Residents Association and she is concerned that crime is driving residents away. An unidentified assailant came up behind her and knocked Ms. Lewis unconscious outside her home three weeks ago. The police are still investigating the assault, which left her with a concussion.

“I know of a number of people that have been selling their houses and putting them on the market. From the residents association’s position, that’s really sad for us, because we want to keep people in Strathcona.”

More social housing, and a more equal distribution of it around the city, is part of the answer, she says.

“If you look at East Van compared to every other neighbourhood, we have a huge percentage of the social housing in the city, and I do believe that it’s time we spread some of this out to other neighbourhoods as well. One community cannot bear it all.”

The question, of course, is how to supply that housing. Urban planner Margaret Eberle says a quick remedy would involve governments buying up older purpose-built rental buildings and converting them to nonmarket housing. Ms. Eberle helped conduct the first homeless count for B.C. about 20 years ago. Removing old purpose-built rentals from the market helps protect against so-called “reno-victions,” she says.

“They are not cheap, unfortunately. But it’s definitely happened in the past.”

Mayor Kennedy Stewart last week announced the City has received $51.5-million from the federal government as part of a partnership with the Canada Mortgage and Housing Corporation’s Rapid Housing Initiative. The City also recently kicked in $30-million, and in a press release, Mr. Stewart called on the province to also step up with funding for social services.

In an interview, Mr. Stewart said there seems to be more interest lately from Ottawa in the support of co-ops.

He also said his proposal for a pilot program to rezone detached house areas to allow up to six units on a single lot, dubbed Making Home, could possibly have offered “mini co-ops.” Council voted to defer consideration of the matter to spring, after staff review.

“Every neighbourhood should have a mix of incomes essentially, and the city strayed away from this for a long time,” Mr. Stewart said. “It’s very difficult in Vancouver where 99 per cent of the value of residential properties are in private hands. You need more social housing. I would say if we had 20 per cent of the housing being public we would be in much better shape here.”

Jamie Maclaren, a lawyer who lives in Strathcona, is part of a movement that got a lot of media attention for calling on residents to defer property taxes this year. He couldn’t say how many homeowners did defer, but he says it was mostly a symbolic gesture, a call for health and safety resources proportionate to the neighbourhood’s needs. The group, Strathcona Stands for Safe Homes for All, also aims to apply pressure on government to provide secure housing for the homeless.

Strathcona has a history of being neglected and sidelined compared to the rest of the city, he says. It’s also got a history of fighting back, such as when city council voted against plans to build a freeway through neighbouring Chinatown 53 years ago, after tremendous public protest. The plan came along at the same time as a North American urban renewal strategy that saw some of the poorest neighbourhoods razed and rebuilt. Chinatown and Strathcona citizens fought hard to save their community.

“There’s a feeling in this neighbourhood that goes back decades, that it doesn’t receive its fair share of services and support, that it’s a politically expedient place to park social issues,” Mr. Maclaren says. 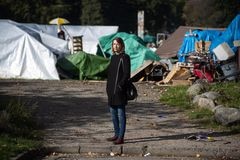 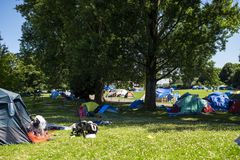 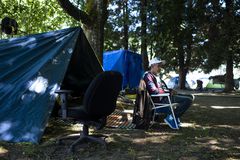