Cressey Development Group entered the pandemic looking down the barrel of a scheduled June 1 occupancy date for its Conrad rental complex on the east side of Vancouver. Under physical distancing conditions, they had to fill 115 units.

It had taken Cressey seven years to develop the two attached rental buildings at 1771 E. 18th Ave., near Trout Lake. The project had been in the news because it was born out of a Canadian Mortgage and Housing Corp. loan program that offered a low interest rate with attractive terms for construction of purpose-built rental homes. The federal government loaned the developer $40.2-million.

The idea behind the Rental Construction Financing program is to incentivize the building of housing for people who had been pushed out of expensive rental markets. There are below-market rent caps on the units, but when the units turn over, the caps are lifted and the rents can go to current market rates, said Cressey vice-president of asset management, Tom Johnston. On Padmapper, a 412-square-foot one bedroom at the Conrad is listed for $1,750, and a 781-square-foot three bedroom for $2,640.

By the end of May, the company had rented out 80 units in 30 days, according to Mr. Johnston. All studio units had been snapped up, about 85 per cent of one-bedrooms were rented, and more than 50 per cent of the two-bedroom apartments had been spoken for.

The two- and three-bedrooms are proving to be the hardest to sell, leading the company to the conclusion that families may not be as keen on renting in the city as City Hall might believe. City policy requires new residential projects that have undergone rezoning to include family-sized units. In addition to less interest from families, there seem to be fewer renters willing to live with roommates.

“Really, an indication of where the demand is today is that the Vancouver rental market is driven more by people in the service industry than it is by families,” Mr. Johnston said. “It’s just a more complete living experience to raise your kids outside of Vancouver than it is right within Vancouver.

“And frankly, had the city allowed us to build the whole complex as studios we would be 100-per-cent rented right now, and we’d be meeting the market demand.”

Cressey is better known in the Lower Mainland as a prolific condominium developer with hundreds of buildings in its portfolio. But the company has also developed office, retail and residential rental, as owner of about 4,000 rental apartments in the Lower Mainland. The company has been around half a century and, like most of the industry, is keen to get the real estate machine back into full operation – but with less government interference. Sales of new product had already slowed throughout 2018 and 2019, and COVID-19 has slowed sales further.

Mr. Johnston says that Cressey’s vacancy rate – not including its properties that are dependent on University of B.C. students – hasn’t changed much since last year.

“We are under 1-per-cent vacancy, when I take the UBC situation out of it.”

He declined to say what the vacancy rate at UBC would be, but the number isn’t significant, other than a useful indicator that the international student market for housing has softened.

Mr. Johnston credits the industry’s rather unscathed situation on the provincial government for acting fast with a rent supplement program of $300 for individuals and $500 for renters with children. About 10 per cent to 15 per cent of his tenants applied for the program, and he guesses it will have served its purpose as people are called back to work by summer. The construction of rental properties became more popular as the investor market softened in 2018 and 2019, and municipalities started offering incentives. Rentals, Mr. Johnston says, are seen as long-term, safe investments that offer a way to “recession proof” a company and diversify a portfolio.

Mr. Johnston says he’s more concerned about increased costs and bureaucratic red tape that slow the development of more housing. He says that the busy first three months of this year was strong indication the market was about to get back into full swing, and that there is still plenty of demand in the Lower Mainland.

Indeed, in West Vancouver, Denna Homes said this week that it has managed to sell 66 of the 122 new units in its 26-storey Sentinel, near Park Royal, just in the last month. In a news release, the company claimed it was the fastest-selling project in Metro Vancouver since the pandemic struck. It released the remainder of the units for sale last week.

Considering the political strife in Hong Kong, and the fact that a reported 300,000 citizens in that city carry Canadian passports, Mr. Johnston believes Vancouver could see future demand.

Mr. Johnston is aware that developers in Vancouver are often criticized for maximizing profits, especially in 2016, when investors and speculators drove the presale market. But he argues that between 2008 and 2018, condo owners provided about 75 per cent of new rental product.

The bigger concern for the company at this juncture is the rent controls, time delays and costs of bureaucratic red tape that are inhibiting its ability to build more housing, both rental and ownership types. Mr. Johnston said that while land and construction costs are high, and not easily controlled, government policies can be controlled, and should adjust to allow for a quicker development process that would trim some of the costs. He said the company hasn’t purchased land for a rental project in about three years because of high costs. He believes that smaller developers won’t build rental because the upfront costs are so high and it takes a couple of decades to see a proper return.

Mr. Johnston said the rent cap of around 2.6 per cent a year is a major obstacle that isn’t in keeping with rising operating costs. Those rising costs are insurance, water, sewer and property taxes. Until 2018, landlords could raise rents by the cost of inflation plus 2 per cent, which would have made the allowable rent increase this year 4.6 per cent. Rent increases are on hold, however, throughout the crisis.

Like several other B.C. developers, Cressey has also built in Seattle, where they’ve found the process easier. In that city, landlords have to give tenants extra notice if they plan on increasing rents more than 10 per cent.

“The Seattle market doesn’t have the same rent control and rent restrictions we have here, and as a result there is the ability for far more product to be built. And it really is much closer to being a free market down there. There are inducements to get people to move into units as vacancy levels rise, and as vacancy levels drop there is an incentive to build more units. So the market in Seattle works quite freely.”

He estimates the Seattle approvals process is about a third of the time of the Vancouver process.

“If the rent controls or rent restrictions or constraints are too onerous then you won’t build.

“Capital is portable, the money can be invested in U.S. markets instead of here. And a number of the local developers here are very actively building much more today than two years ago in the U.S. And we desperately need that money back here, to create jobs and to create housing.

“Unless the pipeline is kept full with new product being built, we will have a problem housing the people that want to live here.”

Long-time realtor Patricia Houlihan, who is also a lawyer, thinks that condo and townhouse developers might be having a hard time selling the product they already have in the pipeline. In North Vancouver, she’s seeing a lot of unsold new units, and she’s been getting e-mails about new properties that haven’t yet sold, which she called “unusual.”

“It seems to me that there is a lot of product sitting there.”

She believes that the pandemic is having an impact on the multifamily market. A client recently sold his condo because he wanted outdoor space. For those who can afford it, she thinks there will be a shift away from condos.

“People want a garden, and more space for the second wave. I personally think the condo market is in for a very big hit.”

Ms. Houlihan and her colleagues have seen a spike in sales in the past couple of weeks. She attributes it to the easing up of lockdown restrictions, the low interest rates and people wanting a new sense of security that they might find in owning. She sold two properties over asking with multiple offers, one at about $3.5-million and another at $1.6-million. She has other listings that had been sitting on the market for months, and she’s now getting calls on them.

“Basically in my experience, and from the others I’ve spoken to, it was completely dead for six to eight weeks, and now it’s crazy. I think COVID may change the way that people look at housing.”

The pandemic could reshape how – and where – Vancouver works
May 22, 2020
Critics say Vancouver needs to recalibrate its housing strategy
May 13, 2020 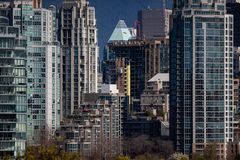