The low point in Phase 2 of the Ironman slog to build our infill house for my husband’s daughter and her family came when my patient architect let me know the people at city hall were suggesting we might have to decommission our existing basement suite.

That suite, where daughter No. 2 was living, would need to have the stove removed and stairs to the main floor put back in if we wanted to avoid the city requiring us to build in two enclosed parking spaces into the ground floor of the laneway.

That suggestion quietly floated away after a few weeks.

But it was one of several stomach-lurching dips in the roller coaster that we, inexperienced homeowners, went through during the year-long phase that comes before you ever apply for your development and building permits. It’s a year of long negotiations that precedes the second nearly-year-long wait between official application and actual granting of permits.

Of course, by spring of 2017, 16 months since we had written the first $10,000 cheque for a down payment on the future laneway, we still hadn’t even quite reached the pre-application stage.

All progress at city hall had stalled for our project – and all others in our neighbourhood – because a senior planner had apparently decided there was something wrong with the existing process of approving laneway houses in our area.

So my husband’s daughter, her husband, toddler and now new baby were living in an 850-square-foot second-floor apartment in Kitsilano. Brad, Ariel, Kajsa and Maeve’s stuff was piled along the walls and in the hallways. They were paying almost $2,000 a month for that space while we waited and hoped.

Ariel told me later they started to wonder if it would ever happen. “For a while, I almost gave up hope. I even applied to a co-op as a back-up plan.”

City planners had at first started telling the neighbourhood the previous spring that new rules were coming in to regulate “infills” in our particular zone, which were then done with case-by-case agreements for properties where owners were promising to preserve an older house in exchange for the infill permission.

Then we heard in early January that, instead of revised rules for the old process, the city was instead going to do a complete revamp of the zoning to standardize everything.

This additional delay is a not-atypical part of development in high-growth cities, as politicians and planners decide that whole areas should be rethought in order to figure out where density goes.

It’s the kind of rethinking and rezoning that seems entirely reasonable in the abstract but, for people in our neighbourhood who already had spent many months on the original process for laneways and now had projects on hold, it felt like some special new form of torment – and expense.

Our area was also caught up in a citywide effort to figure out how to save older homes in general as residents were raising more and more objections to demolitions.

So city planners were looking at incentives for infill houses everywhere, allowing them to be larger and, under the right conditions, allowing them to be stratified – a legal process for selling off parcels of housing on lots where subdivision isn’t allowed – in exchange for people preserving their existing older houses.

It was controversial in some zones. But in our east-side neighbourhood, a lot of owners turned out to ask for maximum density for the infills.

Years ago, the Vancouver standard used to be that a house’s square footage could equal only 60 per cent of the total lot square footage. That meant 2,400 square feet for our 33-foot-by-122-foot lot – about what we had in the existing house.

Several years ago, the limit was raised to 70 per cent or 0.7 floor space ratio (FSR), in planner lingo. Now, they were talking about raising the limit to 80 per cent or 90 per cent for people building infills. That meant as much as 800 to 1,200 extra square feet for a second house on a lot in a city where new homes can sell for $1,000 a square foot. Those space differences are hugely important when you’re trying to build something big enough for a family.

By October, 2017, the new zoning for our area was approved at council, with a limit up to 0.85 FSR. It wasn’t going to come into effect until January, 2018. But we could crank up our application again.

My builder, Jake Fry of Smallworks Ltd., assigned our project a new architect, Jennifer Uegama, to steer us through what was still likely to be a complicated process.

Any time new zoning rules come in, Jake told us in various conversations, the planners and permit-issuers get cautious, worried they’ll make a mistake and set a precedent that can’t be rolled back. (And get them in trouble with their managers.)

So Jennifer took the basic outline of the original plan that had been worked out two years earlier and, from October, 2017, to July, 2018, finessed the interior layout to maximize the usable space, worked with my stepdaughter on design, and then diplomatically made her way through all the departments and new policy. (Because I am a reporter and cover city hall, I stayed out of sight as much as possible through the whole process.)

Interdepartmental politics erupted at times. Engineering wanted the enclosed garage to be on the east side because of their concerns about the car-turning radius in the alley to the garage.

But that would mean taking down a beautiful, large maple tree on the east side of the yard because the house was longer on the garage side, with a notched-out entryway, than the non-garage side.

We, and the landscaping department, wanted to save the tree. That meant putting the garage and longer side of the house on the west. Jennifer had to politely ask the two departments to arm-wrestle and figure it out, a process that took a couple of weeks.

The landscaping people won – something I would discover was becoming the rule at city hall.

Other bumps were almost comical.

One time, Jennifer showed up with her tape measure, saying that whomever she was working with at city hall thought the storage areas under the back and front porches would have to be calculated as part of our floor-space ratio. Spaces that had no proper foundation and that you couldn’t stand up in. But if they counted, we’d have to lower the ceiling or punch a hole in the exterior wall to ensure they didn’t count.

Another time, she was told the size of the laneway house was fine but our existing house was 40 square feet over the limit. So she was remeasuring everything to see if any of the space could be legally excluded.

Then there was the “you might have to take out your basement suite if you don’t want to have to provide parking for two cars” episode.

In the end, all those crazy-making requests disappeared. Jennifer worked through the four-page single-spaced list of required changes needed before submitting the application (a list that sounded daunting but at least, she said, we got a city project co-ordinator who responded instantly, unlike a colleague of hers who only got a page but could never get hold of the manager). And we got basically the same size house (1,040 square feet plus garage) as what had been mapped out two years earlier.

I assumed that our builder Jake, who is well known at city hall, was quietly at work to ensure that logic prevailed. It’s one of the reasons I’d gone with his company. (Yes, he said later, he was, quietly asking “Is that really necessary?” when needed.)

Jennifer submitted our official development-permit application July 24, 2019. A mere 174 days later, on Jan. 14, 2020, we got both our development permit and building permits at the same time.

We were ready to start building with no obvious problems on the horizon. Rumours of some strange flu-like epidemic in China were barely penetrating our consciousness. 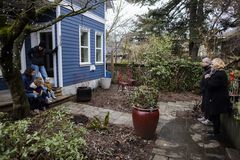