Encouraged by big demand and new market conditions, Vancouver developers are moving more noticeably into the rental market than ever before. That’s not to say it’s easy, but it’s a new day for the purpose-built rental market.

Westbank Corp., famous for condo development, is getting in on the action. The developer got its new residential leasing division, Westbank Living, up and running about five months ago, marketing director Michael Braun says. Now, the company is seriously ramping up its rental portfolio, with more than 7,000 Vancouver market rental units coming online in the next few years.

“We are really gung-ho on rental,” Mr. Braun said in a phone interview. “Part of it is an economic thing, hedging our risk. We don’t want to focus solely on the condo market – if something happens to that market, then all your eggs are in one basket. So, from our perspective, it was a business decision.

“Also, in the case of some of our sites, those particular landowners were interested in doing rental projects … some are interested in creating a long-term income piece.”

Westbank has two downtown rental properties that just opened, including 1770 Pendrell, on Pendrell Street, off Denman Street in the West End. The Japanese-inspired 173-unit building appeals to a millennial demographic, with a gym, public art installation, Modo car share, electrical vehicle charging stations, pet washing station and an on-site building manager. Rents for a one-bedroom start at around $1,850 a month and go as high as $6,000 for a three-bedroom penthouse. Their other rental building is next to Westbank’s famous twisting condo skyscraper, Vancouver House. The high-end 106-unit mid-rise rental building is designed to blend in with the tower and includes furnished studios, one-bedrooms and two-bedrooms. Rents range from $1,800 to $3,900. It only opened two weeks ago and it’s already 70-per-cent rented, Mr. Braun said. He expects it to be completely rented in a few weeks. The biggest demand is for the one-bedrooms.

Also, because they aren’t yet at capacity, the company is willing to do short-term stays of more than a month. However, he says at least 90 per cent of renters so far have signed up for one-year leases. The demographic of renters runs the gamut, but is not typically families.

“It’s everyone from a young professional to someone who got kicked out of his house because he’s divorced,” he said. “It’s just the whole subset of society I would say.”

As for who can afford the rents, Mr. Braun said the impending arrival of thousands of new higher income tech workers to the market is incentivizing rental development. Although Westbank Living isn’t targeting tech workers, they are looking to the industries that service the tech industry, including lawyers and accountants.

Westbank has another 330-unit building opening on Davie Street, as well as upcoming rentals at West Broadway and Alma Street, 62 market rate units in Blood Alley Square next year and the 6,000 units that will be built as part of the Senakw development, in partnership with the Squamish nation.

Mr. Braun says the low interest rate is another key incentive, making the financing more affordable for investors. As well, community amenity contributions (CACs) that are required for any rezoned condo project have escalated in recent years. Rental projects don’t require CACs, which is also a plus.

“The thing is, for the first time you are seeing people pay attention to rental. You market condos heavily, so you shove them in front of people’s faces. Because the rental vacancy rate is 1 per cent, you don’t have to be out there. So there are lots of rental buildings built, but they don’t have $20-million in marketing promotion behind them.

“Also, not to sound too self-serving, but I find that a building like what we are doing at Pendrell or Vancouver House, is a cooler rental building. So you are also noticing the excitement that comes from neater looking buildings, because typically if you were to put a rental building next to a condo building, it’s glaringly obvious which is rental. You couldn’t tell which part of Vancouver House is condo and which is rental.”

Several major Vancouver developers have been building residential rental projects in Seattle and Toronto in recent years, where the numbers have made more sense. Mr. Braun said Westbank Living is adding many more rental units to its growing leasing portfolio in Calgary, Toronto and Seattle markets.

And there are those, such as Westbank, who are either diversifying or ramping it up in Vancouver. PC Urban, better known for industrial development, is launching hundreds of rental units and principal Brent Sawchyn says the company has plans to do more. The company’s new purpose-built rental project in Port Moody, B.C., accessible by SkyTrain, will likely appeal to those new tech workers arriving in the region.

“With the emergence of IT and tech, and the way that we have encouraged immigration, I think that in Vancouver we are seeing the tip of the iceberg,” Mr. Sawchyn said.

Developers say that rental can be a challenge, but to varying degrees. Some say it’s not easy, but it’s doable; others aren’t yet convinced it’s economically viable.

PCI Developments just got approved for two 14-storey rental projects on East Hastings Street, under the city’s moderate income rental housing pilot program. The program waives standard development levies in exchange for all-rental buildings, with 20 per cent of floor space reserved for those with average incomes.

Jarvis Rouillard, PCI vice-president, acquisitions and leasing, says that his company will continue to be “long-term bullish” in the Vancouver rental market.

“We are looking to build more purpose-built rentals to support a lot of the tech bros here,” Mr. Rouillard said. “It is not perfect, there are regulations that keep being brought in by multiple levels of government that really squeeze any type of investment into rental product. But you know, you just look at the supply/demand dynamics and you have to find a way to build supply and work with the city and municipalities to figure out the problems and work out the kinks.

“They all compound with each other to create a very uncertain environment for investing in rentals.”

Local private developer Conwest, which also builds commercial and industrial, built a purpose-built rental building at Knight Street and East 15th Street a few years ago, but chief operating officer Ben Taddei is cautious about doing more in the current climate. He said there are too many roadblocks, such as government regulations.

“I understand all levels of government’s goals, to deliver rental, but they aren’t making it easy. The returns aren’t there,” Mr. Taddei said. “People need to remember that capital needs to earn a return. If you do everything to either eliminate or minimize that return, it goes somewhere else.”

Mr. Taddei sees two major issues in the way of rental supply. A rent control of 2.5 per cent a year suppresses supply because it doesn’t align with inflation, he says.

Vancouver city Councillor Jean Swanson’s proposal to control rents further by limiting the amount the rent can increase once a unit is vacated will make the situation worse, he said. Currently, a landlord can raise the rent to market rate when a tenant vacates.

“We have no control over electricity or gas, and look at what’s going on with insurance right now. So the first big move is to get rid of these rent controls on new housing, because the reality is that housing is a continuum and you have very affordable housing on one end, and on the other end of the spectrum you have high-end market housing and then everything in between.”

The other issue is that many families who own three-storey walk-up apartments on under-utilized land are refusing to sell because they will pay capital gains. Government needs to change tax policy to incentivize those landlords to sell so that developers can redevelop a low rise into a high-rise, Mr. Taddei said.

“And then there is a multiplier effect on the economy, creating jobs and turning dollars, which is another benefit. You could have everything that everybody needs if there is the political will to try something new.”

Mr. Braun said that for his company, construction costs are more of a challenge than government rent controls, at least for new construction.

“No, I don’t think that [rent control] is an issue, because you start off at market rents when you have a new building,” he said.

“What’s really hard in Vancouver still is that even though land prices aren’t escalating like they were anymore, the hard cost of construction has gone up so much. Back in the day, you would build the building for $225 a hard cost a square foot, and you’re lucky if you can be a hair under $400 nowadays.

“Rental buildings are costing about $800 a square foot once you’ve built it, with your architect fees and all that, all in. The biggest impediment to doing rental is the cost.”

It’s either golf or housing - not both - in this Vancouver neighbourhood
Subscriber content
March 13, 2020 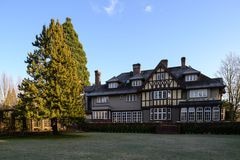