Farmer John Boks just harvested crookneck squash, honey select corn and carrots that were planted by one of the residents at the emerging community of Creekside Mills, an “agrihood” in Cultus Lake, about 100 kilometres from Vancouver in B.C.'s Fraser Valley.

Mr. Boks and his family live on the farm, and although his work days are often long, it’s also seasonal. And his community is tight, with around 100 families so far who gratefully share in the bounty.

The merger of working farmland, organic food supply and healthy lifestyle as a new model of residential development has been playing out in the United States for the past couple of decades. Outside Phoenix, there is Agritopia; in Fulton County, Ga., there is Serenbe; and in Ashburn, Va., there is Willowsford, to name a few. In B.C., the concept is relatively new, although the ecovillage of Creekside Mills has been around for more than a decade. Yarrow Ecovillage in Chilliwack was a pioneer in combining shared living with farming, but that concept is built on co-housing and affordability, not market housing.

In B.C., market-housing communities had more often formed around golf courses, which are risky ventures that cost millions and have been criticized as being harmful to the environment. An organic farm, on the other hand, is a way of life that a lot of people can get behind — people who appreciate locally grown food, who want to teach their children where their food comes from, or who simply want a quieter life in the country, but without having to drive miles to talk to their neighbours.

In the midst of a pandemic, this way of life is proving even more desirable. Sales director Steven Van Geel, who is a member of the family-owned Frosst Creek Developments that owns Creekside, said in an e-mail that they just had a “record-setting summer for registration and sales.”

Another, much bigger agrihood, Southlands in Tsawwassen, just launched and is seeing brisk sales, too.

“Recreational agriculture, or farm-to-table community, or ‘agrihood’ can mean a lot of different things, and I think it does in different communities,” Mr. Boks says. “For our community, the biggest thing it means is relationship — not only with each other, but with the land. It brings people together as a community and it provides something for you other than just an aesthetic value.”

Mr. Boks started his job as facilities and agriculture manager at Creekside Mills in March. The agrihood is a 79-acre gated farming community that includes 10 acres of protected farm land and — when the four phases are built out — will include 129 detached houses. Phases one and two are sold out, and Frosst Creek has built 36 homes as part of the third phase, of which only eight remain unsold. Phase four will include another 23 houses, which are also for sale. About 70 per cent of the project is sold, by Mr. Boks’s estimate.

Mr. Boks is grateful for the opportunity to live and work at Creekside Mills. Each property backs onto the 10 acres designated as an Agricultural Land Reserve, which includes a young orchard. Mr. Boks’s accommodation is included as part of the job, in a house provided by the community. He has two part-time helpers and a garden committee made up of community volunteers who help pull weeds and sow seeds, and harvest the crops on the farm. Every couple of weeks they hold a market and give out the bounty, which is free to residents. Mr. Boks, whose background is in permaculture - design based on natural ecosystems, says he became a facilities manager in order to make a proper living in an expensive real estate environment.

“I’ve catered my career in the last five or six years to being in a facilities management type of role,” he says. “And one of the big reasons for that is coming out of Vancouver and looking at housing prices, I was looking for a way to provide for myself and soon-to-be growing family without breaking the bank. Being a facilities manager allows you to live on site, where your accommodations are paid for.”

Creekside Mills is a new farm, but Mr. Boks says one day it will turn a profit selling produce outside the community, which will go toward operating costs.

In the city of Delta, farmers Seann Dory and Suzy Keown have just begun their new job at Southlands community, which is a far larger agrihood developed by Century Group. It is located on the Boundary Bay shoreline, where they oversee 50 acres of newly improved farmland. The farm will eventually serve 950 homes and sell produce to the broader community, including restaurants. There is already a Prado Café on the site, which they are selling to.

The couple ran a farm on Vancouver Island but had to relocate after the owner sold the property. With a baby on the way, they needed to find a place to set up their Salt & Harrow farm business quickly, and they’d already been in touch with Century Group, so it worked out. They started their job as farm co-ordinators at Southlands, where they’ve planted the first crops. They are self-described “vegetable nerds,” growers who get excited when the annual seed catalogue arrives.

Two weeks ago, the developer held an open house at Southlands to showcase the new market district, which includes a well-known old red dairy barn, renovated and repurposed as a social space. Once built out, the central market district will include shops, restaurants and a commercial kitchen to learn how to cook.

“We had a pop-up market stall on the weekend and people kept coming up and saying, ‘we just bought in - we’ll be seeing you,’ ” Ms. Keown says. “There were a lot of young families and a lot of seniors. I think there is a lot of downsizing happening, especially in Tsawwassen.”

For agrihoods to work successfully, says Mr. Dory, having people with real farming experience is key.

“The only difference here is that you have access to the market — it’s at your doorstep."

Southlands — which sits between Boundary Bay in Tsawwassen and the U.S. border — has seen its share of controversy. The property was removed from the Agricultural Land Reserve in the 1980s and went through a series of development applications, including one for a proposed golf course that resulted in 1989 in the longest public development hearing in Canadian history. After much public protest, the proposal was rejected.

The land was purchased by the Hodgins family’s Century Group in 1990. George Hodgins, who founded the company in 1957, was already responsible for much of Tsawwassen’s early housing development, says Bob Ransford, vice-president of development for the company.

As development negotiations went on for years, the family leased it out to a couple of farmers who grew cattle feed.

As part of the deal, Century Group gave the city 425 acres of the 535-acre property, including 275 acres of agricultural reserve land and about 150 acres of forest and environmentally sensitive lowlands. They also paid for significant improvements to the farmland, which are prone to winter flooding.

“As part of being able to build this agricultural community, we realized we had to rectify the drainage and irrigation problem, so we gave Delta a cheque for $9-million and 80 per cent of the land,” Mr. Ransford says.

The company then leased back about 50 acres of farmland to be run by Mr. Dory and Ms. Keown.

Phase one of the project consists of 33 townhouses, and four single-family homes currently for sale. Another 18 townhouses are under construction and will be ready by the new year. An innovative eight-home cottage “pocket neighbourhood” that is under construction will be ready by Christmas. They will sell the homes, up to 1400 sq. ft., after they are constructed, Mr. Ransford says. The pocket neighbourhood, which emphasizes shared land and less square footage, is an idea that the developer had discovered several years ago while visiting Whidbey Island, Wash. They were keen to implement it.

“[Buyers] need to see something tangible; they need to understand the typology, and the quality,” Mr. Ransford says. "The first one is clustered around a common yard in the middle, and has a community food gathering area, with a pizza oven and outdoor fireplace, a common table, and growing boxes for herbs, stuff like that. The eight families that share can get together or bring in friends or whatever.

“Ironically, we planned all of this before COVID – and now we have a lot of things that really align with what people are looking for. This is a COVID [housing] model.”

In Cultus Lake, Mr. Boks is getting to know his new neighbours as they move in. There’s no pressure for them to be involved in the farming, but most people are really interested, he says. One of his resident volunteers is a biologist by profession. He helped with the abundant carrot crop.

Mr. Boks is seeing a mix of retired and semi-retired residents, but more often these days he’s seeing another demographic, too.

"Increasingly, we are seeing a lot of people come that have young families that now work from home. This is an opportunity for them to teach their kids what it’s like to live out in the country and to grow food and see where it comes from and have an attachment to the land. And with the new revolution of remote working, this [farm] is the perfect place to be.

“I don’t do sales. I’m employed by the [community], not the developer. But they are selling fast. It’s surprising how quickly it’s going. And a lot of people are coming out and saying, ‘this is going to be a safe place to be.’ ” 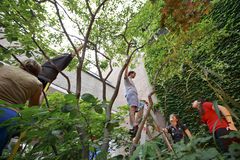