Little Mountain, the Vancouver housing project that has come to represent a shameful low point in the mistreatment of low-income renters, is finally seeing signs of new life.

Some 18 speakers appeared at a rezoning application hearing Tuesday, with a decision by council expected this coming Tuesday. This comes nine years after the 15-acre property was purchased, for an estimated $300-million. So far, the developer, Holborn, has only paid an undisclosed downpayment. Late last year, it held two public information sessions for a planned redevelopment.

The more than 600 low-income tenants who once lived at the East 37th Ave. were displaced when their 37 buildings and gardens were razed to the ground in 2009 and, despite the city’s housing affordability crisis and near-zero vacancy rate, the prime acreage has sat mostly empty for eight years.

After prolonged back and forth negotiations with the city, Holborn is now proposing to build about 1,400 market residential units, 282 social housing units, 37,000 square feet of retail and commercial space, a child-care centre, a community plaza and park. Buildings will range from three to 12 storeys, as part of the rezoning from multi-family to mixed use.

Several speakers Tuesday supported the project, including one young father who applauded the inclusion of family size condos – although it’s unknown what price range those units would fall into.

Another young man lamented the loss of a truly affordable housing complex.

“I grew up with a lot of the kids in the projects and the fact that that disappeared and the fact it’s not coming back is worrying. I expected more of it would be social housing, for the kinds of kids who are not rich and want to be part of the community.” 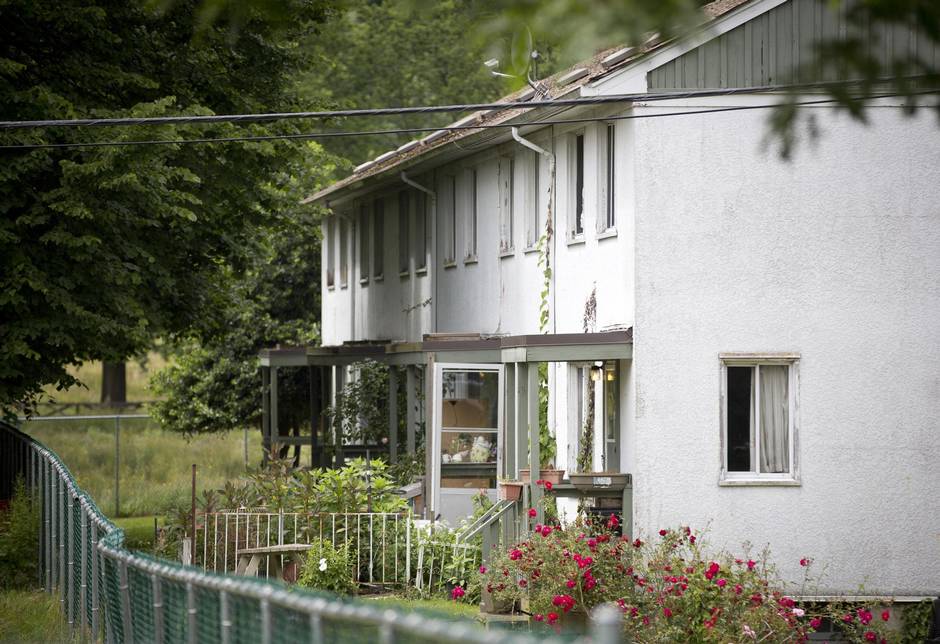 The last row of homes left at the Little Mountain site in Vancouver June 26, 2012. After the sale in 2008, a small group of tenants refused to leave. (John Lehmann/The Globe and Mail)

Riley Park South Cambie Community Visions’ Norm Dooley spoke on behalf of the group and voted against the proposal because of the density, building heights, the lack of affordable housing, and the protracted time frame of 10 years or more to build out. He referred to it as a “profit-driven project” initiated by the province.

“The community needs a new project that provides a range of housing options so that working people can enjoy our community … that builds a sense of community not an oasis of luxury condos.

“It comes in as a monstrosity of a project. Where is the affordable housing? This project needs to focus on the ability of working families to live in Vancouver.

“If you put together the cost of the land, the projected number of market housing units, factor in other costs, these will be extremely expensive market units.

Councillor Kerry Jang responded: “Essentially you’re saying had the province not tried to maximize their sale price, the form of the development and affordability of this project would be different?”

David Vaisbord, a filmmaker who lives down the street, has been documenting the players at the heart of the Little Mountain controversy since it began.

He thinks the city should push for a better deal, especially since land values have skyrocketed since 2008. He referred to the proposal as having “glaring shortcomings.”

“It’s very cagey. [The developer] is very smart. Holborn has waited for real estate in Vancouver to rise, and we are holding the bag for them,” he said over coffee one afternoon.

That the government chose to unload central, walkable, publicly owned land that had been used as social housing since 1954 is a matter of public-policy debate. It’s the way in which it was done that has caused so much controversy.

The transaction, including the terms and the purchase price, was not transparent. But it’s widely assumed that the province negotiated a deal with Holborn to sell them a vacant possession property, without the hassle of tenants. 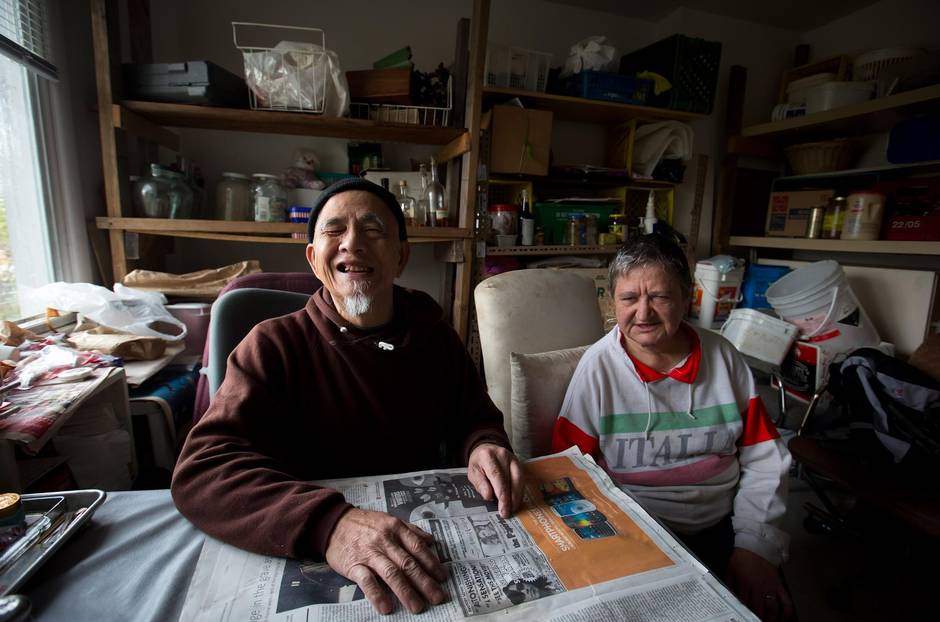 Sammy and Joan Chang, who were one of a handful of tenants who fought the eviction till the bitter end, didn't live to see the new building opened last year. (Darryl Dyck for The Globe and Mail)

“The fact is, they could have redeveloped the whole thing in a way that was ethical,” says Mr. Vaisbord. “Don’t tear it down until you’ve at least done your design. There’s no reason the whole thing shouldn’t be standing there right now.”

After the sale in 2008, the majority of tenants relocated to social-housing units around the city that BC Housing offered them. However, a small group of tenants refused to leave and stayed on in one building while buildings around them came down. They fought an eviction notice served to them in the summer of 2012. With media attention on their side, the group forced the city, province and developer to come up with a creative plan to subdivide the property and build a 53-unit social-housing replacement building. That small building went up a year ago, on one corner of the site.

Mr. Vaisbord says the original buildings didn’t need to be torn down.

“The only problem was, it was just ugly from the outside. But the units were sound.

“In my film you will see the units – the floors are beautiful softwood floors. The rooms had a clean coat of paint, sun from three sides, the kitchen is a big spotless, beautiful 1950s kitchen. Everything works. It was a beautiful place to live.”

He’s already released a short film about the story of an elderly, blind couple named Sammy and Joan Chang, who were one of a handful who fought the eviction till the bitter end. The couple stayed in their unit even when contractors boarded over the windows of their building, after the majority of families had moved out. Neither Sammy nor Joan, who’d lived at Little Mountain for more than 40 years, lived to see the new building that opened last year. And advocates maintain that like many of the former tenants, the stress of displacement contributed to their deaths.

Ingrid Steenhuisen grew up at the Little Mountain project. Her parents moved into the complex in 1957, three years after it was built, and resided alongside many other low-income families. Ms. Steenhuisen, who is on disability, lives with her mother in the one replacement building that is for seniors. Her rent went up $50 when she transferred into the building. At Tuesday’s hearing, she told council members that she missed her old neighbours at Little Mountain.

She has been an outspoken advocate for the residents of Little Mountain since the government first considered selling it off. 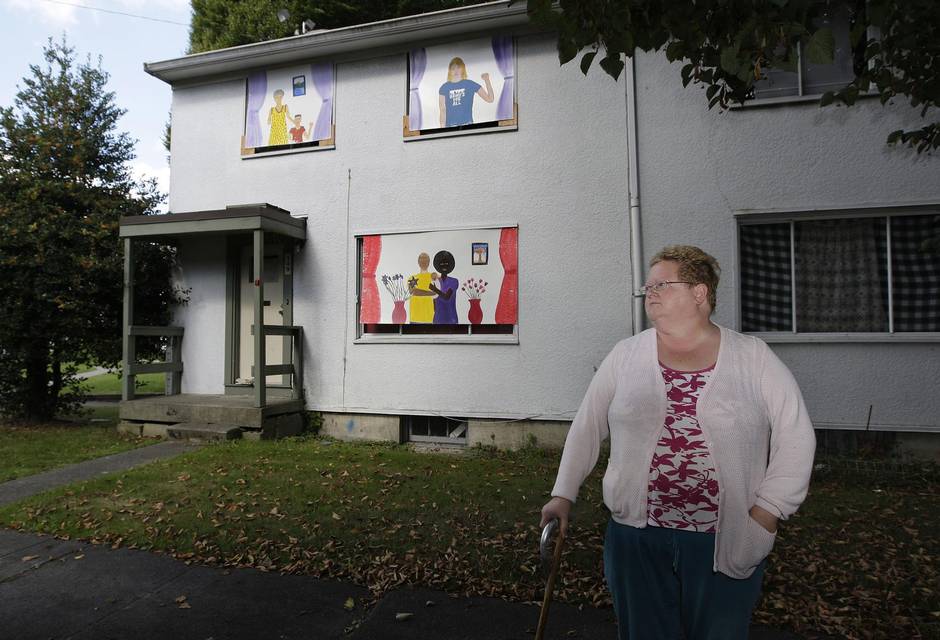 Ingrid Steenhuisen, who grew up at the Little Mountain project, stands near boarded up homes in Vancouver, Sept 20,2009. (Lyle Stafford for The Globe and Mail)

“More than 18 people have died, and not all seniors,” she says. “It’s the stress, it’s huge. And when you’re disabled, regardless of what your disability is, it’s stress. Even for myself now, I’m having a lot of stress to deal with, relating to this stuff.

“All the way along I thought it was wrong how they treated people, pushing them. It was patronizing and dismissive. ‘We know what’s best for you. Don’t question us.’”

Little Mountain – the city’s first social housing project – had been a CMHC project since it was constructed. In 2007, it was transferred to the province under BC Housing. That same year, the city and the province entered into a memorandum of understanding. They agreed that Little Mountain should be redeveloped because it was “obsolete” and in need of much greater density. The memo called for buildings taller than four storeys, and a range of housing options.

It said funds from the sale would be used to develop “supportive housing” projects throughout the province. Supportive housing is for people at risk of homelessness, people with addictions, and elderly and disabled people.

The memo also said that whether or not the city approved rezoning for the site, the province would replace the 224 units and would look for a developer partner. They eventually put out a request for proposals and chose Holborn, a subsidiary of a Malaysian bank, and the same developer that is currently building Vancouver’s Trump Tower.

Although Holborn might have overpaid for the site at the time, the property is a much more valuable asset in today’s market. They also got an exceptional deal since they’ve held the property for years without paying in full.

“Where is the moral backbone of BC Housing?” asks Mr. Vaisbord. “I looked at the new development [plan] and thought, ‘all of that suffering for what? Did Sam and Joan have to die young from the stress for this? Did all these seniors have to be kicked out for this, another luxury development? What is at the core of our culture now? Is that all there is? Because that is tragic.”