They say the first step is admitting you have a problem.

Vancouver homeowners, after years of focusing on their growing equity and ignoring the housing inequality around them – have come to a new awareness: high home prices are crippling the region.

The city is now divided according to those who got into the housing market early enough that they could afford to buy and those who feel as if they've been shut out.

Following the NDP budget in February, there was the news report of an owner of a west-side house who lamented that he couldn't afford the new 0.4-per-cent school tax on his $6.5-million home. Response on social media was immediate – and largely unsympathetic. A decade ago, there would have been a chorus of protest from aggrieved homeowners. But now the cries from those left adrift by the tidal wave of rising prices are far louder.

Wealth inequality has grown so wide that even house-rich homeowners are worrying that it is having a corrosive effect on the city at large.

The fact that the new budget has been met with generally little push back, other than from those with business interests, is proof that there's been a shift in perspective, says Mario Canseco, public opinion researcher and vice-president of public affairs for Insights West.

"What's been interesting about the past few months is we are seeing more about the concept of making things fairer for all," Mr. Canseco says. "There's the fact that the reaction to the 'speculation tax' was so positive. Right now, it's been very well received and people are happy with the discussion. At least there is a bit of action on the housing file, and millennials and Gen-Xers are the first ones to react positively to it, and even boomers, even homeowners, and Liberal voters are saying, 'We had our time, it's okay, we can definitely afford [to pay] a bit more.'"

Mr. Canseco's poll found that 72 per cent of people who live in the Lower Mainland and own their principal residence were quite okay with the increase in property-transfer taxes on homes worth more than $3-million. While it wasn't surprising that 92 per cent of renters polled in Metro Vancouver said they'd be happy to see a 10-per-cent drop in real estate prices, it was more surprising that 61 per cent of homeowners also gave a thumbs up to such a drop. The study drew from 801 British Columbians surveyed online.

"The message is, we should pay a little bit more because we are in a crisis," he says.

"What's sad is, most of this quantitative data is lost against the story of so and so who has a house, but because they aren't rich, they haven't paid taxes, so maybe the tax will apply to them."

Generation Squeeze is a group that's gained a political foothold in the past couple of years because of growing wealth disparity between generations. It lobbies government to improve affordability for Canadians in their 20s to 40s, targeting the federal government and B.C. and Ontario provincial governments, and municipal governments in Vancouver, Toronto and Victoria, for policy change. In terms of housing, the group, which is funded by non-profits. the development industry and others, focuses on suitable supply, harmful demand and unfair taxation. Although they receive developer funding, private interests do not influence their research, says founder Dr. Paul Kershaw, a professor in the University of British Columbia's school of population and public health.

He says that over all, the budget was a step in the right direction in terms of addressing inequality.

"For the first time in years, a younger demographic has a reason to celebrate a provincial budget," he says.

Affordability for everyone is the destination, says Dr. Kershaw, who adds that around 32,000 people have indicated support for their message.

"Some people are winning the lottery from the rise in home prices, and that's crushing other people's dreams, or raising their rents. There has to be a better way to engage with those lottery winnings that's more fair between age groups and other demographic groups."

And inequality isn't just creating a divide between age groups, but within them, Mr. Kershaw says. The divide is between those who can buy into the market and those that can't.

In Vancouver, the gap between incomes and house prices is the widest in the country: The ratio of the average cost of a home to the average income of a millennial is 43. By comparison, it's 26.5 in Toronto and 14.4 in Montreal. Those figures came from the Future of B.C. Housing Report by Resonance Consultancy.

Home ownership, Mr. Kershaw says, has dropped by one-third among the under-35-year-old age group, compared with when their parents were getting started. He gives the example of his mother, who managed to buy a house in West Vancouver on an average income, as a single parent. He makes more money than his mother did and he commutes to UBC from Pitt Meadows.

"Fewer and fewer young people are getting into home ownership in B.C. Those that do are tending to acquire additional wealth in their homes, that their counterparts aren't."

Dr. Rainer Borkenhagen and his wife moved back into their one-bedroom condo in Vancouver when the city's empty-homes tax was announced. If they'd continued spending most of their time on the Sunshine Coast, they would be looking at an extra tax of $8,000, he says. They oppose the province's new 2-per-cent "speculation tax," on vacant homes owned by people who don't pay income tax in B.C., because, as currently written, the tax applies to British Columbians who would have to pay upfront and then apply for a tax credit to offset some of the tax.

They are working with a new group called Issues B.C. that has formed in opposition to the tax and is lobbying government to exempt all Canadian taxpayers from the "speculation tax," as it's being called. They say it's more of an empty-homes tax. (Finance Minister Carole James has said the governmen's tweaking the tax before it's implemented, so that it better targets speculators, not B.C. residents.)

Otherwise, he's pleased that the government has addressed rising housing prices by attempting to cool the market. He, too, would like to see a price drop, even though he owns property. And he approves of the 20 per cent foreign-buyers' tax and the increased school tax and property transfer tax on homes assessed at more than $3-million.

"I think those kinds of measures are realistic," says Dr. Borkenhagen, who plans to retire this year.

Dr. Borkenhagen had purchased his small Vancouver condo as a gathering place for his kids who still live in the Lower Mainland. It was his way of keeping his family together in a market that makes it hard for families to stay connected. He worries about his kids' futures, but he says he and his wife are an example of older people who are doing everything to pave the way for the next generation.

"We had a typical five-bedroom home in Dunbar, where we raised three kids, then we went into a three-bedroom townhouse, then downsized into a two-bedroom condo. Now, we have our one-bedroom condo [in Vancouver].

"In the meantime, we've transferred significant equity to our children to help them start getting into the real estate market. We've done what Vancouver presumably would like people to do: downsize, and make room for the younger generation, and give them a reasonable start."

None of this is to say that Vancouver is no longer a tale of two cities. There's a greater awareness of a crisis and the need to share some of the wealth, but the gap is still big between renters and homeowners; it intersects with wealth, class and the stigma toward renting in Canada that means renter rights often get sidelined.

In B.C., 42 per cent of millennials and 27 per cent of Gen-Xers rent. Sixteen per cent of people over 55 are renters, according to the Resonance report.

The VTU released a statement that said it found the B.C. budget "deeply disappointing to Vancouver renters." They say it did little to protect tenants from displacement due to gentrification, such as the implementation of anti-renoviction laws.

"I see frustration to the point of people leaving," Mr. O'Keefe says.

The renter-owner divide, which is really about class, is not shrinking, he says. And it's not as simple as the housing market being a zero-sum game, where one generation wins at the exclusion of another.

"Obviously, the generational aspect is undeniable, but I try to reframe it as a class divide that's widening," he says. "There are superrich millennials, there are millennials whose parents are developers, and they become developers. And there are people who benefit from inherited wealth and all that. So it's not like all millennials are out."

He's also seeing a lot of seniors in the West End who live in poverty and who are being displaced because of gentrification, as luxury projects get built.

"Our No. 1 mandate is keeping people in their homes and maintaining the affordable housing stock that exists," says Mr. O'Keefe, who's 40 and lives with his partner and two small children in a three-bedroom rental. In seven years, they moved five times before finding appropriate housing.

"I just think it's at a boiling point, and we are either going to force a really significant amount of change, so it becomes a livable city for most people who live and work here – or we become even more of a ghost town, a resort town." 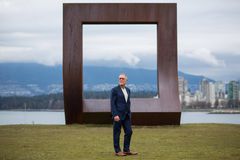