The mayor of New Westminster aims to protect the province’s former capital from becoming like Vancouver – a city where the commodification of housing is displacing residents.

“Are we going to lose some of that character that is part of what makes New Westminster such a cool place?” asks Mayor Jonathan Coté. “It’s always back of mind for myself. I’m excited to see urban renewal, and the increased population around downtown, and SkyTrain stations, is very positive. But there is another side of urban renewal that can lead to increased housing prices – or push away more unique private small business operators. How do you find that right balance?”

New Westminster is a small city: it measures only 15 kilometres squared and has a population not much bigger than the University of B.C., at 71,665 people.

The very thing that made New Westminster lose cache when the suburbs hit their stride several decades ago is the very thing that’s revitalizing the place today: its urbanity. New Westminster has transformed in the past decade, with more than $100-million in improvements, including a park that has revitalized the waterfront, which connects to the River Market by a boardwalk along the Fraser River. And now, an enormous, old multilevel parking lot on the waterfront is in the process of being partly removed to open up Front Street with sunlight, trees and patio restaurants.

The city is also pushing to create a pedestrian “Q2Q” bridge to connect the New Westminster Quay with remote Queensborough, an emerging neighbourhood that sits on the tip of Lulu Island and is separated by the Fraser River.

If they can get the traffic and congestion problem under control, the city could easily become the most livable municipality in the region.

And with a long-term urban renewal plan well under way, it is poised to grow, to a projected 103,864 people over the next 25 years. It helps that Mr. Coté, who lives in downtown New Westminster, completed his master's degree in urban studies at Simon Fraser University. At 36, he is the youngest mayor in the region. A reporter doesn’t have to go through a media department to reach Mr. Coté: he’s an accessible mayor who responds by e-mail and arranges his own interviews.

“New Westminster is, for all intents and purposes, a fully built out community,” he says. “But there is still continued pressure to grow. And we recognize as we anticipate to grow over the next 20 years, that without any opportunity for green field [development], we have to look at intensifying.”

"New Westminster is … a fully built out community,” Mayor Jonathan Coté says. “But there is still continued pressure to grow."

As a council member, Mr. Coté had long dreamed of updating the city’s official community plan. Now that he’s mayor, he’s about midway through the OCP, which hasn’t been updated since the 1990s. His focus is encouraging growth without pushing out families and long-term residents. That means keeping housing prices aligned with local incomes, a seemingly impossible task in the current climate. It also means, crucially, maintaining a supply of housing where young families will want to live.

“I often think if our urban renewal process means the people living here originally in our urban environment can no longer afford to live here, and they have to move out, then I won’t view our urban renewal as a success,” he says.

To keep families, they boosted the number of bigger condo units. In January, the city introduced a requirement that all new condo projects contain at least 20 per cent two bedroom and 10 per cent three bedroom. They also changed a previous bylaw that required a window in each bedroom so that developers could design spacious three bedrooms with more flexibility. Now, a bedroom is allowed if it has “borrowed light,” which is light that comes into the room indirectly, such as via a glass block wall.

But they also discovered that what people really want is ground-level housing, such as townhouses, rowhouses and duplexes. They want yard space and direct access to the outdoors, and they want nearby amenities. A bigger space on its own isn’t enough. So, their plan is to rezone specific areas for multifamily.

Mr. Coté typifies the demographic they studied. He moved his own family from a too-small single-family house to a bigger three-bedroom-and-den condo. However, he has found the lack of immediate access to outdoor space a challenge.

“Looking at prices of single family homes, and how difficult it is to get into that market, I wonder what options we will have going into the future. For us, we enjoy a more urban environment. It’s working for our family lifestyle, but the other angle is economic. I have no interest in taking on an $800,000 mortgage. I don’t know how families can possibly afford that anyway.”

Mr. Coté noticed that there was a “missing middle” in the city’s housing options, such as townhouses, which are scarce.

“We have one of the lowest percentages for rowhouses and townhouses. And that’s an important part of the housing segment, for people that are looking for ground-oriented homes and have been completely priced out of the single-family house market.”

There are only 13 condo or townhome units with three or more bedrooms currently for sale in the city, according to New Westminster planning analyst, Tristan Johnson, who also supplied the population figures for the city.

Although bigger units take longer to sell in New Westminster, the developers are stepping up, because they know the demand is there. It’s also easier to do business when land costs are lower. Tony Hepworth, president of Pennyfarthing Homes, is building condo and townhouse projects in both Vancouver and New Westminster. His current Grayson townhome and condo development on Cambie is mostly two and three bedrooms. But families in Vancouver are competing with wealthier empty nesters who are snapping up the larger units. In comparison, his New Westminster project, River Walk, in Queensborough, is 36 townhomes priced for families, starting at $529,900. 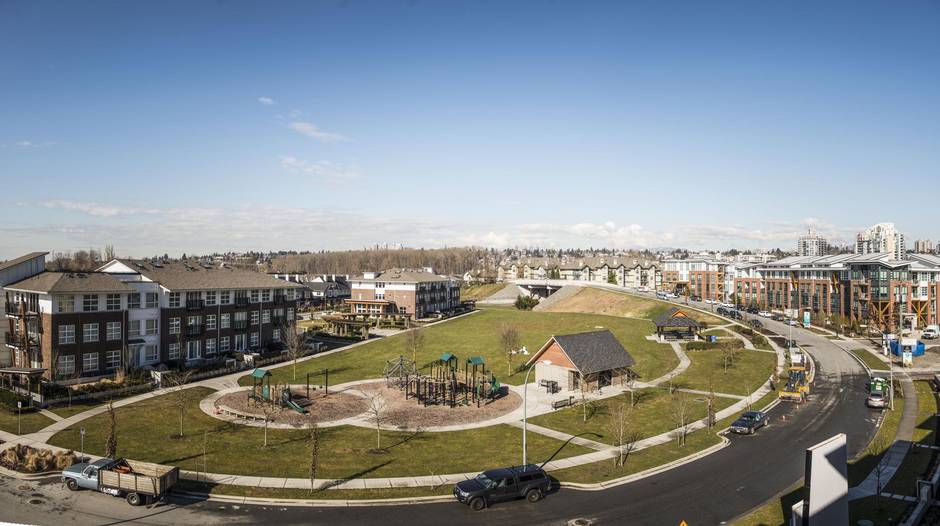 Mr. Hepworth says he intends to do more work in New Westminster, where land is not “critically expensive.” He recently bid on a property in North Vancouver that had 26 offers on it.

“People who bid on a home on the west side know the list price is not even a reference point any more. They are flying blind. And the developers have exactly the same situation – we are flying blind, too. Everybody is over paying. That is just one indication of how difficult the market is right now.”

Dominating Queensborough is Aragon’s sprawling community, Port Royal, which the developer had purchased from MacMillan Bloedel in the late nineties. The area had been rezoned from industrial, and when built out, will have about 3,000 residents.

Aragon president Lenny Moy, reached in Los Angeles where he’s got three other projects, says he’s kept speculation out of Port Royal by not selling presales. Instead, he’s sold by showing display homes, and dozens of other houses in various stages of construction. Speculative buying is largely blamed for driving prices in Vancouver.

“There is a way to target your development so that you don’t get as many [investors],” says Mr. Moy. “I would not say we are precluding investors, no. But we have always believed that particular marketplace is for people who are homeowners, who want to live in the units.”

Because he got in early, he’s built every type of housing in Port Royal, including single family, duplexes, townhouses, coach houses, a low rise, rentals, and now a 22-storey high rise with marina. He’s targeted young families and empty nesters with two and three bedroom units. Seventy five per cent of the high-rise, which is nearing completion, will be two-bedroom units. In the waterfront 111-unit Portage project, which is complete and nearly sold out, prices range from around $310,000 to $690,000. As part of the community plan, he’s also built parks and built up the dyke.

“When I first bought the property of course there was about 50 acres. And so I was lucky enough to be able to look at things and tried to figure out what I would like to see in the community. I had a blank slate. I looked back at what I saw as a developer, and decided it would try to put in as much variety as possible.” 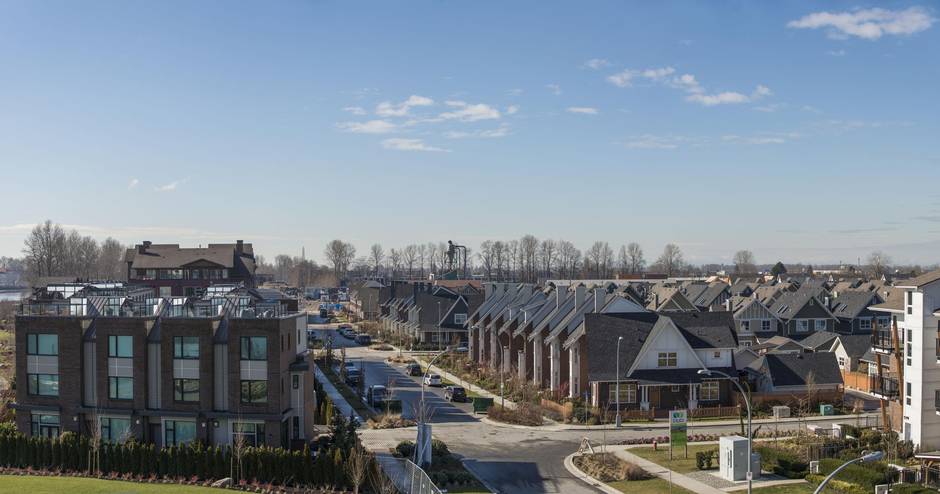 As developers and residents get pushed out of the Vancouver market, New Westminster is seeing its most active year in terms of development, says director of development services, Beverly Grieve. The city has taken a decidedly hands-on approach to planning out the growth. In order to get feedback from residents as part of the OCP, staff set up food trucks in each neighbourhood and asked residents to draw onto maps the areas where they believe density should go, and where it should not go. Staff is working with a resident task force to explore ways to protect the historic housing of Queen’s Park, and the possibility of making it into a heritage conservation area. When the city identifies a heritage asset at risk, they can offer the owner extra square footage, or a laneway house. That leverage has saved many heritage sites, says Ms. Grieve.

“I think what makes New Westminster different from other municipalities around us is that there’s a different culture. There is a requirement, and we really encourage it too, that the development community needs to have a good conversation with the residents. And we find that when residents are aware of what’s coming, they understand the rationale. They get the project, let’s put it that way,” says Ms. Grieve.

Anne McMullin, president of the Urban Development Institute, says the residents are connecting with the transformation and see added density as a benefit.

“Particularly over the last two to three years, we’ve seen in New West a huge revitalization. You see more young people moving into the area, the kids and the strollers. It has to do with a cohesive council, a knowledgeable staff, working together.

“You see the [municipalities] who recognize urban space and urban planning, and are doing it to create a great city – not necessarily for the politics – and it’s working.”