During his daily nine-kilometre run along some of Richmond's rural roads, Andrew Waldichuk started to notice the garbage.

He'd see old appliances, toilets, furniture, garbage bags, Styrofoam and drywall – a lot of drywall. In early January, on a remote strip of Cambie Road, he and his running buddies spotted about 30 bags marked "asbestos" dumped alongside a berry farm. He'd never seen so much illegal construction waste on this stretch of blueberry, cranberry, corn and cattle farms.

Mr. Waldichuk showed me the spot on a sunny day this week. We pulled up to a wide ditch where ducks and a heron lingered. Among the bramble someone had dumped a toilet, garbage bags of drywall and fluorescent-light fixtures. Across the way lay a stack of drywall on the edge of a farm.

The environmental hazards are clear. The area is abundant with bird species. Nearby, workers are crouched, pruning. Mr. Waldichuk, a lawyer who works in Richmond, has made a practice of phoning the city over the dumping. He uses orange pylons to mark the debris to make it easier for city staff to spot.

"I have phoned in couches, furniture, desks, a rotting cow's head. Everything gets dumped out here," he says.

"The mercury from that fluorescent tubing will leach into the water here, and that's a crime."

Food safety is an issue, too. City of Richmond spokesman Ted Townsend points out that local farmland is filled with irrigation canals. Contaminants from construction waste such as asbestos and mercury could easily seep into the soil.

Illegal dumping – much of it construction and household waste – has become a fact of life for the Lower Mainland. It is the byproduct of a housing boom where the rush is on to make money, get the job done and cut costs. Some people are choosing to dump their garbage instead of making the trip to an out-of-the-way processing facility where they'll have to pay fees. But the cost of cleanup, which can be substantial, is transferred to the taxpayer.

Because dumping is on the rise in Vancouver, the city is planning to more aggressively tackle the problem this year.

"There's been so much development and construction going on in the Lower Mainland in general, we are seeing a lot more of it," says Vancouver's director of waste management and resource recovery, Albert Shamess. "The only theory I've come up with is just the drastic increase in development in the last couple of years. It's skyrocketed.

"I think it's driven by economics – people don't want to pay the tipping fee to dispose of it properly."

Costs for cleanup and investigation came in at $1.5-million. For 2017, the city has budgeted $1.9-million for cleanup of illegally dumped garbage.

It has budgeted more, Mr. Shamess says, because it's planning to ramp up its approach to the dumping. He says city crews need to respond more quickly to clean up at the dumping sites, because if they don't, those sites quickly grow. For some reason, when people see garbage dumped in a spot, they add to it.

"It's surprising where you do find it – in back lanes, under bridges. One of the challenges we have is wherever there's an area slated for development, and they put up those blue fences, automatically it becomes a dumping ground."

He says staff have caught a few of the dumpers. They've even been able to track them through the items they've dumped, which have included information such as a company name. The fines run from $150 to $10,000.

"We did have some last year that were in the thousands, but we haven't got up to $10,000," Mr. Shamess says. "In some cases, it's individuals or small contractors."

To get the junk out of the alleys, the city is planning a pilot project this year that will offer big-item pick-up of household goods. Mr. Shamess says they've got to figure out the cost of the service, how to pay for it and other logistics.

Surrey has had a similar program for the past decade, but the problem is that most people don't know about it. So part of the city's attack plan on garbage is to educate people that they don't have to drop that furnace or couch in the back alley. The city will pick it up.

Rob Costanzo, manager of engineering operations, says Surrey spent a little more than $1-million on cleanup costs from illegal dumping in 2015. The amount had doubled since 2005. Again, the increase correlated with housing construction. At one point, he says, they even hired former police officers to sit in cars at dumping locations at night and try to catch people. It didn't work.

"A good majority of it is construction type waste, or renovation type waste," Mr. Costanzo says. "We are trying to wrap our heads around how to reduce the impact of illegal dumping."

It hasn't been easy because Surrey is geographically big. But after a year of aggressively tackling the problem, it has gotten cleanup costs down to $580,000. The next phase is a pilot project in the northwest part of the city involving 2,200 households, which has been hit hardest with dumping.

"We're placing cameras in the neighbourhood, and going door to door, to knock on doors and let them know about the large-item pickup program, educate them about illegal dumping and bylaw infractions," Mr. Costanzo says.

If their efforts have an impact, they'll tackle other areas of Surrey. Vancouver renters under pressure as landlords are persuaded to sell
January 20, 2017 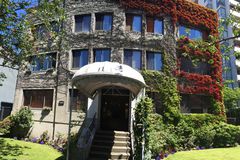