For the last three months, Mr. Ree has been sleeping inside SFU downtown, because his meagre student budget can’t support the growing cost of shelter.

Mr. Ree, who is from Japan and has lived in Vancouver for four years as a Canadian citizen, is one of a growing legion of people who have been pushed out of rental properties for any number of reasons. Most often, they are “reno-victed”, which is what happens when your landlord wants to renovate to charge a higher rent. With a vacancy rate of 0.6 per cent, landlords know they can demand more money. The situation is pushing students, and other low and average income earners, into a precarious and stressful survival mode. Mr. Ree sometimes couch-surfs, or, in winter months, during off-season, he might stay in a hostel. During summer, the downtown campus is quiet.

“Once it gets busy it’s not possible to have my stuff in school, so I’m taking for granted that there aren’t many people at school right now,” he says. “I don’t have much stuff. I have a suitcase and a box, because I’m a student from another country.”

His professor, Cole Lewis, says she’s horrified to see some of her students pushed into this state of semi-homelessness as they struggle to get through school. Looking for answers, she’s written letters to government officials and housing activists. Some of her students are getting up in the small hours of the morning to commute long distances from Surrey and Abbotsford, where they either live with relatives or rent places that are more affordable. She sees students couch-surfing for months. Another student has up to 16 people at a time living in her apartment.

Ms. Cole has helped at least one of her students find a home, and she’s cautioned the ones sleeping at the school about safety issues when living in a publicly accessible building.

“I am definitely seeing a struggle. And none of us wants to boot them out. But we can’t allow that, for their safety. It’s near East Hastings, and people can come in and out. I’ve had to ask them to find other arrangements. We’ve encouraged the student union to talk with students about who has an extra bed or couch, and they can come to us and we can put them in touch. But they are young and proud and want to figure things out.” 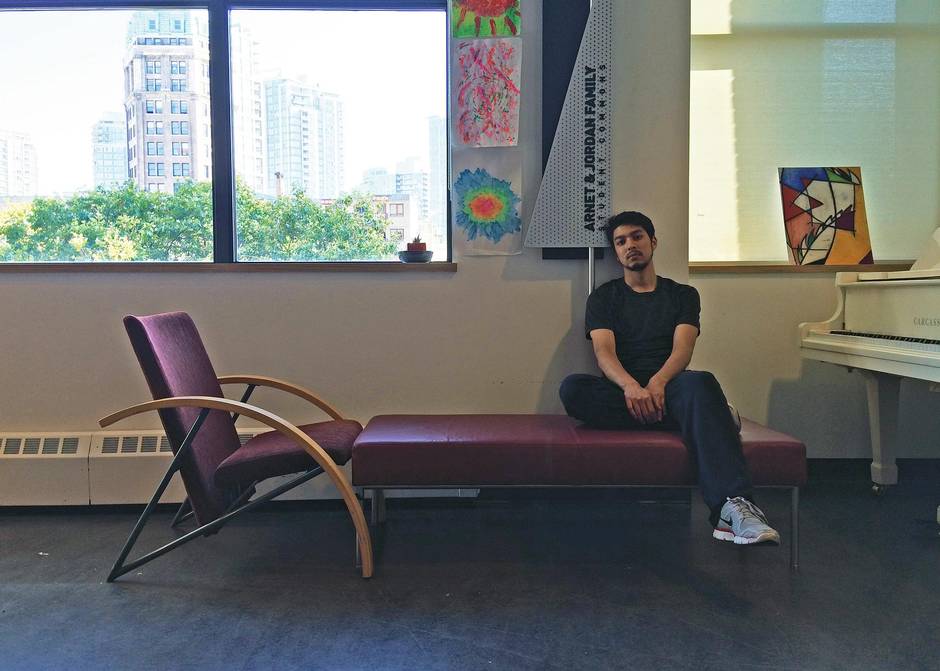 Ms. Lewis, a Yale University graduate who was thrilled to land her assistant professor job at SFU, is shocked at the city’s housing problem. She and her husband and daughter share a basement suite. When she sees friends undergoing eviction, she’s grateful to have her rental.

“I’ve never seen anything like this anywhere else. I’m from Ontario, and we moved here a year and a half ago so I could take this position at SFU. We are stressed more about money than before we came here. I have no idea how I will ever own a home here.

“I don’t care about a single detached home. I can’t even imagine owning a condo near my daughter’s school. Our rent right now is half my take-home wage. We can no longer save, which is new for us.

“I could definitely get hired in the U.S., but we are Canadian and we want to raise our daughter here in Canada. But if it doesn’t change, I don’t know.”

Cindy Kao, 21, expects she too will return to sleeping over at the campus when the school year begins in September. Ms. Kao and Mr. Ree used to rent a basement suite together but were threatened with eviction when they tried taking in a third tenant. They couldn’t afford the rent between the two of them, so they started sleeping at the school. Ms. Kao is off for the summer, and living at home with her mother in Langley. At school, she often finishes her work at midnight. Returning to her mother’s house in Langley isn’t a viable option because of transit schedules, so the school has become her part-time home.

“This is a huge problem, and we haven’t had much of a voice about it,” says Ms. Kao. “Just the whole market has gone too far.”

Friends have offered to take her in for a while, but she knows that’s not a long-term solution. Otherwise, the options are bleak, including renting someone’s couch for $600 a month, which Mr. Ree has done. Ms. Kao decided if she was going to sleep on a couch, she might as well sleep at the school. And for the most part, the security guards are sympathetic. She’s learned all the choice hiding spots, and knows the other secret nighttime residents also hiding out. Because the lights are on, she sleeps with a scarf over her face. But she worries about her belongings being stolen.

“It’s hard to keep it a secret living at school sometimes. But a lot of people do it. Definitely.”

Some say the anxiety and unease over housing is casting a mild depression over the city.

“It is definitely depressing,” says Mr. Ree. “I know there are worse cases. But it makes it feel like Vancouver is not livable, or a kind place for a lot of young people,” says Mr. Ree. “Vancouver is more like a pit stop for people’s lives and they move on, even though it’s an amazing place.” 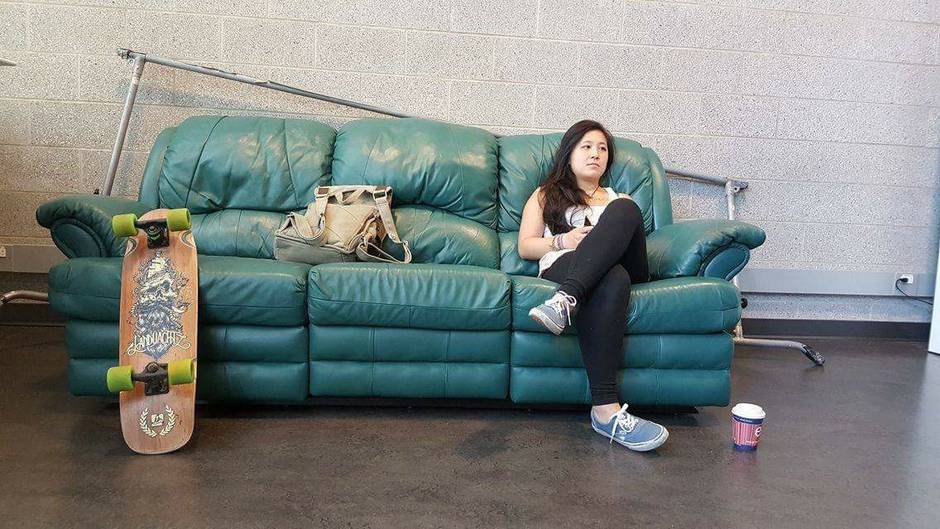 Cindy Kao, 21, expects she too will return to sleeping over at the campus when the school year begins in September. (Cross Li)

Mr. Ree says once he graduates he will probably move to Montreal, where life is more affordable. His classmate Mischa Sadloo, who pays $400 and lives with eight people, plans to move to Montreal or Europe one day.

She sees friends becoming resourceful in order to cope.

“Our friend would care-give all night for her grandmother, and go to school during the day. Then she found herself homeless and in transitional housing. There are two things – not much housing suitable for students, and nothing affordable in the city.”

Madisen Steele was waking up at 4 a.m. to go to her job at Starbucks, where she’d work until 1 p.m. and then go straight to class at 2 p.m. She’d stay at school until 10 p.m. and get home by 11 p.m. She did that for the fall semester but burned out and quit her job. She’s one of the lucky ones: She found a suite for nearly $800 a month, but her finances are stretched. She says indebted youth like herself, barely making ends meet, are an invisible group.

“The vast majority of us are living below the poverty line, and we’re all in debt. I have credit card debt right now, and I am only 24. It shouldn’t be that way but I went through a month in May where I was transitioning between school and jobs, and I didn’t have anything and I had to buy food and feed myself. So now I’m even further in debt than I would be with student loans. But it doesn’t show on the outside – it’s not obvious that people are becoming homeless. It’s a bit under the veil.”

The woman, who didn’t want to give her name because of her job, said she developed her first ever bout of depression this year when a student’s parents were evicted and couldn’t find a home. Today, the child is sleeping on the floor of his grandparent’s apartment, with his family crammed into the space. 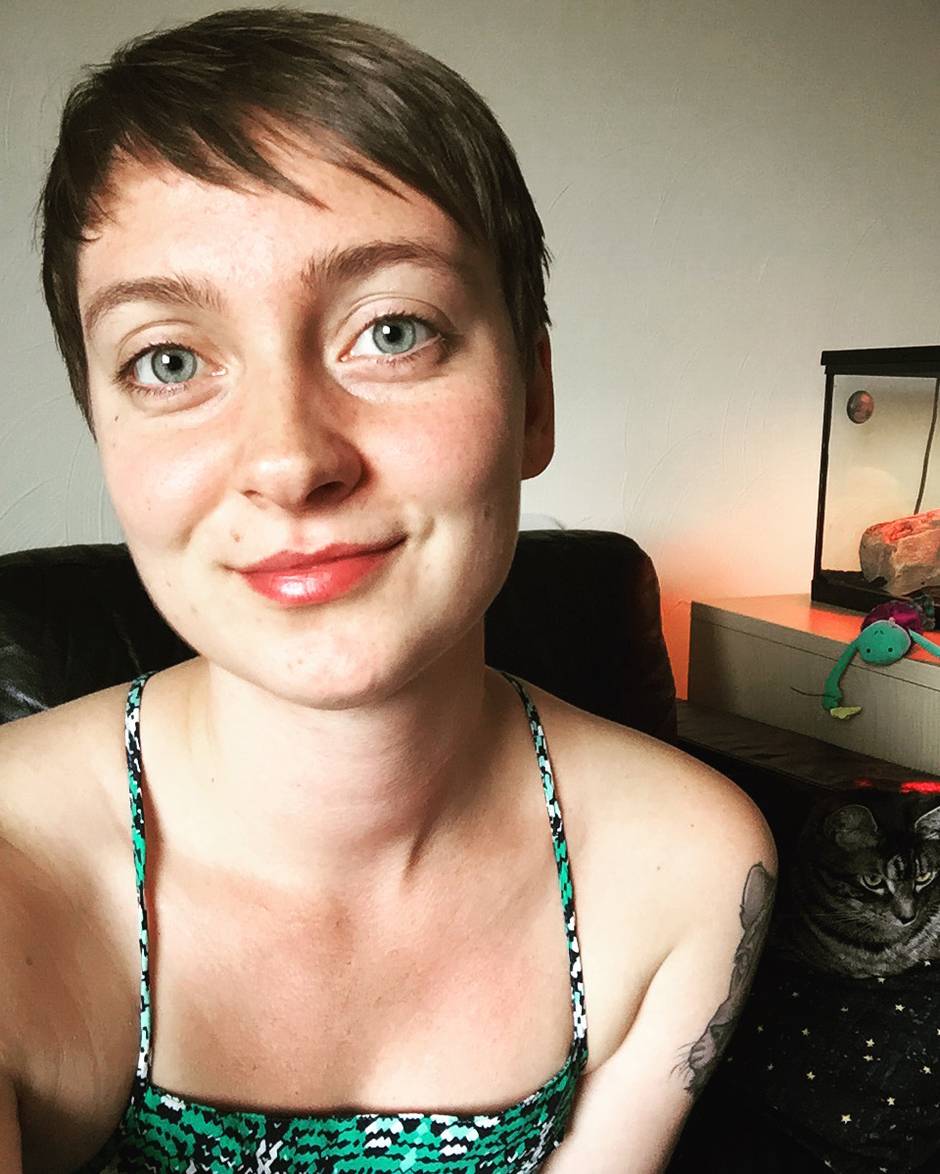 Madisen Steele, a student at Simon Fraser University, is having a tough time making ends meet, with a work/school schedule that stretches from 4 am to 11 pm most days.

She says he is one of five children in her class without a fixed address.

“Every single one of them is staying in a condo with their grandparents.”

These parents don’t always have the option of moving outside the city or to another neighbourhood. Parents that face eviction have the double challenge of wanting to keep their kids in the school catchment area. She’s angry at the suggestion that people who simply want to live in the city in a proper-sized, central home are getting accused of expecting too much.

“There is a lot more going on, with people who just want to keep their kids in school. We’ve all lowered our expectations. I don’t know anybody who wants a house. These parents aren’t bad parents. There’s just no end in sight, and it pisses me off when people say this is a first-world problem.”

She and her young family live in a secure rental, but she worries about her own future.

“I always thought one day, if we wanted to, we could afford a two-bedroom condo in East Van. Nope, that’s not happening. There’s no hope.”

Ms. Lewis, who lives on the west side, is also noticing kids in her daughter’s school that are anxious over their living situations.

“My daughter is seven years old, going into Grade Two, and there are a number of children who worry about it. They talk about how they don’t know if they will have their bedrooms for much longer, because their apartments aren’t stable. It impacts them. And we found out two days ago another friend got evicted. It’s this constant instability.”