For all the talk about the affordable housing crisis, the missing link has been transit.

When Martin Fernandez faced eviction from his Metrotown rental last June, one of his biggest concerns was moving to a neighbourhood that wasn't walking distance to transit. Mr. Fernandez, who makes around $3,000 a month and has two small children, wondered how he'd do the grocery shopping. One of his biggest fears was the idea of having to buy a car.

"If my kids need clothes, we go to Metrotown mall. We have many things here," he told me.

People like Mr. Fernandez depend on proximity to transit for survival. Since the majority of transit users are renters and low-income earners, building low-cost housing around transit would seem obvious.

But overwhelmingly, dense, free-market condo developments have been the priority around transit stations. The result is an increase of property values that have displaced the renters that need transit the most. In the Metrotown area of Burnaby, and near the Evergreen Line in Burquitlam, old rental buildings are being torn down to make way for pricier condos.

It's a state of affairs that has exasperated housing advocates like Kishone Roy, chief executive officer of the BC Non-Profit Housing Association. Mr. Roy, like a growing number of others who've studied the issue, says that no transit plan should go forward without a plan for affordable housing. The housing crisis simply can't be fixed without the transit piece.

"It is extremely backward public policy that the only people that can afford to live along transit lines in Metro Vancouver are people who can afford a car – and the people who need transit can't afford to live along those transit lines," says Mr. Roy. "It's happened for an array of reasons, including lack of government participation in the affordable housing market. There's been an abdication of the government's role in housing that's created mass homelessness, a rental housing crisis, and this weird development problem we have in Vancouver, where we have transit investments, but no housing investments at the same time."

That means building dense, affordable housing around transit lines that are already in the works.

"It's a game of diminishing returns, because when you lose that housing along the transit line, then you have to build somewhere else, and then they will need more transit out there. You can spend less and get more, if you plan these things together.

"The last thing you want is affordable housing and rentals to be so far off in rural areas and suburban areas you have to build more transit to get out to them," says Mr. Roy.

The National Household survey of 2011 shows that almost one in two renter households in metro Vancouver, which comes to 106,000 households, make less than $50,000 annually

It shows that as income declines, transit use goes up. However, the use of transit by homeowners stays flat.

Municipalities are limited. They can't create zoning only for rental housing. But, New Westminster Mayor Jonathan Coté says there are still ways to successfully promote rental stock, both new and old.

He has made it clear to developers that protecting existing rental stock in New Westminster is a priority.

"We are upfront that we do not support the rezoning of those properties. That wouldn't prevent people from tearing down or redeveloping a rental building, but it does take away the incentive [for redevelopment]. So, over the last three years, we haven't had a single demo request for a purpose built rental building, which is different than what we've seen in other communities in the Metro area near transit or anticipated transit.

As a result of New Westminster's efforts to protect existing housing stock, while pushing for new rental, it has become one of the region's most affordable municipalities.

The municipality has offered incentives to boost new rental, such as offering density bonuses and reducing requirements for pricey parking stalls. Since New Westminster's rental housing policy came along in 2013, the city has gone from two to three decades of almost non-existent new rental development to 1,000 new units being built in the last year.

As a result of the incentives, nearly half the developer applications in New Westminster last year were for rental buildings as opposed to condos, according to Mr. Coté.

And, incredibly, not one developer has applied to demolish an existing rental building, according to Mr. Coté. He says the program has exceeded expectations.

"Statistics that have come out recently indicate renters are far more likely to use transit than other tenure types, and we might be actually be shooting ourselves in foot if we are in a way displacing rental units and places where low and moderate income earners are able to live close to transit and moving them away from transit and redeveloping with brand new condo buildings that may be larger in terms of density, but have fewer transit users.

"No doubt the intensification of land use is critically important, but so is the dynamic of housing tenure, and making sure there are people living around transit stations that fit the demographic of people who need it most, and are most likely to use it."

Andy Yan, director of the Simon Fraser University City Program, says that 54 per cent of people that use transit for work are renters, according to the last census, in 2011. One-third of new immigrants rely on transit. By the time the new census is released next year, those figures will undoubtedly have gone higher.

The median income of renters is $34,000, about half that of owners, according to city of Vancouver data. Vancouver provides nearly half of all rental housing in the Lower Mainland. The city does already give priority consideration to rezonings that are 100 per cent rental in areas close to transit.

The city's assistant director of planning for midtown, Kent Munro, says the city pursues and encourages purpose built rental around transit. For example, Grandview-Woodland is undergoing a new plan to add density. About 65 per cent of the Grandview-Woodland neighbourhood is made up renters, and they live in older rental stock. The area is also within walking distance of transit. The fear is that redevelopment due to new zoning will displace those residents. Mr. Munro has said a "pace of change" policy is going to limit redevelopment of rental buildings in the first three years of the plan. It remains to be seen whether merely slowing the inevitable tide of redevelopment will actually work to protect the community. But Mr. Munro is on board with the idea that transit is a key piece of affordability.

"It allows people the choice to not have a car and to reap the resulting savings," he says.

The timing is better than ever to connect housing with transit. The province has committed $355-million to affordable housing over the next five years, as well as $246-million for transit in the region. For the first time in 25 years, the federal government is involving itself in the question of affordable shelter. It has kicked in $2.3-billion over two years for affordable housing across Canada. It's kicked in another $370-million for transit in Metro Vancouver as part of the first phase of infrastructure funding. And TransLink is committing $125-million for regional transit.

One idea is that the feds make their new transit funding conditional on municipalities creating affordable rental housing located near transit hubs.

There is another big picture reason that transit-oriented-affordable housing plays a crucial role.

Home ownership is our No. 1 method of growing and securing equity for old age. As home ownership becomes elusive, millennials and other low-income residents getting their careers underway must find ways to cut costs if they are to build equity.

"With part-time or precarious employment, they are not going to qualify for mortgages, ever," says Mr. Yan. "The fact of the matter is, at least on a national basis, about 20 per cent of the population in Canada will be lifelong renters. Home ownership is one of the major elements of wealth generation. How do we engage with the fact that they're not going to be homeowners?

"It's a triangle: transportation, jobs and shelter."

Paul Kershaw, a University of B.C. associate professor and founder of Generation Squeeze, which advocates on behalf of young Canadians shut out of the property market, says we can't address affordable housing without addressing transit costs.

In 1976, it took five years for a first-time buyer to save for a 20 per cent down payment. Today, it takes 23 years, according to Generation Squeeze research.

Renting for a lifetime may not be the end of the world, says Dr. Kershaw. But the transition for young Canadians has been a shock, and there's the question of how they will save for their old age if home equity isn't in the cards. Cutting major costs is a key solution.

"We need to recognize that that's a major adaptation we are asking of the younger demographic in this region to make, and that's happened very quickly, and we need public policy to meet them somewhere in middle."

Vancouver rental crunch threatens to squeeze out vulnerable tenants
May 16, 2018 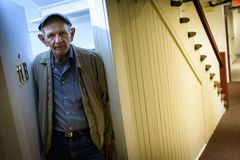