One of Vancouver’s empty houses is about to undergo a rare transformation – from single-family luxury abode, to multifamily housing project.

Since its lone occupant Judith Jardine died, the 9,000-square-foot WilMar Residence on South West Marine Drive has sat vacant for a decade. Ms. Jardine had lived in the sprawling estate house for 20 years and left it as part of her estate. On Sunday, the home is part of the Vancouver Heritage House Tour, and the public will get a chance to see it in its original glory for the last time. This summer, if the city approves its plan, a local developer will begin construction to turn the mansion into two 4,500-square-foot duplex units. James Evans will also construct five 3,500-square-foot houses on the large property. Buyers will share a driveway. 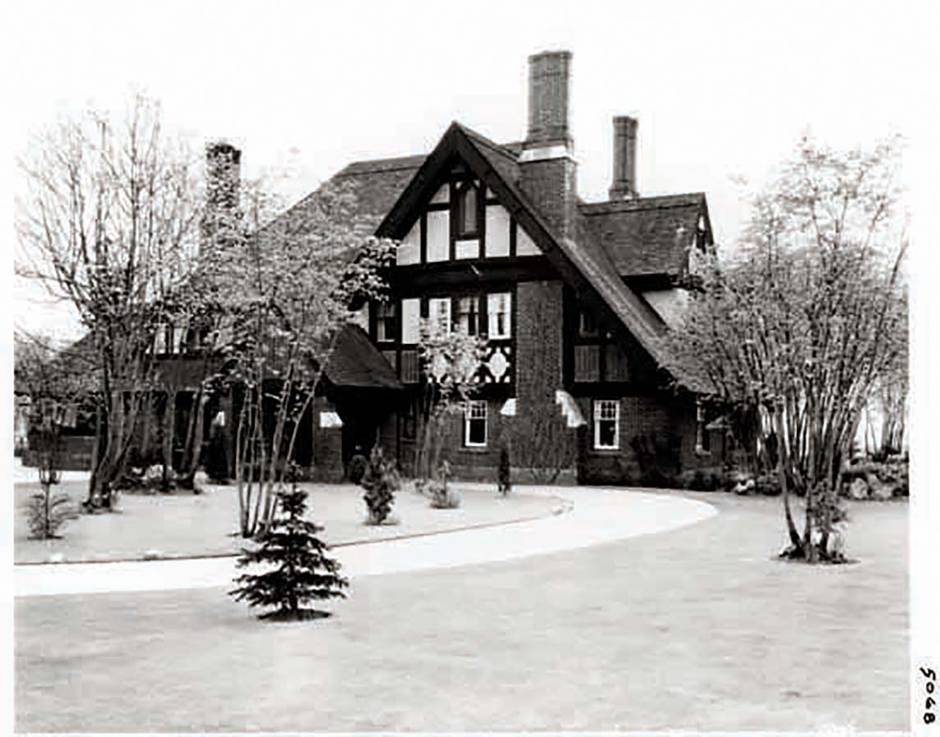 The WilMar will be a first for prestigious Marine Drive, which still has some grand old estate houses that were built in the 1920s.

Mr. Evans, a developer who sees value in old properties, has spent four years off and on trying to repurpose the WilMar. It’s on the heritage register, but that doesn’t mean it’s safe from demolition. He says he walked away from a plan in 2012 after talks with the city’s real estate department fell apart. Last year, he and his partners negotiated a deal with the trustee to buy the property for $7.5-million. And he came up with a new plan with the city to build one less unit and add a common amenity room instead. It goes to council this month and, if approved, he could start construction as soon as July. But he’ll only feel relief when he has approvals in hand. 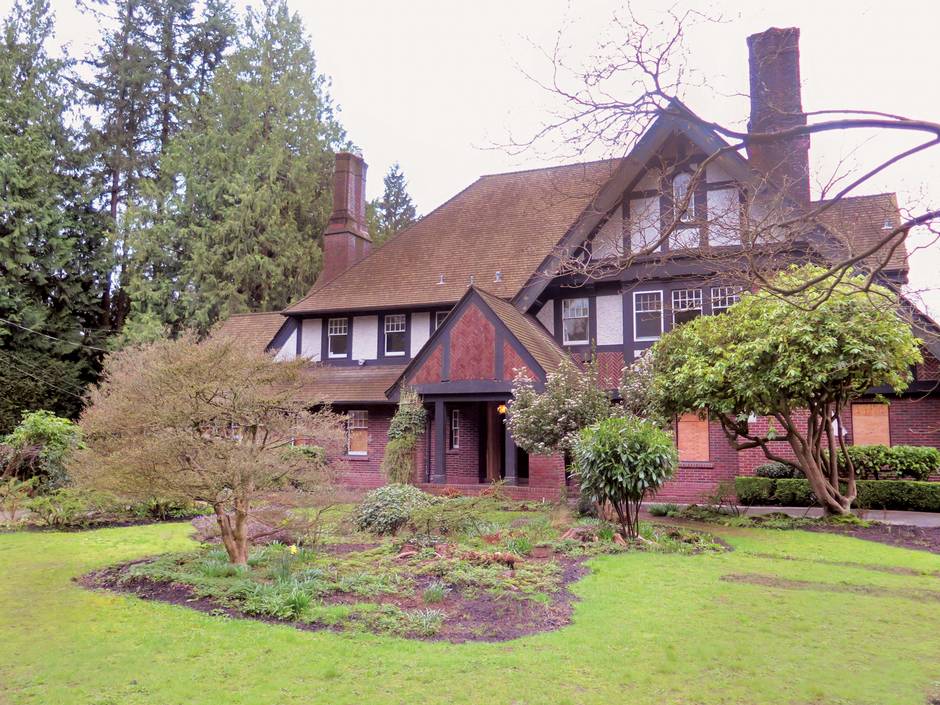 “I’m either really stupid or really stubborn, I haven’t decided which,” says Mr. Evans. “You certainly need a degree of perseverance and passion for this.”

Mr. Evans isn’t new to the game. His company restored the Jeffs Residence at 1298 Salsbury, just off Commercial Drive. The Queen Anne Revival found new life as a multiunit building with 13 infill townhouses. That project sold quickly, and is now home to several young families.

The conversion of old properties into denser developments makes sense on several fronts: it maintains the character of the neighbourhood; it increases density; and it provides less expensive strata housing. As well, conversions are far more likely to provide rental than a big new house. Mr. Evans calls it “intelligent density,” because it checks all those boxes. There’s another plus – fewer demolitions and less construction debris going to landfill.

While the city can’t control who buys, it can control what gets built, as Mayor Gregor Robertson pointed out in a Walrus magazine piece this week. In his opinion piece, Why is Vancouver so expensive?, the mayor advocates for townhouses and rowhouses, and says that single-family houses “are a remnant of a past and less-sustainable era of city planning.”

That is true, if we’re talking about massive new monster homes, which are the antithesis of sustainable. But if the mayor wants to stop the commodification of housing, he’d advocate for the retention of old, existing buildings that provide cheaper alternatives (such as rental) and are often a greener alternative to new builds. Europeans routinely refurbish buildings because it’s not only the green thing to do, but also a huge community advantage that lowers costs and protects diversity.

Conversely, the big new houses and townhomes built in Vancouver are not providing affordable housing options, as anyone can see from the prices along Cambie corridor, or the old co-op buildings coming down in Kerrisdale to make way for luxury condos. And, as we’ve seen from profit-driven land assemblies, neighbourhoods get torn apart once long-time homeowners are pressured out of their homes with the lure of big money.

The U.S. National Trust for Historic Preservation released a report in 2014 that showed areas with blocks of smaller, older buildings fared better economically, socially and environmentally compared to ones made up of large, new buildings. 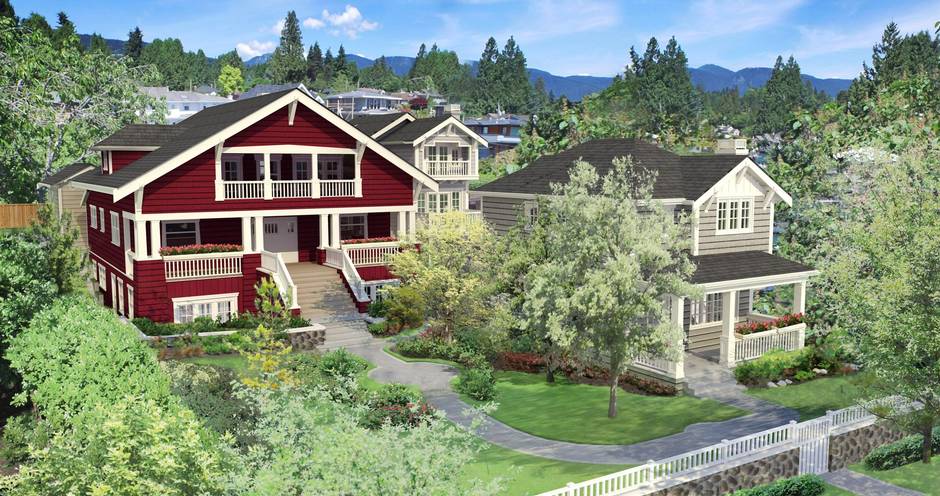 Artist's rendering of a proposal to redevelop the Vinson House property into a multifamily complex. (Geller Group)

If the city truly wants to preserve old houses, reduce wasteful demolitions (so far 323 demo permits have been issued this year), and provide affordable options, they’d act quickly to untangle the bureaucracy and help builders and homeowners save existing houses.

In the face of mounting demolitions in Victoria, a city councillor recently called for an emergency moratorium on the wasteful loss of houses.

“I have no problem with older homes being converted into units, which increases affordability, but it’s the physical demolition of these perfectly useable buildings, which have value both for shelter but also heritage value, that I think is a big problem,” Councillor Ben Isitt told the Victoria Times Colonist.

Architect Michael Geller is on his second house-conversion project in West Vancouver, where he’s finding the process much more straightforward than what happened at the WilMar. His new Vinson House Cottages was just given the thumbs up by city council after about a year since his initial proposal – not bad, compared to Vancouver, he says.

“[In Vancouver] it is so profitable for house builders to demolish an older house, whether heritage or character, and to build a brand-new house, that there’s little incentive for most of them to embark on the uncertain planning process,” he says.

“When we talk about conserving heritage, they need not be mansions or even very significant houses. I think the city should make it easier to save character houses, and it would be so easy to do that if only builders could build a second house at the rear or the side of the lot and sell it – taking advantage of the unused density that often exists. That doesn’t mean some of these houses won’t be demo’d, but it would increase the likelihood of builders being willing to conserve and create new housing choices in the neighbourhood.” 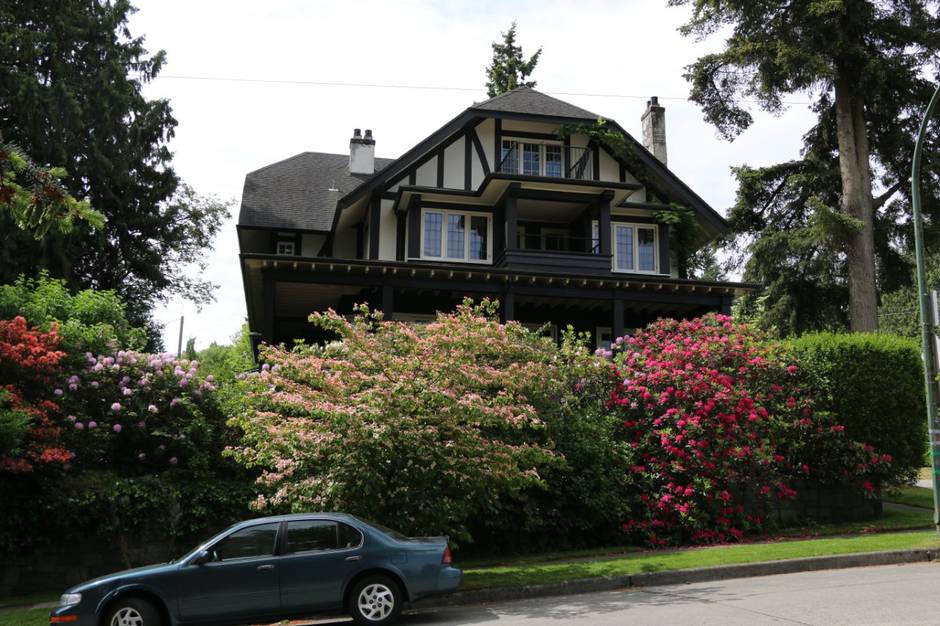 Elizabeth Murphy bought the house from developers who were about to demolish it.

His new project will save the 1913 Vinson House, the first house in upper Hollyburn. The Craftsman-style home will remain intact, but its basement level will become a separate strata suite, with two coach houses added to the property. The house’s owners had approached the city about designating and converting their beloved home into a multifamily property, which was key to saving it. The idea was a fit, partly because of the success of another Geller project, Hollyburn Mews, and also because West Vancouver is slowly embracing the idea of denser neighbourhoods. The city’s manager of economic development, Stephen Mikicich, says they learned that from a community feedback study in 2008.

“We heard loud and clear that people still value the idea of a single-family home, but a large home on a big lot up a steep driveway doesn’t cut it any more,” says Mr. Mikicich. “There was an appetite for various forms of infill housing and gentle densification that could give you a smaller home with bit of garden.”

In Vancouver, those who have endured the lengthy process of densifying their properties say it has been well worth the effort – not just the satisfaction of creating additional housing, but the financial rewards, too. Elizabeth Murphy bought an old house on a double-size corner lot from developers who were about to demolish it. She applied to have the house designated, then subdivided the lot, and developed half as a strata duplex. She added a secondary suite to the original house. Ms. Murphy says she didn’t lose any value in designating the house, and transformed a property from housing one family to four.

“The staff at the time were really supportive and pushed this thing through,” she says. “But they definitely need a new process at the city. They need a separate stream for this stuff, and a staff that understands it.”

In Kerrisdale, Beth Seaton says she paid $1.7-million for her house in 2014, which works out to $386 a square foot. The house, which had already been designated heritage, is also on this year’s heritage tour. The property is 75-by-100 square feet, with the rear part of the lot subdivided for a three-storey, independently owned coach house that was built in the 1990s. Ms. Seaton’s house has a garden-level suite with eight-foot-high ceilings that is home to a family. So, a big Kerrisdale property that used to shelter one family now houses three. Meanwhile, the charming stucco house next door has been torn down and replaced with a monster house. 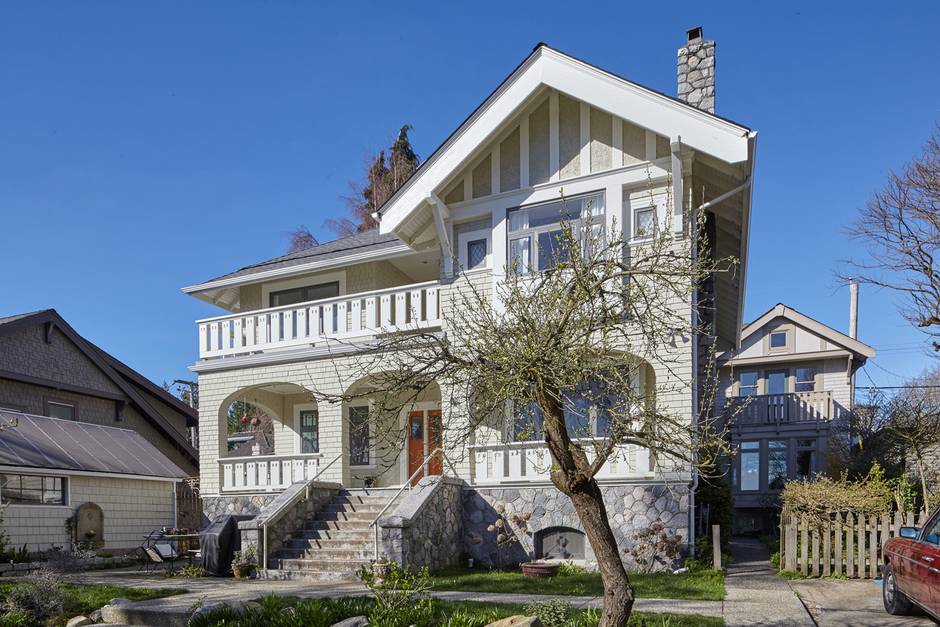 “We live in a market where all that counts is land value. The buyers who are buying these houses for umpteen million dollars don’t care about the houses at all. It’s all speculative value.”

Mr. Evans says anyone who wants to retain an old house is at a disadvantage compared to the person who wants to build new. He’s encountered passionate city staff who want to save the buildings, but bureaucracy gets in the way.

“I really hope that at some point, the city sits down and does a study or looks at the process. What I’ve said consistently is they need to find a way to make it a superior option to keeping old homes rather than build new. Builders are busy folks, and we don’t want to spend a lot of time having to think through things. I happen to like doing that, but most people won’t bother. They think, ‘Okay, I can get X amount of density onto the site, here’s what makes sense, off I go, plug and play, connect the dots and run like hell to the finish line.’”

“I understand when people get frustrated,” she says.

“We shouldn’t be punishing people for going through the process. It should be as clear as we can possibly make it, and that’s our intention. We will do a review, and, afterward, we will take it to council and we will simplify the process.”