Last week, just as the tail end of hurricane Sandy was lashing Toronto, five sets of bidders were sitting in parked cars outside one Leslieville house.

By the end of the evening the detached, house on Morse Street had sold for $932,000 and the sellers and buyers were inside sharing a bottle of champagne.

While some houses and condo units are languishing in Toronto's choppy real estate market, other homeowners are still reporting swift-moving deals out there. Properties in prime locations are selling within a week and sometimes generating a bidding war.

At the house on Morse Street, the buyers were feeling just as celebratory as the sellers when the deal was done.

"We knew we wanted it. We were prepared to be aggressive," says Maggie McAdory, who purchased the house with her husband Steve Barbier.

For Ms. McAdory, the most nerve-racking aspect of the evening was the fact that the couple's real estate agent had gone to New York for the weekend and remained stranded by the storm. They were trying to reach him for updates on the bidding but he was stuck with no power and a dwindling cellphone battery.

Meanwhile, the Huestises had been feeling some apprehension about the softening fall real estate market. The couple had already bought a house outside of the city in September. Just as they prepared their existing house for sale, the Toronto Real Estate Board was reporting a drop in sales compared with the same time last year.

"Definitely I was getting a little nervous," Mr. Huestis says.

He says his real estate agent, Shea Warrington of Real Estate Homeward, remained confident that the renovated house with a new garage would attract multiple bids – even as she was warning him to dig out the candles and the matches in case the power went out.

"Leslieville has really blossomed," he says, recalling that the Hells Angels had a club house just up the street when the family first moved in. Within six months of their arrival, he says, the police closed down the motorcycle club and Starbucks announced its first cafe in the area.

"It's a great neighbourhood and we're close to the core of it."

He says the couple wasn't surprised to receive so many offers but they were definitely pleased.

For her part, Ms. Warrington says the location is ideal: the house is within walking distance of the shops and cafés of Queen Street but far enough along a residential street to feel removed. The main-floor family room and the parking for two cars also drew bidders, she adds.

"To get [a] detached with that kind of parking in Leslieville is so unusual," she says. "And the renovations there were just stellar."

Ms. McAdory and her family are pleased because they think the asking price was far too low. A detached house up the street sold for more than $900,000 in the summer, she says, so they made their offer based on that precedent.

They already live in the neighbourhood. They are move-up buyers who love the 25-foot-wide lot and the proximity to the local school.

The home's mansard roof also makes it stand out from others in the neighbourhood.

Ms. McAdory says she and her husband hope to keep their existing house as an investment property and rent it out, just as they still own the condo unit that launched them into the market.

"We believe that it's always going to be a good investment to have real estate in the downtown area in Toronto."

Meanwhile, on the other side of town, a house I wrote about last week sold on the offer date this week. The house at 3 Baby Point Cres. sold for $1.5-million, which is just shy of the asking price of $1.528-million, says real estate agent Theodore Babiak of Royal LePage Real Estate Services Ltd. 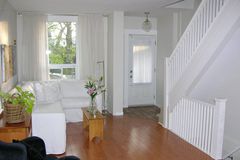 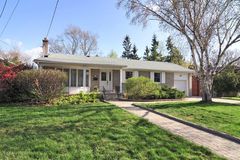 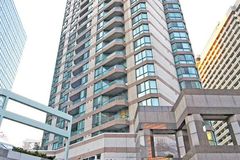