Canada's real estate market will have a hard act to follow after a record-setting 2016 for prices and sales.

The average price for various housing types sold nationally for all of 2016 reached a new yearly high of $490,495, up 10.7 per cent from 2015, though there were stark differences within the country, the Canadian Real Estate Association (CREA) said Monday.

Ontario and British Columbia accounted for 66 per cent of last year's Canadian sales of existing residential properties – volume rose 9.4 per cent to 243,400 transactions in Ontario and climbed 9.5 per cent to 112,209 sales in B.C.

"Clearly 2016 was an remarkable year for Canada's housing market with resales setting a new record high. Looking ahead, we expect that housing policy changes, stretched affordability and rising interest rates will exert a cooling effect on the market," Robert Hogue, senior economist at Royal Bank of Canada, said in a research note.

In October, the federal government introduced a tougher "stress test" for gauging whether home buyers can handle an eventual increase in mortgage rates.

"Tightened mortgage regulations are expected to contribute to lower sales activity this year, though the extent to which they will weigh on housing markets across Canada will vary," CREA president Cliff Iverson said in the industry group's year-end report.

"New regulations mean that in order to qualify for a mortgage, home buyers will either have to save longer for a bigger down payment or purchase a lower-priced home," CREA chief economist Gregory Klump added.

In Alberta, sales last year dropped 7.6 per cent to 52,169 transactions. But housing activity in Calgary and Edmonton picked up in December compared with November.

"While the oil-beleaguered markets have perked up, high unemployment will continue to limit home price growth over the next two years. Meanwhile, Montreal, which has been on a job-creating spree in the last six months, may become one bright spot," Toronto-Dominion Bank economist Diana Petramala said in a note. The Montreal region had a benchmark home price of $312,700 last month, up 3.3 per cent from a year earlier.

The average 2016 price for detached houses, condos, townhouses and other housing types hit a record $691,144 in British Columbia and $535,931 in Ontario. Greater Vancouver remains the country's most expensive market, with the price of homes sold last year averaging $1.02-million, while the Greater Toronto Area placed second at $729,591.

The GTA tied with the Niagara region last year for the highest percentage gain in average prices at 17.3 per cent, with the B.C. Fraser Valley close behind at 17.2 per cent. Greater Vancouver saw the fourth-highest percentage increase among major centres in Canada at 12.7 per cent last year, though the West Coast market cooled off in the second half of 2016.

By contrast, the average home price in Saskatoon slipped 1.2 per cent while the Edmonton and Regina markets were flat last year. Average residential prices in 2016 edged up 1.1 per cent in Ottawa, 1.3 per cent in Halifax-Dartmouth, 1.4 per cent in Thunder Bay, 2 per cent in Calgary and 2.3 per cent in Winnipeg.

The Victoria area saw the sharpest jump in residential sales, rising 27.5 per cent last year, followed by the Niagara region's 21.6-per-cent climb. But the number of transactions year over year fell 7.5 in Saskatoon, 6.8 per cent in Edmonton, 6.1 per cent in Calgary and 5.2 per cent in Greater Vancouver and Hamilton-Burlington.

"Upward price pressure remains highly regionalized in Canada and concentrated in pockets of Southern Ontario" and parts of British Columbia such as Victoria and the Fraser Valley, RBC's Mr. Hogue said.

In October, Canada Mortgage and Housing Corp. issued a "red warning" for the country's real estate market as a whole. The federal agency cautioned that with many suburbs near Vancouver and Toronto already seeing prices spike, pressure is spreading even farther out as some buyers search for homes in bedroom communities. 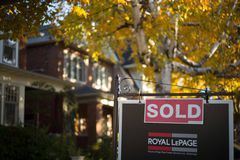