The number of train derailments, deaths and other mishaps on Canadian railways rose by 21 per cent in 2017, outpacing the 4-per-cent rise in rail traffic.

The 1,090 railway occurrences in 2017 exceed the five-year average of 1,028 tallied by Canada's Transportation Safety Board, an independent government agency that investigates rail, pipeline, aviation and marine incidents.

Kirby Jang, director of rail and pipeline investigations at the TSB, said the agency is closely watching the numbers of main-track derailments and crossing accidents, which pose the most danger to life and property. But he said the report issued on Tuesday does not contain enough data to signal any trend.

Most of the rise is due to an increase in collisions and derailments in rail yards, which happen at slower speeds with limited damage, he said by phone.

The TSB released its report amid a review of Canada's railway safety laws and regulations launched last year by Marc Garneau, Transport Minister.

The review of Canada's rail safety regime is part of the government's response to the July, 2013, explosion of an oil train in Lac-Mégantic, Que., that killed 47 people. The tragedy highlighted the risks of running longer, heavier trains bearing volatile oil, a business that grew swiftly after 2011 amid rising crude production and a shortage of pipeline capacity.

In 2017, railway accidents involving dangerous goods rose by 15 per cent to 115. This is below the five-year average of 127, according to the TSB.

Rail-related deaths reached 77, up from 66 in 2016 but two fewer than the five-year average. Fifty-three of the 2017 deaths were people unlawfully on rail property and 19 occurred at road crossings, the TSB said in its report, which also covered marine, air and pipeline transportation.

Through a spokesperson, the head of the Railway Association of Canada declined to be interviewed.

In a statement, the industry group said: "Since 1999, RAC members have invested more than $25-billion in their infrastructure in Canada to ensure a safe and efficient network. These investments have helped Canada's railways achieve a strong safety record. The rail industry is committed to working with regulators, communities and stakeholders to continuously improve safety."

CN has said the sharp rise in freight, harsh weather and derailments have led to "track outages" that slowed overall train velocity in 2017. CN's main rail line between Edmonton and Saskatoon was closed for three days in October after high winds blew rail cars off a trestle.

In air travel, the TSB said commercial operator accidents rose after five years of declines. The TSB said this is partly due to a rise in training accidents. There were 239 aviation accidents, just under the five-year average. The number of incidents rose by 10 per cent. The year also saw the first known collision between a drone and a commercial airplane.

Marine accidents fell by 10 per cent. The fishing industry accounted for three of 11 fatalities. The TSB notes fishing deaths have declined but so have the number of fishermen and vessels.

TSB calls for improved safety after man in wheelchair killed by train
February 15, 2018 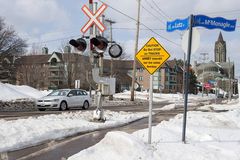 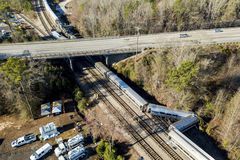 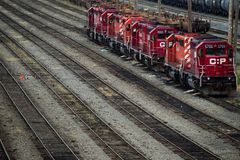