The Montreal-based president of CCM Hockey says the announcement that owner Adidas AG plans to sell the brand is a "great opportunity" for the long-time Canadian brand to increase its hockey-equipment market share.

"We're already very happy that we're going to report to a new owner that will be more invested in this equipment category, and will help us to continue to drive the brand, and to invest in R&D and operating efficiencies," said Philippe Dubé, who has served as president of the subsidiary since 2010, in a phone interview.

Adidas revealed in its 2016 annual report Wednesday that the company would be actively seeking a buyer for the skate, stick, helmet and other hockey-gear business as part of a multiyear plan to renew its focus on athletic footwear and apparel, and shed unrelated business lines. CCM is the latest after announcements to divest brands such as Mitchell & Ness, TaylorMade, Adams Golf and Ashworth.

The brand – worn by the likes of NHL stars Sidney Crosby, Connor McDavid and Carey Price – first launched as an Ontario bicycle company in 1899, but soon pivoted to hockey skates. It has been a stalwart of both hockey and Canadian identity ever since; the first C stands for Canada. Mr. Dubé said the brand intends to remain headquartered in the Montreal area, and that a new owner would help renew its focus on developing and growing market share for its skates and hockey equipment.

"We are made of hockey, and we are Canadian," he said.

Earlier this year the owner of CCM rival Bauer, Performance Sports Group Ltd., was sold for $575-million (U.S.) to Sagard Holdings Inc. and Fairfax Financial Holdings Ltd. after filing for bankruptcy protection. After many potential buyers steered clear of the distressed company, no other bidders came forward.

Mr. Dubé declined to name any prospective buyers this early in the process, but is optimistic of a sale. "In the past few months, if not years, I've received so many phone calls about, 'When are you guys going to be on the market?'" he said. "We are an attractive company, an attractive brand for a number of people."

He said the search will take at least a few months.

CCM Hockey was No. 2 in the Canadian equipment market by dollar share as of about a year ago, with 17 per cent, said Julian Savory, chief executive of the Canadian Sporting Goods Association. Combined with Reebok-branded gear, also owned by Adidas, it commands close to 27 per cent of the market – behind Bauer, which holds 34 per cent.

Mr. Savory said CCM is catching up to Bauer "very, very quickly," but that the lacklustre response to Performance Sports Group's sale could make it hard for Adidas to find a buyer for the brand. The broader $400-million ice-hockey market in Canada, he said, has itself declined 8 per cent year-over-year.

"As a potential investor in a product category that requires so much capital for expenses – in terms of product development, prototyping, marketing costs and licensing fees – is it a good business investment to be in?" Mr. Savory said.

Still, because CCM has shown growth against its competitor, he said this might be a wise time for Adidas to divest.

Net sales for CCM Hockey fell about 14 per cent in 2016 over the previous year, according to Adidas's annual report. The equipment market was "difficult" last year, Mr. Dubé said, as major customer, retail chain Total Hockey, filed for bankruptcy, and CCM transitioned its licenses from Reebok to Adidas. But he said the brand had "tripled" its market share in the past three years, and was poised for double-digit growth in 2017.

The company has been redeveloping its high-performance skate products, revealing new Super Tacks skates in 2016 and revising its Jetspeed skates this year.

The brand was acquired by Reebok in 2004 when it was owned by The Hockey Company. Adidas took over Reebok the following year. Mr. Dubé said the company has had a great deal of autonomy under Adidas – handling research and development, marketing, sales and more on its own – and hopes that continues under a new owner.

"We have very limited links with the Adidas group right now," he said. "That's why, for us, there is no disruption risk, because we're already operating as a standalone entity." 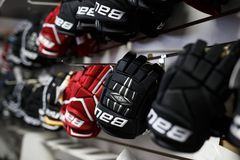