Aecon's competitors are asking Ottawa to block the takeover on the grounds that China Communications Construction Co. Ltd. (CCCC) – which is one of the world's largest infrastructure companies – has a poor track record when it comes to safety and corruption, and that a state-controlled Chinese entity is not suited to work on projects with security concerns, such as the refurbishment of Ontario nuclear power stations and building military facilities.

In the past, Aecon, which is based in Toronto, helped to build domestic power plants, along with prominent projects such as the CN Tower and Vancouver's SkyTrain.

A delegation from domestic construction heavyweights PCL Constructors Inc., Ledcor Group and P.W. Graham & Sons Construction met last Thursday in Ottawa with senior civil servants in the federal Department of Innovation, Science and Economic Development, which must approve the Aecon takeover, according to sources who took part in the meeting.

The session was part of a last-ditch campaign to stop a deal that would make CCCC a significant player in a booming domestic construction market. Spokespersons for PCL, Ledcor, Graham and the federal government declined to comment on the Ottawa meeting. 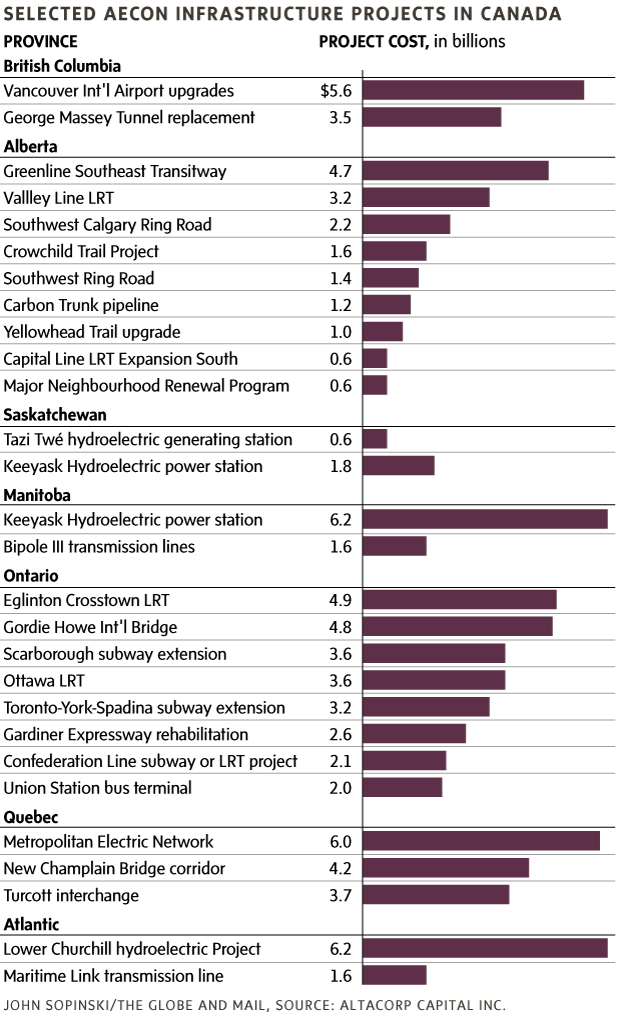 Aecon's board of directors put the 140-year-old company up for sale in the summer, in part to find an international partner and compete for larger projects and also in response to pressure from an activist shareholder who wanted to see the stock price rise, and announced a deal with Beijing-based CCCC in October. Aecon shareholders voted overwhelmingly in favour of the takeover in December. The deal received the blessing of Canada's competition watchdog and Chinese regulators last month.

The final regulatory hurdle is approval from the federal government under the Investment Canada Act. The government review is expected to be completed by Jan. 26, although Ottawa can extend it. Innovation Minister Navdeep Bains's department on Tuesday declined to comment on the Aecon takeover, including the length of the review, whether it was being extended and whether it is subject to an official national security review, the most stringent available process for assessing threats from a foreign takeover, and one that China has called a protectionist manoeuvre.

Many industries are wary of takeovers by state-owned entities, which do not have to focus on profit and can undercut competition and distort the market.

CCCC is 63-per-cent owned by the Chinese government. National security agencies in Canada and the United States have warned that companies owned or partly owned by the Chinese government are not merely commercial operations; they are also prone to passing on information or technology to Beijing and making business decisions that could conflict with Canadian interests but serve the agenda of the Communist Party of China. In recent years, the construction company, which has 118,000 employees, helped China assert sovereignty over the disputed South China Sea by building artificial islands, and CCCC was barred until recently from bidding on World Bank projects because of an acquisition's "fraudulent practices."

On Tuesday, Aecon chief executive John Beck said the sale to CCCC "will make Aecon a much stronger company that will continue to be managed by Canadians according to our existing values and with thousands of Canadian employees working in communities across the country. This is good news for our customers, employees, partners, taxpayers and other stakeholders."

A spokesperson for CCCC said the company remains committed to acquiring Aecon and repeated what its president, Lu Jianzhong, said at the time of the announcement: "Aecon … will now gain access to significant capital, complementary infrastructure expertise and an international network to support its growth ambitions."

Bob Blakely, Canadian operating officer for Canada's Building Trades Unions, said his organization supports the deal because a better capitalized Aecon means more work for the members. "As a general rule, businesses get acquired all the time by national and international firms, and, generally speaking, the result isn't fire, famine and plague," he said.

CCCC acquired a major Australian construction firm more than two years ago and expanded it using local management, a track record that Mr. Bout said will help the Chinese company "pass the net-benefit test" in Canada. The CIBC analyst wrote: "Another factor to consider is that while the NAFTA negotiations continue, thinking global (including talks for a potential free-trade deal) will be important to the federal government."

The three rival construction firms are attempting to freeze out CCCC at a time when Canadian governments are planning massive infrastructure spending. The federal government alone is expected to spend $185-billion on infrastructure projects over the next decade, according to a report on Thursday from AltaCorp Capital. Globally, the construction industry is consolidating around its largest players, and even the biggest firms are struggling. Over the weekend, Britain-based Carillion PLC, which has 6,000 Canadian employees, collapsed after running into financial difficulties.

The Trudeau government did not immediately respond when asked to comment on concerns raised by the construction companies. 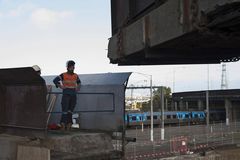