Air Canada is touting its Canadian credentials as it introduces a fresh look for its staff uniforms and fleet of planes for the first time in a dozen years.

The country's largest airline unveiled its new livery at rebranding events for customers and employees on Thursday at airports in Vancouver, Toronto and Montreal.

In keeping with the patriotic marketing theme, the Canadian flag will be painted on planes next to the registration letters, near the tail.

Calin Rovinescu, the Montreal-based carrier's chief executive officer, and Ben Smith, president of passenger airlines, said they are proud to be leading Canada's flag carrier that represents the country at airports around world.

"We are an 80-year-old iconic Canadian company that takes our role and our duty to represent our country very seriously," Mr. Smith said in an interview. "The biggest billboard is the tail of our airplanes."

The current paint scheme on planes features the red maple leaf set in a dotted pattern on the aircraft's tail. The new version is a black backdrop on the tail, with the red maple leaf encircled, harkening back to the rondelle (circular) design of the past.

Back on stable financial footing for the past several years, the airline is hoping to distinguish itself amid fierce battles on overseas routes.

Competition is especially stiff for luring passengers who connect through Canada on international routes, Mr. Smith said. Rival carriers include those operating from New York, Chicago, Detroit, Seattle, Atlanta, Miami, Amsterdam and Seoul. "We're not taking anything for granted," he said. "The true goal is to build a company that's in it for the long term for all stakeholders."

About 300 planes will get the rebranding treatment, although Air Canada's Rouge leisure unit will retain its separate look with red and white. Rouge recently had 46 jets in its fleet.

Canadian-born Tyler Brûlé, now based in Britain, designed the new look for the airline's planes. Gradually repainting the aircraft will take about four years while uniforms for more than 20,000 staff will be phased in during 2017.

Air Canada emerged from 18 months of bankruptcy protection in the fall of 2004 – the last time that it unveiled new designs for uniforms and aircraft. Back then, Canadian pop star Celine Dion helped usher in blue as the dominant colour in marketing campaigns.

In October, 2004, she performed in front of Air Canada employees, belting out a three-song set as she wore the "midnight blue" uniform.

This time around, Ms. Dion and blue aren't part of the makeover. Instead, Air Canada is now emphasizing black or charcoal grey in its uniforms, as well as red accessories, such as ties, belts and scarves.

Renee Smith-Valade, Air Canada's vice-president of in-flight service, said Thursday's announcement goes well beyond uniforms and paint, underlining the carrier's global ambitions. "We have to be at the top of our game to compete in the markets that we are now flying into," she said.

Aviation buffs will be scrutinizing the fine details in the appearance of an array of planes.

The top of the fuselage remains mainly white, but with Air Canada in black capital letters instead of the current red. The engines will be painted black.

The airline is paying respect to its past while looking to the future, said Air Canada chief operating officer Klaus Goersch.

Labour relations have improved significantly over the years, he added. "It was a smart decision on everybody's part to get long-term labour peace. Because if you don't have that, you find yourself in protracted labour negotiations every year and you take your eye off the ball of the business. It has been a game shifter, for sure." 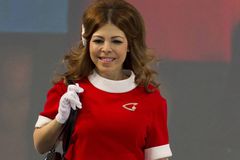 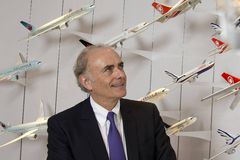