Airbus Group SE has alerted U.S. authorities that it might have breached rules on military-arms exports, an unexpected disclosure that extends the European plane maker's regulatory trouble to North America as it works to finalize a partnership with Bombardier Inc.

The France-based jet manufacturer said on Tuesday that following an internal review of its U.S. regulatory compliance procedures, it discovered "certain inaccuracies" in applications for defence export licences to the U.S. Department of State and informed regulators about them. The company said it is co-operating with U.S. authorities and can't estimate how long it could take to resolve the issue.

The development adds the United States to the list of countries where Airbus faces regulatory scrutiny over its business practices. The company is already under investigation in Britain and France over the possibility it used middlemen to pay bribes that helped it win commercial aircraft contracts. Germany and Austria have launched investigations into the purchase of Airbus jet fighters.

The probes have shaken investor confidence and raised doubts about Airbus's ability to execute a deal to take control of Bombardier's C Series airliner program in the months ahead.

Additional regulatory trouble in the United States now raises questions about how that country will respond to Airbus. Chicago-based Boeing Co. has been battling Airbus for years over state aid and also launched a trade challenge against Bombardier over the legitimacy of the C Series.

In an industry that relies heavily on ties with government, Airbus now faces the prospect of probes in the United States and could be frozen out of future contracts, The New York Times reported.

"Ordinarily, I wouldn't think that there would be much read-through [from this] with respect to a commercial aviation deal like the Airbus-Bombardier arrangement," said Dan Fong, an analyst with Veritas Investment Research in Toronto. "However, this is clearly a very different U.S. administration than we have ever seen, so I would not be surprised to see the Airbus-Bombardier deal be swept up into more politics than the C Series has already experienced."

Bombardier spokesman Simon Letendre said the company does not expect Airbus's U.S. defence issues to impact the C Series partnership. "We don't see this as an issue," he said.

Airbus said it continues to do business in the United States "as usual."

Airbus chief executive Tom Enders wrote a letter earlier this month warning staff that the company could face "significant penalties" as a result of the investigations. Chairman Denis Ranque was subsequently summoned by the French government to outline the measures put in place to end alleged bribery practices and curb the involvement of third-party sales agents, according to Bloomberg.

The use of third-party agents is also at issue in the United States. Harald Wilhelm, Airbus chief financial officer, told reporters on a media call on Tuesday that the violation related to the company's failure to properly document the outside sales agents used to help broker defence equipment deals. The relevant rules fall under a section of the U.S. International Traffic in Arms Regulations policy that requires proper disclosure of political contributions, fees and commissions.

Bombardier announced an agreement with Airbus on Oct.16 that will see it relinquish majority ownership of its C Series program to the European plane maker for no cash consideration. In exchange, Airbus agreed to put its global sales and logistics power behind the C Series in a bid to make it a commercial success. Airbus will launch a C Series production line at its Mobile, Ala., assembly facility, a move the partners say will allow the aircraft to become a domestic product and escape preliminary duties of 300 per cent imposed on C Series imports into the United States.

Boeing, whose trade challenge against the C Series led to the duties, says building the aircraft in the United States won't allow Bombardier to skirt U.S. rules. "The law prevents subsidized foreign manufacturers who have dumped their products into the U.S. from evading its requirements in this way," Boeing spokesman Charles Bickers said in an e-mail. "Any C Series planes, or parts of planes, imported into the U.S. will pay the duty."

Opinion
Airbus lowers its defences and invites a thumping from Donald Trump
October 31, 2017 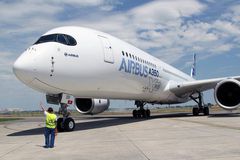 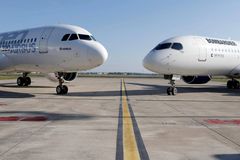