Cheaper avocados at Whole Foods Market might get fans of the organic grocery chain salivating over savings, but retail analysts say it probably won't launch price wars at Canadian supermarkets.

Amazon.com Inc. took ownership of Whole Foods on Monday and immediately decided to cut the cost of some of its pricey organic and specialty foods, an approach that's designed to resonate directly with the chain's best customers and create buzz in the marketplace.

Among the items reduced at a Vancouver Whole Foods location this week were Colombian Hass avocados, which are now $1 cheaper at $1.99 each, and organic baby spinach, which costs $3.49, or 50 cents less than a week ago.

Elsewhere in the store, organic black quinoa has been reduced by 80 cents per 100 grams to $1.59 and Whole Foods' private label organic vanilla-flavoured almond beverage is $1 cheaper at $2.49.

But the Whole Foods price cuts won't be particularly effective in attracting consumers on the hunt for deals, said Mark Lee, associate professor at the Ted Rogers School of Retail Management.

"Whole Foods is already marked up quite high," he said. "The price reduction is really just getting back to the level of regular grocery prices."

The country's biggest grocers are unlikely to play along with deep cuts by Whole Foods' new owner Amazon in the aisles of its 13 locations across Canada. That's partly because the imminent threat of the high-end chain wouldn't justify the financial hit of reacting with deep discounts, suggested Brynn Winegard, a marketing expert at Winegard and Company.

"Places like Loblaws, Sobeys and Longo's won't necessarily be able to afford that," she said.

"But what you will be looking at is a huge market play towards loyalty."

Winegard expects established chains to lean on their reputations – and points-redemption programs – in hopes of keeping customers from straying to competitors in the short term.

Expect better deals on taking home three bottles of spaghetti sauce instead of two, for example, and more appealing bonus point offers designed to get customers back into stores. Both are generally more affordable, and effective, strategies than deep cuts to a wide assortment of products.

Price wars have a long history of offering Canadian grocers little upside, especially if their profit margins are cut to the bone. It's happened in the past, most notably when Wal-Mart Canada Corp. bulked up its food offerings nearly 10 years ago and some chains dropped prices in response.

Ms. Winegard says those fights usually only generate "short-term wins" for the retailer when they should be focused on the big picture of an evolving industry where Amazon is looking to get a stronghold on the Canadian shopping basket.

"I don't see adequate evidence that our existing oligopolies are really hedging against those competitive threats," Ms. Winegard said.

"It's almost as if they don't take [it] seriously or don't think it will be real – and it will be very real in the next couple of years."

Prof. Lee suggested Canadian grocers are misdirecting their attention to storefronts, rather than establishing infrastructure that could go head-to-head in the digital world, Amazon's forte.

"Amazon certainly has the capacity, the capability and the website support to do this – the other stores, like Loblaw and Sobeys, aren't really there yet." 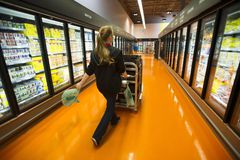