Apple Canada Inc. has demanded that Ingram Micro Inc. stop selling used iPhones in Canada after the distributor struck a deal to supply the devices to Wind Mobile Corp., according to sources.

Wind has been selling refurbished iPhone 5c and 5s models directly to its wireless customers since June.

Ingram distributes iPads and Apple accessories on behalf of Apple in Canada and does business with the Cupertino, Calif.-based company worldwide.

Ingram's interpretation of the contract was that the distribution of used iPhones was not a breach and it expressed concern about cutting off Wind's supply of the device, but ultimately said it wanted to co-operate with Apple, the sources said. Reached for comment on Tuesday, a spokesperson for Ingram did not respond ‎before publication deadline.

The demand comes as Canada's competition watchdog investigates Apple for allegedly leveraging the popularity of its devices to include anti-competitive clauses in its contracts with Canadian wireless carriers.

The probe, launched in March, 2014, remains in the fact-gathering stage. While the Competition Bureau has won court orders for disclosure from Apple and Canadian carriers, it has not made a decision to bring an enforcement action against the U.S. technology company.

Apple's decision to demand that Ingram stop selling used iPhones to Wind could have been prompted by a request from BCE Inc.'s Bell Mobility, according to the sources. Bell was said to be upset about Wind being able to access the Apple product and planned to ask Apple Canada to shut the supply down, the sources said. (BCE owns 15 per cent of The Globe and Mail.) Ingram also supplies Bell Mobility with "peripherals" such as cases and chargers.

Darrell Etherington, a spokesman for Apple Canada, declined to comment on Tuesday.

Wade Oosterman, the former head of Bell Mobility who was promoted to group president of Bell Canada in April, has been on Ingram Micro's board of directors since September, 2013.

Wind customers have been able to use certain unlocked iPhone 5 and later models since 2013, when Apple began adding support for the AWS (advanced wireless services) spectrum band, which is what Wind used to build its network.

However, that required customers to buy their own devices outright – whether from Apple or another carrier or retailer – and Apple has never agreed to sell the iPhone directly to Wind, which would allow it to offer appealing up-front subsidies on the handsets.

Wind believed it found a way around that problem when it reached a deal to buy 50,000 used iPhones from Ingram, which sourced the devices from U.S.-based Brightstar Corp. Wind began selling the refurbished and restored devices – which it markets as "lightly loved" – in June.

Before that, the small carrier already had about 25,000 customers using their own iPhones on its network, according to Wind chief executive officer Alek Krstajic, who said that being able to sell the used devices directly helped the company better serve price-sensitive customers.

Mark Langton, a spokesman for Bell, said he could not comment on "contractual matters between Apple and any of its other partners," but he said Bell did look into whether it, too, could sell used iPhones after finding out Wind was doing so.

"We became aware that resale iPhones were available in the Canadian market," Mr. Langton said in an e-mail on Tuesday. "When we investigated to determine whether we could also sell them, Apple made clear our agreement prevented us from doing so."

"We spoke to Apple and Ingram only about the possibility of Bell also selling resale phones," he added in a later e-mail.

Apple has direct-distribution agreements with all other Canadian carriers, including the Big Three as well as regional players Manitoba Telecom Services Inc., SaskTel and Eastlink Wireless.

Apple is known to be highly controlling about its brand and reputation for quality, and industry sources say in addition to volume commitments, it is concerned with wireless providers' network quality.

Wind, which said it had 800,000 customers as of December, is planning network upgrades, but so far does not have an LTE (long-term evolution or 4G) network and its 3G coverage can be spotty.

Apple maintains a list of wireless carriers on its website that have "certified their LTE network on iPhone" and the Canadian list does not include Wind Mobile. 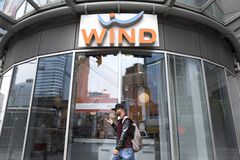