Valeant Pharmaceuticals International Inc. is giving its investors plenty to worry about. Even so, investors in its $31-billion (U.S.) of debt have been a relative picture of calm.

In the two weeks or so since the company delayed releasing earnings, disclosed a new U.S. regulatory probe and saw the resignation of a prominent executive, its stock has tumbled 14.5 per cent, outpacing the 2.4-per-cent loss in the company's bonds, according to Bank of America Merrill Lynch index data.

The creditors, who are protected by debt covenants that would give them the right to put the company into technical default for failing to release its earnings on time, are showing patience that chief executive officer Michael Pearson can stick with a promise to halt its acquisition spree and cut leverage. Even if the company's earnings fall short of expectations, they see value in the drug maker's underlying businesses.

"When you're a high-yield bond holder, you have skin in the game with management – you want them to pull this off," said Scott Kimball, a Miami-based portfolio manager at Taplin Canida & Habacht, part of BMO Global Asset Management, which oversees $237-billion of assets. "We don't foresee them having any liquidity issues in the near future. "

Mr. Kimball's firm bought Valeant's bonds when they were selling at a discount last year.

Valeant's massive debt load has made it a virtual must-own for the biggest mutual-fund managers who are evaluated on their ability to outperform the broad high-yield debt market. With $31-billion of outstanding bonds and loans, the company is the fourth-biggest issuer in the Bank of America Merrill Lynch index of high-yield bonds. Not owning the debt could mean missing out on a big rally, such as when Valeant's bonds gained 12 per cent from November to December of last year.

That's what happened to Los Angeles-based money manager Payden & Rygel, which got rid of Valeant debt when the drug maker first started making headlines for its pricing practices.

"It hurt us last year when they rallied but we've been shielded from the volatility recently," said Sabur Moini, global head of high-yield at the firm, which oversees about $95-billion of fixed-income assets. "We were concerned because they'd grown so quickly all through acquisitions. There's going to be scrutiny toward acquisitive companies like that."

Confidence about the strength of the business coupled with pressure to own the debt may explain why prices on Valeant bonds have held up since it pulled its financial guidance and Pearson as chief executive officer, even though the company's failure to file a 10-K on time technically breached reporting provisions under its bond indentures.

Still, investors have priced risk into the company's credit-default swaps, which can be used to hedge against default. The cost of protecting Valeant debt from default over five years is at 593.7 basis points, or $593,706 for $10-million of borrowings, from about $300,000 in September.

The missed filing could've been considered a breach of the company's debt agreement, allowing creditors to demand accelerated repayment, had enough bondholders notified the company of the breach, and had Valeant then failed to produce the reports within 60 days of the initial notification.

Creditors have little incentive to enforce the violation, Kimball said. "If you invested in Valeant and you knew they had problems – would you exacerbate that by making them go to bankruptcy court or by making them take up a bondholder dispute now?" he said.

'Largely Intact' Valeant plans to discuss preliminary fourth-quarter results and update 2016 financial guidance on March 15, the company said on March 7. The new guidance will probably be lower than what Valeant had previously told investors, but cash flows are likely to "remain largely intact," CreditSights Inc. analysts led by Eric Axon wrote in a note this week.

The drugmaker said in October that its Ebitda – earnings before interest, taxes, depreciation and amortization – would grow to $7.5-billion in 2016 and reiterated a commitment to bringing net leverage below 4 times Ebitda by the end of this year. At the time, company executives warned that disruptions to its dermatology business would be significant in the short term. Pearson said the neurological business would suffer after the company was forced to offer "significant" discounts on some of its drugs.

Valeant will likely be able to reduce leverage in 2016, albeit by less than expected, even if it slashes earnings expectations by 10 per cent, Axon wrote. A haircut of that magnitude would leave the company $1.4-billion of discretionary free cash for 2016 after paying off mandatory obligations. The drugmaker had been planning to reduce debt by $2.3-billion this year.

"We do not foresee liquidity issues for Valeant, even under a scenario where outsized fines are levied against the company," wrote Axon, who expects prices on the bonds will outperform.

Valeant CEO’s calls with analysts raise hackles over disclosure
May 16, 2018 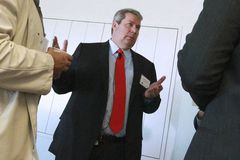