Amaya Inc.'s former chief executive confirmed Wednesday that he does not have the backing of a Dubai-based investment firm in his proposed takeover of the Canadian online gambling company, raising further doubts about the multibillion-dollar privatization.

David Baazov, who is spearheading the bid for Amaya, said in a statement that a document outlining KBC Aldini Capital Ltd.'s financial support of the deal was sent without the Dubai firm's consent. On Tuesday, the Globe and Mail reported that KBC's top executive had denied any involvement in the deal, saying he had "no knowledge" whatsoever of the transaction and had never even heard of Amaya. Last week, regulatory filings from Mr. Baazov had named KBC as one of four international funds due to commit a combined $3.6-billion. Despite Wednesday's revelation, Mr. Baazov says he is pressing on with his plan to take Amaya private and plans to line up "replacement financing."

"David Baazov today confirmed that he has been advised by representatives of KBC Aldini Capital Limited ("KBC") that the equity commitment letter purported to be delivered to Mr. Baazov on behalf of KBC was delivered without KBC's knowledge or consent and that KBC has not committed to provide financing for the proposed acquisition of Amaya," Mr. Baazov said in a release on Wednesday afternoon. He declined further comment.

Kalani Lal, founder and chief executive of KBC told the Globe on Tuesday that he had filed a complaint with the U.S. Securities and Exchanges Commission (SEC) based on what he alleges was Mr. Baazov's "fraudulent use" of KBC's name in a securities filing relating to the deal. In a telephone interview on Wednesday from Dubai, Mr. Lal said that he had also filed a similar complaint with the Ontario Securities Commission (OSC).

"We would like to file a complaint and seek your assistance to file a legal case against Amaya Inc. and David Baazov," KBC's compliance official wrote in a letter to the OSC on Wednesday that was reviewed by the Globe.

Mr. Lal also described a meeting that had taken place on Wednesday morning in Dubai between one of his KBC colleagues and a banker from Canaccord Genuity Group Inc. The banker had brought with him what he said was a letter of intent that showed that KBC had committed to contribute equity to the buyout of Amaya, Mr. Lal said. (Canaccord Genuity is the financial adviser to Mr. Baazov.)

Almost right away it became apparent to the KBC representative that the document appeared to be a fake, Mr. Lal said.

"We have a set format of our letterhead, signatures and wordings," Mr. Lal said. "Nothing was matching."

Canaccord declined comment for this story. Goodmans LLP, the legal advisor to Mr. Baazov, did not respond to a request for comment.

Mr. Baazov's Wednesday statement did not address the involvement of the other three investment funds in his privatization bid. A thorough search by the Globe was unable to turn up any contact details for Ferdyne Advisory Inc. of the British Virgin Islands. According to a local registry it was stricken from the registry three years ago for non-payment of fees. Mr. Baazov did not respond to a request for comment on Ferdyne on Wednesday.

The other two equity investors named in filings are Head and Shoulders Financial Group and Goldenway Capital, both of Hong Kong. In an emailed statement to the Globe and Mail, Stanley Choi, chairman of Head and Shoulders said the firm is "working with" Mr. Baazov on the proposed transaction.

During a subsequent telephone interview, Mr. Choi declined to elaborate on the size of the company's financial commitment and did not comment when asked if Head and Shoulders had the financial wherewithal to support the deal.

Ricky Lai, director with Goldenway sent an e-mailed statement to the Globe: "Goldenway Capital is working with Mr Baazov on the Amaya transaction. We are in full support of David Baazov and are prepared to increase our commitment if so required in order to conclude a successful transaction." Mr. Lai declined further requests for comment.

Mr. Baazov is facing criminal charges in Canada in an insider trading case related to Amaya's 2014 $4.9-billion (U.S.) acquisition of Rational Group, the owner of PokerStars. None of the charges, which were brought against him by Quebec's Autorité des marchés financiers (AMF), have been proven in court.

The AMF, the financial watchdog with jurisdiction over the proposed privatization, declined to comment on the KBC developments in detail and would not say if it has launched its own probe into the matter. Amaya, meanwhile, did not respond to a request for comment on Wednesday. On Tuesday, Amaya said it was reviewing the Tuesday Globe story, and noted "there can be no assurance that Mr. Baazov's proposal will result in a definitive agreement."

The regulator continues to pursue an investigation into the activities of Mr. Baazov following insider trading charges against him in March of this year and said it is monitoring all developments related to the businessman. "It's all part of the big portrait," said AMF spokesman Sylvain Théberge. "We're listening. We're watching."

With a file from Janet McFarland 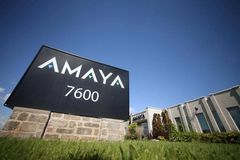